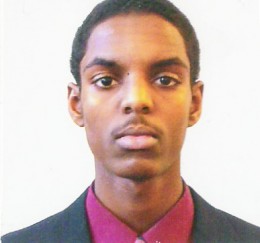 Born in Mada Walabu in the Bale Zone of the Oromia region in Ethiopia, he moved to Kenya at the age of eleven. After three years in Kenya without formal education, he arrived in the States in 2004.

With his Ethiopian third grade education and not a word of English, he was placed into sixth grade based on his age. After spending three years in Kenya doing nothing, eight-hour school days were simply unbearable. He couldn’t communicate with teachers and classmates.

As a result, he hated school. His only productivity was in counting down by seconds to the last bell when school let out. For months he was marked absent because he didn’t know how to say “present” when his name was called, or he ended up wandering the hallways unable to get to his classes and unable to ask for help finding it. People made fun of him in a language he barely understood. Bad grades became common. It took him six months to learn how to speak English, a year to write. That is Abdulatif Dire’s journey from rural Ethiopia to a mainstream classroom in Minnesota. Dire has recently won two of the most prestigious scholarships given to high school seniors in America, hence a reason for this interview.

Up until 8th grade, Dire spent time adjusting to new ways of life and learning a new language, a balancing act for anyone his age. Then there was a turning point. By the second semester of his 8th grade year, the ability to communicate in a new language and ask for help from teachers boosted his confidence. That year he went onto win the “Student of the Year” award from Higher Ground Academy. The Higher Ground Academy is a charter school in Saint Paul’s Midway neighborhood.

Dire then needed to make a change: moving to the Minneapolis public school system. The school officials at the academy objected, wanting him to stay. Outside of class, Dire had a love and skill for soccer. The soccer coach did not want to lose a star player. But a move was inevitable.

At first, Dire wanted to go to South High. But because other family members were attending or had recently graduated from Thomas Edison High School, he too became a Tommie. He recalls that Edison was a culture shock, but also a home. None of his classmates seemed to care about school, respect teachers or have any motivation. He smiles as he recalled friends telling him to “get off that stuff.” Being smart or even doing homework was seen as uncool. “Some students hated us, others respected us for minding our business in class and doing our homework,” Dire said. To be fair, this was before Edison went through a transformation. At the time, it was one of the lowest-performing schools in the district.

One teacher in particular, Mr. John Strand, Dire’s English teacher of many years, had a tough 9th grade cohort. “I remember kids were sent out of class every day,” he tells me. With classes easy to handle, Dire decided to add on other activities: he joined Upward Bound (a federally funded college readiness program for low income, potentially first generations students), Oromo club, Voyager, Edison’s Soccer Team, and Admission Possible.

One experience stands out from the list. A residential summer program at University of Minnesota through Upward Bound was like nothing he had experienced. Aside from inflexibility to partake in community activities, he had never lived in the dorms or eaten unfamiliar food.

His sophomore year, his GPA was high enough for him to sign up for Post Secondary Educational Opportunity (PSEO) at the University of Minnesota. PSEO marked another turning point in his educational career. As a junior, “I was taking two college courses and four high school classes,” Dire recalled.

Undoubtedly college classes were much harder. By this time Edison had gone through a lot of transformation – firing all teachers and hiring a new principal. But for Dire, the two worlds were in sharp contrast. “In high school, teachers grade your effort, always remind you of a missing work and sometimes let you retake a bad test; but in college it’s all you and your syllabus,” Dire recounts. He adds, “The college aged students were serious: most knew what they wanted to do and competed for each grade point.”

With two of the most prestigious scholarships under his belt, Dire is now a success story. He tells me, however, that none of it would have been possible without the help of those around him. Most notably his uncle Hangasu Wako and his soccer coach JeanPaul Bigirindavyi. “Education was the gospel” for my uncle, while JeanPaul “made me realize I could excel, if I just believe,” Dire recalls.

Dire laughs as he remembers his uncle making him choose between soccer and school. He recalls a conversation with Mr. Wako, after an all-weekend soccer practice. Mr. Wako had said, “We brought you here [America] to go to school… education or soccer, choose one and let me know of your decision.”

One of Dire’s challenges had to do with practicing his religion. A devoted Muslim, Dire proudly tells me, he never missed a prayer during school. I asked him how he did that given some prayer times are when school is in session. At first, “I was scared of asking and didn’t know how to ask, so I would simply walk out of class and pray in a corner,” Dire told me. When learning English eased that conundrum, he said, “I built relationship with teachers, remained consistent with my prayers and was truthful about what I wanted to do.”

I asked him the secret to his success in winning the Gates Millennium as well as Dells Scholarship. Abdulatif tells me, “I think the first step was believing that I could win. PSEO helped making a strong case that I was serious, and my extracurricular activities strengthened my application.” He quickly adds, “Early planning was also key because those scholarships require a number of essays and consume a lot of time.” Dire finished all of the eight Gates essays a month before the due date. Taking college writing, political science, and four other college courses, all of which that required college level writing, he acknowledges having “an edge over his peers.”

Dire’s story also had disappointments. Out of the seven scholarships he applied for, he was rejected by five. Yet, the two that he won together are far more prestigious and offer more money than all others he applied to combined. The Dell scholars receive a total sum of $20K, a brand new Dell computer and opportunities to use funds for summer classes or study abroad. The Millennium Gates Scholarship, perhaps the best and highest such award anywhere, covers all un-met needs throughout undergraduate studies with opportunities for renewal for graduate school through the doctorate level.

Dire is among the one thousand lucky recipients of this year’s Gates Scholarship out of the 23,000 that applied (a record high). As the award letter notes, the honor was bestowed on him in recognition of his leadership, community service, academic achievement and his potential as a leader in America’s future. In addition to participation in Academic Empowerment Services, Gates scholars also attend conferences where they can network with each other.

Abdulatif was a captain of Oromia 11-Stars (2010 July 4th State Oromo Soccer Tournament Champions), Minnesota Thunder-Plus (2008 State Champs) and the Edison soccer team. He has also been active at the Tawfiq Islamic Center, an Oromo mosque in North Minneapolis. Over the last couple of years, in addition to being a student and tutor, he volunteered as security at the mosque’s annual Islamic conferences.

Here is Dire’s bundle of advice to his younger peers:

Abdulatif credits all his teachers and those who helped him get to where he is today, most notably his nominator JeanPaul and his science teacher at Edison, Dr Hypolite. Dire will be studying Electrical Engineering and/or Pre-Pharmacy at the University of Minnesota Twin Cities. The Twin Cities campus where he spent the last two years taking classes and participating in Upward Bound activities is already a familiar niche. Despite the opportunity to live on campus without paying a penny or taking any loans, Dire plans to live at home.

We congratulate Abdulatif Dire on his accomplishments, thank him for his time and wish him the very best. Congratulation to all 2011 college and high school graduates. In closing, your success stories reminded me of a quote by Eleanor Roosevelt: “The future belongs to those who believe in the beauty of their dreams.” Shine on!