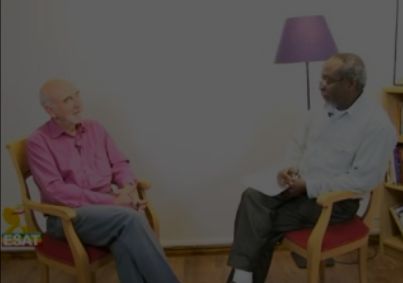 As an Oromo, I’m very grateful to Dr. Trueman for his principled stance in defense of human rights and for becoming a voice of the voiceless.

Throughout human history, few people, like Dr. Trevor, have contributed and continue to contribute to the well being of human kind, to the creation of good societies around the world, and to make this world a better place for all.

The interviewer’s questions were laden with baggage of mythologies that dominated events in Ethiopian empire for several decades. Most of his follow up questionnaires were appalling and relied on unsubstantiated facts and a panorama of prejudices.

The entire interview was full of ear piercing and mind-boggling illusions of the past that continue to intersect in the present. Of course, the interviewer has the right to his opinions but his views echoed prejudices often repeated by Ethiopian politicians.

It was clear that the interviewer’s views were influenced by a century old hegemonic/racist rhetoric and crude caricature whose memory traces are deeply embedded in the social DNA of those who subscribe to that line of thinking.

The prejudices reiterated and echoed in the course of the interview include: an attempt to deny historical injustices, questioning the very essence of Oromo national struggle, ridiculing the aspirations and gains of the Oromo liberation movement, and diminishing the size of the Oromo population, etc.

With regards to attempts to deny historical injustices, the interviewer wanted to sweep evil historical deeds under the carpet and tried to obscure the suffering of those subjected to heinous crimes. In fact, many who’re driven by their immoral access to immense benefits and privileges in the past share this same dilemma.

On the other hand, the subjects who suffered the atrocious crimes know full well what happened to them in the past, what is happening now and what those elements hope to restore in the future. Yes, they plainly know that barbarous atrocities of an extreme form, slavery, dispossession and relegation to status of serfdom, destruction of their institutions, suppression of their culture and language, racism and discrimination – and all sorts of historical injustices that occurred during the expansion, conquest and then after up to this very date. Those injustices don’t disappear. They linger and exist there for decades, for centuries even; until acknowledged, recorded and restorative justice is done.

The solution is not denial. Rather, breaking the silence and denial about loathsome past crimes. The remedy is putting in place measures that facilitate discovery of the truth about the heinous historical injustices, healing of the wounds inflicted on the subjects and preventing such crimes from happening ever again.

We’ve also heard arguments advanced by core minority groups questioning the essence of Oromo national liberation struggle, by simply labeling it as “ethnic politics,” dating back when Walelign Mekonnen debunked the whole notion of “Ethiopianism” stating that, “Ethiopia is not a nation; but a collection of nations (nationalities) ruled by Amhara.”

I’d like to highlight two points in this context: the impossibility of “difference blindness” (ignoring human differences and treating all individuals and groups equally) and the denial of the existence of nations within a multi-nation empire. Experts alike agree that the intention of rhetoric about difference blindness is to obscure the ulterior motives of hegemonic groups to gain upper hand in the cultural, political and economic spheres while relegating others to disadvantageous status.

Toward that end, this has been practiced in Ethiopia in terms of recognizing holidays; designing school curriculums and texts books; selecting heroes and naming places; deciding language of public services and media; labeling road signs and so on.

Besides, no Habesha (Semitic speaking people in Ethiopia and Eritrea) organization ever advocated for the identity and the demands of more than 80 nations/nationalities in the empire. In the his classic essay, ‘On the Question of Nationalities in Ethiopia’, Walelign succinctly observed, “Ethiopianism is a facade for Abyssinian nationalism and cultural domination. To be an Ethiopian you will have to wear an Amhara mask”. As such, it is a utopia of extreme form to talk of neutrality and/or blindness to the values, morality, culture and identity of one’s own social collectives.

Similarly, the core minority hegemonic group has been arguing for the non-existence of nations in the empire by employing misnomers such as ‘gosa’, and ‘zere’ for nations. Some of them go to the extent of confusing nation, ethnicity, race, tribe and clan.

There are numerous literatures in the field of sociology, anthropology and political sciences as to what they are and what they are not, where they overlap and differ. For instance, dominant groups who wish to obscure the concept of nation often use the term ‘gosa’, which etymologically derives from Afaan Oromo, out of context. The term Gosa denotes closely related social collectives of kinship that comprise a number of families.

The attempt to conceal the concept of nation is an absurdity of the highest order. Anthony D. Smith, Professor of Ethnicity and Nationalism at London School of Economics, defines a nation “as a named human population occupying a compact historic territory or homeland, sharing common myth and historical memories, a mass public culture, a common economy, a common legal right and duties for all members and distinct institution” (Smith, 1991, p: 14).

Dr. Smith makes a clear distinction between the concepts of national group and ethnic community. He defines ethnicity as “a named human population with myth of common ancestry, shared historical memories, one or more shared culture, a link with homeland, and measure of solidarity”.

It is clear that, while ethnic groups share some elements such as common name, myth and memory with nation, the center of gravity is different: ethnicity is largely defined by common ancestry, common myth and shared historical memories.

On the other hand, the historic territories they occupy, their common culture, and common institutions/laws collectively define nations. Accordingly, a nation must posses its homeland whereas an ethnic group need not. In the case of nation, a common culture encompasses all the members where as ethnicity may be confined to a segment of it. This indicates, the concept of nation includes both ethnic and civic elements, shared myths and memories, but the peculiar feature of a nation is that it has common institutions and/or laws that distinguish it from an ethnicity. The distinction between the concept of ethnicity and nation enables us to have a thorough understanding, recognition of cultural identities and values.

Concurrent to this, Oromo is neither a ‘gosa’ nor an ethnicity – it is a full-fledged nation. Those who deny this fact inappropriately use the terms to please their own ulterior motives. In the interview under discussion, the interviewer revealed the contempt he has for the aspiration of the Oromo people and tried to ridicule the hitherto gains of the Oromo liberation movement.

Despite a phony propaganda advanced by these groups with greater intensity and frequency, the Oromo people’s aspiration is about ending a century old political repression, economic exploitation and social subjugation. It’s about self-determination on these fundamental issues. The Oromo liberation struggle is about a nationalism of the oppressed nation against the nationalism of the oppressor. It’s the struggle of the invaded and conquered people against the invaders and conquerors.

Oromo people do not expect their oppressors and/or their inheritors to appreciate or accept their aspirations, for this has never been witnessed in history. Oromos do not expect chauvinists and reactionaries to recognize their right to self-determination and its exercise without bitter struggle. This is why the national liberation struggle was mandatory in the first place.

Thanks to the heroes and heroines who sacrificed their life, time and energy, the Oromo people have gained enormous achievements over the last several decades. Although Oromo’s present situation is as dire as before, today they speak, learn, write, communicate and work in their own language; their identity is strengthened on a firm foundation; their consciousness level has been raised and reached an invincible level; their cultural, artistic and literary works are flourishing, etc.

It is true that the struggle has stumbled on many fronts along the way. It continues to face internal and external predicaments. But this is hardly unique to the Oromos — all movements flounder and face difficulties. The African National Congress, ANC’s struggle is a case in point. ANC fought for more than 82 years to defeat Apartheid. Let there be no doubt that Oromos will rectify the struggle, reinvigorate their efforts and continue with the liberation struggle.

Last but not least, the demographic figure of the Oromo people is also a point of argument as can be witnessed from the reactions of the interviewer. Tainted with political motives, the total number of Oromo population varies from one speaker/author to another.

As can be observed, the interview was about denial and silencing of the Oromo voice. For there are enough propaganda machines in the hands of the Woyane regime, Oromos don’t need additional broadcaster to hatch more fictions. Such addiction to denial and fabrications must stop. Such warring philosophy, contempt for facts and truth must stop.

*Geresu Tufa is an International Business Management student and can be reached at geresu@gmail.com.

Opinions and other statements expressed by Opride Contributors and other third parties are theirs alone, not opinions of OPride.com.