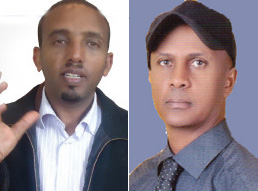 June 27 (Bloomberg) — An Ethiopian court convicted writer Eskinder Nega, a senior opposition activist and 22 others of terrorism offenses including plotting to overthrow the government.

Judge Endeshaw Adane today found members of the group, 16 of whom were tried in absentia since they are abroad, guilty of offenses including conspiracy to commit terror acts and having links with a banned U.S.-based opposition group, Ginbot 7, and neighboring Eritrea, which has hostile relations with Ethiopia.

Eskinder “wrote articles that incited the public to bring the North African and Arab uprisings to Ethiopia,” Endeshaw said. Evidence against the defendants was drawn from speeches, articles, e-mails, phone calls and social-media messages, he said to the Federal High Court in the capital, Addis Ababa.

Rights groups and a United Nations rights advocate have criticized Ethiopia’s use of a 2009 anti-terrorism law to jail politicians, aid workers and journalists opposed to the state. The government of Africa’s second-most populous nation says it prosecutes those responsible for breaking the law regardless of their profession.

Andualem Arage, who is a senior member and spokesman for the Unity for Democracy and Justice Party, and five exiled journalists are among the convicted, the judge said.

“I find the convictions of predominantly journalists and politicians raises questions about the compatibility of the anti-terrorism law with constitutional guarantees for freedom of expression,” the U.S. ambassador to Ethiopia, Donald Booth, said in an interview outside the courtroom.

Eskinder, who most recently wrote for the U.S-based Ethiomedia website, won the 2012 PEN/Barbara Goldsmith Freedom to Write Award from the PEN American Center on May 1. He was tried “on manufactured terrorism charges,” the center said in a May 2 statement. PEN describes itself as one of the world’s oldest literary and human rights organizations.

“Trials appear to have been motivated, at least in part, by the government’s fear of popular protests,” London-based Amnesty International said in a e-mailed statement today.

Sentencing will be on July 13, Endeshaw said. The prosecution didn’t request capital punishment and prison terms will be as long as 25 years, Unity for Democracy and Justice lawmaker Girma Seifu said by telephone from the capital today.