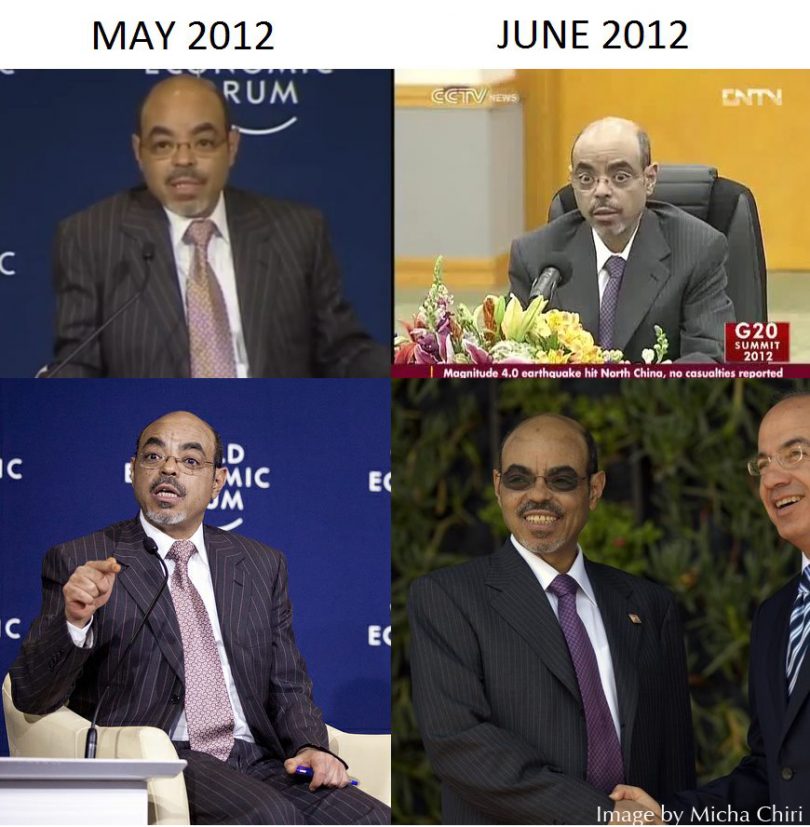 New York, NY– Ethiopia is gripped by two developments, one expected and the other unexpected. Notwithstanding the severity, the sentencing of Eskinder Nega, the recepient of Pen America’s 2012 Freedom to Write Award, was widely expected. By so doing, the Ethiopian judiciary, long criticized for its lack of independence, has unmistakenly equated writing critical of the government not only to treason but to “terrorism.”

The other news pertains to Ethiopia’s leader, Prime Minister Meles Zenawi. Unconfirmed reports of his terminal illness, or worse untimely death, has Ethiopian diaspora blogs, paltalk, and chat rooms buzzing. Why is the rumor machine in an overdrive?

One reason is Zenawi’s visible absence from the public scene. Since his appearance at G20 Summit in Los Cabos, Mexico last month, Ethiopia’s strong man of two decades has not been seen in public. He has subsequently missed key parliamentary sessions, foreign tours, speaking engagements, and media appearances, prompting the grapevine to go ablaze with talk of his affliction with a terminal illness.

Another reason is Zenawi’s pale and shockingly frail appearance during the G20 summit. When China’s CCTV aired footage of Zenawi’s meeting with Chinese leader Hu Jintao, Addis Voice noted, “he looked gravely ill and a ghost out of Michael Jackson’s Thriller video.”

Meles Zenawi has single-handedly dominated the Ethiopian political scene since coming to power in 1991. In an ethnically divided country such as Ethiopia, it is remarkable for a person of few means, who hails from a small community making up less than six percent of Africa’s second most populated country, to rise to the very top and stay there for so long.

While reviled by his opponents at home, Zenawi enjoys an unrivaled stature in continental and global circles. He had represented Africa in high-level climate negotiations. He’s been an unapologetic advocate of the so-called developmental state model. While trumpeting Africa’s growth trends as an economic renaissance, he harshly criticizes, what he calls, “limitations of the neo-liberal paradigm” to lift the continent out of the abyss. He is also mediating the conflict between Sudan and south Sudan amid a brinksmanship that threatens to send back the two nations into war. As a result, some academics had gone as far as dubbing him an intellectual heavyweight while also characterizing him as a street-smart, an imposter trying to fit the large shoe of a tyrant he had pushed out.

Tyrant that he had been all along, but also one who enjoyed the fortune of being utterly underestimated by his opponents. His mentor, Isayas Afeworki of Eritrea, was outmaneuvered, dealt a devastating military defeat and earned a pariah status. The Oromo and Amhara opponents, both of whom have a numerically superior constituency, did not think he would last long. Nor did his Tigrean comrades who fell out with him in 2001 thought that he would survive. Even after charging journalists and opposition leaders with terrorism using a vague anti-terror law – and forcing many of his opponents into exile – Zenawi remains darling of the West, and now the East.

Despite the recent frezy, there is little credible evidence of Zenawi’s health troubles. The whole drama is based on wild speculations. “It’s like the devout believing they’ve witnessed a miracle,” one Addis Ababa based foreign correspondent said about the rumors. A miracle many Ethiopians would cheerfully welcome. But so far, only one thing is certain: Zenawi has gone missing in action both in public and media, prompting a viral speculation about his “deteriorating health.”

If the rumor proved right, it would be interpreted as an act of providence, literally as if God has finally decided to do what many humans had tried but failed to achieve for three decades.

As he does once every four years, Meles has recently indicated his plans to call it quits after his current term ends. “I will retire in 2015 and probably teach at the leadership academy, maybe do some writing,” Zenawi told Richard Dowden, Director of the African Royal Society. While Zenawi’s assertion last May didn’t get any traction, the ensuing rumors got many asking, what if?

Under Zenawi’s leadership, the Tigrean Peoples Liberation Front (TPLF) weathered a myriad of challenges. The news of his reported illness has made many to muse about whether Tigrean domination would outlive his tenure.

Among the parties that make up the Ethiopian People’s Revolutionary Democratic Front, TPLF is still the best organized. Since the ousting of its popular chairman, Abba Dula Gamada, the group representing the Oromo – the country’s largest ethnic group –the OPDO, is totally in disarray despite supplying the bulk of party membership. Disarray or not, the Oromo is hardly a push over, either. The Amhara coalition partner, ANDM, is bereft of capable leaders at the top. But this did not dissuade ANDM members from aspiring for the top post counting on the vast Amhara opposition teeming with aspiring leaders, some too naïve to dream of restoring the Amhara domination in the name of saving the country from itself.

The Prime Minister has had stand ins. Zenawi’s first deputy, Tamrat Layne, was unceremoniously dismissed and thrown in jail on charges of corruption. The second deputy, Addisu Legesse, was sent into an early retirement. It is not clear how much the Tigrean oligarchy will be comfortable with the current deputy prime minister from the South, a man said to be groomed by Meles himself to ascend to the throne.

Unless there is a significant political realignment, which would take a long time to emerge, none of the many political groups outside of the system who have been opposed to the regime are in any position to make a serious bid. But it would be equally foolish to deny that the system will not be destabilized. Few dictatorships outlive their larger than life persona.

The TPLF is still firmly in control of the military as well as the security apparatus, the pillar of the regime’s stay on power. If the past is any guide, the real power in the governing coalition, the TPLF, would simply play the Amhara against their Oromo counterparts to safely course through the storm, if any. Among the Tigrean elite, Arkebe Oqubay, Abay Tsehaye, and Tewodros Adhanom are cited as possible replacements. There is also Sebhat Nega, the octogenarian kingmaker. Azeb Mesfin, the Prime Minister’s powerful wife, is said to have her own ambitions.

The viral rumors in Twitter-verse and blogsphere might just be much ado about nothing. Even if it is about something, the possibility that it would usher in a new era is more of a fantasy, an idle one at that, than a serious possibility.

In the interim, Zenawi’s anticipated absence from African Union’s Nineteenth Ordinary Session of the assembly of the Union and his planned banquet on July 15, would be closely watched and one big telling clue – lurking around the corner.