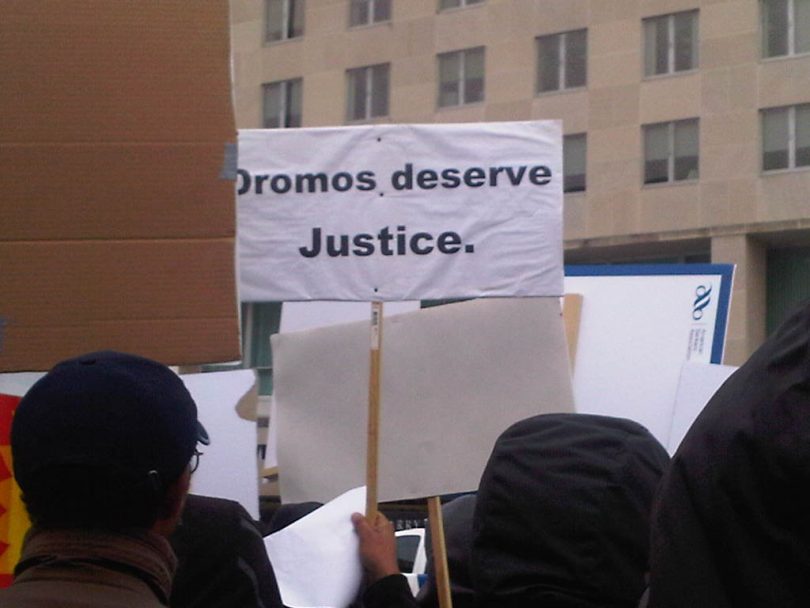 (OPride) — On Friday Jan. 25, several hundred Oromo immigrants staged concurrent demonstrations in Washington, D.C. and London calling for the release of political prisoners, respect of the constitution, and the establishment of rule of law in Ethiopia.

“We earnestly appeal to you and the US government to use your influence with the Ethiopian government and facilitate the release of all political prisoners and to take practical action to promote real democratic changes in the country,” the organizers said in a letter addressed to Secretary of State, Hillary Clinton.Hailed as “one of the fastest growing non-oil economies in Africa”, Ethiopia is among the biggest recipients of aid in sub-Saharan Africa (est. $3 billion a year). Ethiopia’s ruling party, EPRDF, came to power in 1991 promising decentralization of power and freedom but opted to centralize all decision making, turning ever more repressive in the face of mounting ethnic and religious grievances.

Tens of thousands of activists, professionals, intellectuals, and students, mostly of Oromo ethnic origin, remain incarcerated indefinitely while many non-Oromo journalists and opposition leaders are also serving long prison terms under that country’s anti-terrorism law. About 200 protesters from Washington D.C., and surrounding states braved bitter cold and gathered at the State Department to urge the U.S. government to condemn Ethiopia’s arbitrary arrests, kidnappings, torture, and killings of Oromo and other activists in the country. “Oromo students are not terrorists,” the crowd chanted.

In addition to condemning the widespread imprisonment of Oromos, the protesters called on Ethiopia to respect religious rights. Muslims in Ethiopia have been protesting what they say is a government interference in religious matters for over a year now. The government says the protests are spearheaded by few extremists while the sustained protests (attracting tens of thousands) remained largely peaceful and nonviolent. The committee of seventeen, a group elected to represent the protests at negotiations with government officials, were arrested last July and face charges of inciting violence and terrorism.In its yearly publication, Country Reports on Human Rights Practices, theState Department noted, “torture, beating, abuse, and mistreatment of detainees by security forces; harsh and at times life-threatening prison conditions; arbitrary arrest and detention; detention without charge and lengthy pretrial detention; infringement on citizens’ privacy rights, including illegal searches” as “the most significant human rights problems” in Ethiopia.   In a joint letter sent to the White House and Ethiopian desk at the State Department, the organizers said, without international pressure, Ethiopia’s glaring human rights violations, land-grab and displacement, and indifference for rule of law will persist unabated. “Unless international donors, mainly the US government, use their leverage and make meaningful pressure, the Ethiopian government will continue with political repression of the Oromo and other nations and nationalities,” the statement said.  “Therefore, we humbly request you to exert your energy and diplomatic skills to create conducive political environment for establishment of the rule of law in Ethiopia.”The campaign to silence legitimate Oromo dissent in Ethiopia has intensified in recent months. Last December, Ethiopia’s Federal High Court sentenced two prominent Oromo opposition leaders, Bekele Gerba and Olbana Lelisa to eight and thirteen years, respectively, under charges of “inciting a secessionist rebellion.” Seven others were given longer sentences for receiving training in camps in Kenya to fight against the Ethiopian government. Similarly, last september Oromo activists were stopped at various checkpoints and forced to take their clothes off on their way to the annual Irreechaa holiday. Some 200 activists were detained for wearing outfits adorned with the flags of the Oromo Liberation Front (OLF) and chanting anti-government slogans.

Established in 1973, the OLF has unsuccessfully waged a low-intensity guerrilla warfare to seek redress for Oromo grievances over the last four decades. EPRDF criminalizes Oromo dissent as a support for the rebel group.