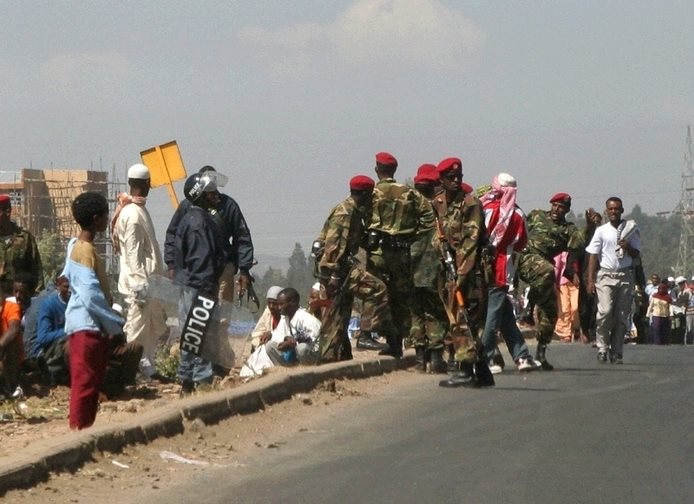 (OPride) – At least 11 people were killed, several others wounded, and scores arrested on Saturday in a clash between government forces and Muslim activists, eyewitnesses and social media reports said.

The skirmish in Kofele, Edoo, Wabe, and Qore towns in West Arsi zone of Oromia region left hospitals in Awassa and Shashamane crowded with wounded people, the reports said. Surrounding towns of Dodola and Asasa remained under military siege Sunday morning, eyewitnesses said. There are also reports of palpable tension in Shashamane.

The confrontation began after activists requested the release of three Imams – Mohammed Abdalla, Abdulkadir H/Kadir and Mukhtar Safi – arrested in Wabe town earlier this week. Locals began peacefully marching early Saturday morning from the town of Wabe to Kofele to petition regional administrators for the release of the arrested imams. Federal police tried to block protesters near a small town called Totolamo and later opened fire on peaceful demonstrators killing at least six, said one protester who gave his name only as Hussein due to fear of repercussions. Hussein said the whole area looked like a war zone, describing the scene of the confrontation as “full of panic and blood” clouded with tear gas.

The clash came following a statement in the government media that said the ongoing muslim protests will no longer be tolerated. Muslims have been protesting for religious freedom for close to two years. According to various reports on social media, the killing of peaceful activists in Wabe led to spontaneous demonstrations in the other towns. It was not immediately clear if all dead were from Wabe or other towns where similar confrontations with federal police was reported.

It should be remembered that, last Friday’s planned nationwide mosque sit-ins were called off by the activists at the last minute to avoid what the activists saw as government provacation and to prevent bloodshed.

The protests are expected to spread to the nearby towns of Asasa and Dodola towns on Sunday where tensions are already high. It is to be remembered that on April 27, 2012 at least four people were killed in the restive town of Asasa.

Activists say there is a widespread concern that next week’s Eid al-Fitr celebration marking the end of holy month of Ramadan may see further protests throughout the country. Last year’s Eid saw millions of Muslims chanting slogans critical of the government’s interference in religious practices.

In a related news, Bilal Radio journalists Darsema Dori and Khalid Mohammed were also arrested at the notorious Maekelawi prison in Addis Ababa. Bilal Radio on Saturday reported the two journalists were held incommunicado and denied visitation rights even by family members.

In a statement last month, the U.S. Commission on International Religious Freedom (USCIRF) called on Ethiopia to release jailed muslim rights advocates. “We are deeply concerned that Ethiopia’s government is seeking to silence peaceful religious freedom proponents by detaining and trying them in secret under trumped-up terrorism charges.  They should be released now and their trials halted,” said USCIRF Chair Katrina Lantos Swett. USCIRF warned that Ethiopia is repressing its muslim community under the guise of countering islamic extremism risking alienation and a possibility of violence.

Muslims make up about 34 percent of 93 million population in Africa’s second-most populous nation, according to CIA estimates. Thousands of Muslims across the country have staged weekly mosque sit-ins and street protests for nearly two years. The protesters accuse the government, among other things, of interfering in the Ethiopia Islamic Affairs Supreme Council by handpicking political operatives as leaders of the country’s highest Muslim Affairs body.

*The above photo purportedly from the scene of the conflict was shared by a Facebook user, Madda Islaamaa.