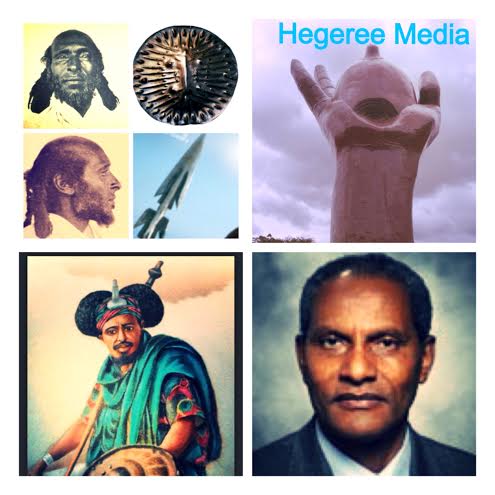 (OPride) – Hundreds of thousands gathered in Hetosa, Arsi zone of Oromia, the largest of Ethiopia’s nine federal states, for the unveiling of the Aanolee Cultural Center on April 6, 2014, local media reported.

The cultural center houses the Oromo Martyrs’ memorial monument, an ethnographic museum and a mural. Standing several inches on top of a tomb, the monument shows a severed hand stretched upward holding a women’s breast, also severed. It is erected as a tribute to the Arsi Oromo whose hands and breasts were mutilated by 19th century Ethiopian emperor Menelik II.

Located 150kms from the capital Addis Ababa, Aanolee is a site steeped in Oromo history. As Madda Walaabuu stood as the cradle and greatness of the Oromo, Aanolee came to represent its humiliation. For centuries, the Oromo were organized under an egalitarian Gadaa system. It was at Aanolee that power transfer took place among generations of Arsi Abba Gadaa leaders under Odaa Rooba, one of the five Gadaa Oromo assemblies.

In late 19th century, roughly at the same time as the scramble for Africa, emperor Menelik II set out to forcibly incorporate independent Oromo territories into his “nascent empire.” Having conquered the Wollo, Tulama and other Oromo tribes, Menelik faced a fierce resistance from the Arsi.

The Arsi were not new to their Amhara neighbors to the north. In their encounters in battle, the Arsi did not consider their future nemesis to be much of a contender. The Arsi had, as they still do, much respect, both in war and in peace, for their southern neighbors – particularly the Sidama who are known for their fiercely warrior tradition. Besides, the Amhara did not then know how to ride horses, and the Arsi did not see any reason to be worried about loosing in battle to them. When news came that an invading army was approaching, the Arsi simply asked, “Is this the Sidama?” When told it was not, the Arsi scoffed, lowering their guards.

When Menelik’s army of conquest, equipped with modern firearms acquired from western powers, arrived in early 1880s, the Arsi was in for a rude surprise. However, buoyed by a tradition that bestowed Wayyooma (an almost sacred high honor) accorded to those distinguished in war as in peace, the Arsi waged a valiant war of resistance. The Arsi repeatedly ambushed and kept Menelik’s forces at bay for six years between 1880-86 — winning all 38 running battles. In one instance, in 1885, after Arsi warriors wiped out his elite imperial guard in a nightly ambush at the battle of Doddota near Mount Albasso, Menelik was forced to flee for life, leaving behind his wife and Negarit (the imperial drum). Menelik’s remaining soldiers, awed by the bravery of their opponents, reportedly sung: Doddota ye wandoochu bootaa (Doddota land of the brave).

‎On Sep. 6, 1886, the ferocious Arsi fighters succumbed to Menelik’s state of the art of the arts armaments with their spears and shields outmatched. An armistice was declared after an estimated 12,000 Oromo fighters, who faced off against a superior force led by general Ras Darge, perished in a single day battle. The Arsi “suspended their struggle to save whatever could be saved,” according to Oromo historian Abbas H. Gnamo, author of a recently published book, “Conquest and Resistance in the Ethiopian Empire, 1880-1974 – The Case of the Arsi Oromo.”

But the suspension of open hostility did not end Menelik’s appetite to crush and humiliate the Arsi. In 1887, Menelik’s forces came back to avenge their repeated defeat at the hands of local Oromo fighters and to terrorize the remaining populace into total submission. Ahead of a scheduled Buttaa event, a power transfer ceremony under the Gadaa system, Ras Darge called for a meeting to “make peace” with the Arsi and “deliberate” on future administrative matters. Thousands gathered at Aanolee. Aanolee was strategically chosen because it was a symbolic site of Arsi power and what is reverently referred to as Arsooma, a custom by which the Arsi Oromo made laws, deliberated on war and peace, elected their leaders and settled their inter and intra clan disputes — the super glue that held the Arsi tightly together.

Menelik’s scheme was to divide the Arsi so as to dismantle their Gadaa government structure and communal unity. Along with other Oromo speakers who served the system, the emperor enlisted local elders such as Tuke Mama and Bitee Dilaato. Mama was installed as the interim governor of sort. But the Arsi refused, not least citing the fact that Mama had outlived his Gadaa and was by then a Gadamojji (way past the retirement age under the age-based Gadaa grades).

The debate then centered on “qubaan moo lubaan bulla” — whether to accept Menelik’s rule or maintain their Gadaa structures. The proud Arsi chose the latter. Menelik himself then arrived to deliver the ultimatum that they would be annihilated if they don’t accept his rule. The Arsi was not ready to do so even long after accepting inevitable military defeat. The Arsi insisted on maintaining their Gadaa while accepting, even if begrudgingly, Menelik as a king. “Nugusummaa fudhannee, seeraa keennan bula,” they proclaimed according to local elders.

In what was to go down in Oromo history as Harmaaf Harka Muraa Aannolee, Ras Darge and Menelik’s army ordered those in attendance at the “peace” gathering to enter a narrow pass one by one. “The right hands of all male that entered were cut off on orders of Ras Darge. The Shoans tied the hand they cut to the neck of the victim. In the same manner, the right breasts of the women were also cut and tied to their necks,” according Gnamo. “As a further form of humiliation, fear and terror, the mutilated breasts and hands were tied around the necks of the victims who were then sent back home.”

As a result, all the men and women who went to Aanolee, the estimates ranging from a low of a thousand to thousands more, returned short of their right hands and right breasts.

That was not all. The local Abbaa Gadaas, the highest-ranking Arsi officials, including those in line to take the reign of power, were castrated. Menelik’s soldiers cut the tongues of those who spoke out against Abyssinian invasion. They went door to door collecting cultural artifacts, including Boku, Caaccuu, waraana, wonte, Siinqee and other relics. In a bid meant to destroy and remove Oromo culture from the people’s psyche, the artifacts were torched. It burned for eight straight days, according to descendants of the survivors.

Arsi oral historiography is replete with the story of the tragedy of the cold-blooded massacre at Aanolee. Told and retold by grandmothers and grandfathers for generations since, Aanolee served to this day as a symbol of Oromo resistance against Abyssinian expansion and its continuing legacy of subjugation. The Arsi saga of the 1880s gave birth to two stories — that of Aanolee and Lenjisoo Diigaa. According to Gnamo, Leenjiso was instrumental in organizing the Arsi resistance against Menelik’s invading army.

Among the Arsi, mention the word Aanolee and the blood of the Arsi boils and its trauma curdles into a rock of determination to see to it that justice is restored. Talk about the bravery of Lenjisoo and the knowledge of the massacre of Aanolee becomes a clarion call for spirited action against injustice and the willingness to pay whatever cost is necessary to re-empower the Oromo and relive the glory of its past patriotism and bravery.

Lenjisoo’s bravery was so well known that one of his earliest Geerarsa’s became part of the Arsi folklore. Gnamo writes,

The fall of the Arsi marked a turning point in Abyssinia’s southern conquest. Although Menelik’s imperial army faced furious resistance at Cali Calanqo, in Eastern Oromia, by that time, a vast swath of the Oromo country was already annexed.

The Aanolee memorial was constructed with a cost of 20 million birr, according to the Oroma Culture and Tourism Bureau. The monument stands erect as a reminder of the tragedy about which, in the words of Gnamo, “Ethiopian history was largely silent.” Even today, some right-wing Ethiopianists, akin to holocaust deniers, claim the incident was a fiction. Aanolee stubbornly stands to remind Ethiopia’s rulers, who refuse to deal with mounting Oromo grievances, that the Oromo issue remains an open wound, a latent volcano — with only the day and time of its eruption uncertain.