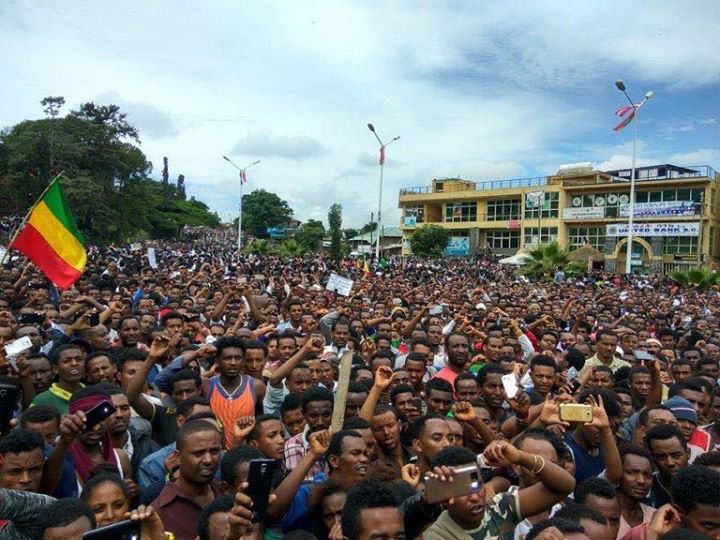 (OPride) — At least 104 people were killed last weekend as anti-government protests flared across Oromia and Amhara regions. Nearly a week after the bloody carnage in which hundreds of thousands protested the Tigrayan domination in Ethiopia, the regime in Addis Ababa remains tight-lipped.

Ethiopia’s bombastic communications minister Getachew Reda has blamed the diaspora and social media activists for hijacking the protests. Addis Ababa also rebuked a plea for an independent investigation into the killings of protesters by the United Nations Commissioner on Human Rights. Reda on Thursday told Al Jazeera English that international observers are not welcome in Ethiopia.

Funerals are taking place across the country. Locals report a heavy military presence in every town in Oromia and all major towns in the Amhara region. Arrests and disappearances have become daily occurrences. Despite the ongoing crackdown, the protests are expected to return to the streets with more vigor.

We asked a well-placed Addis Ababa-based analyst to get an accurate reading on the latest developments on the ground. Here’s an excerpt of that exchange:

In short, Ethiopia is at a dangerous crossroads. We have a regime that will not stop killing and not ready for the kind of dialogue that the volatile situation demands. Besides, the EPRDF regime has become increasingly incoherent and unable to come to an approach that will pull the country away from the cliff.

On the other hand are highly enraged and mobilized populations whose patience and restraint against regime violence is fast running out. This is a deadly combination. Ethiopia’s allies can no longer deceive themselves, as they have in the past, that EPRDF-led Ethiopia is a force for regional stability. A destabilized Ethiopia is a nightmarish scenario with regional and continental repercussions. And the instability within Ethiopia’s ruling party and its intransigence to steer away from violent means of dealing with the gathering storm of society-wide dissent and resentment is driving the country toward chaos.