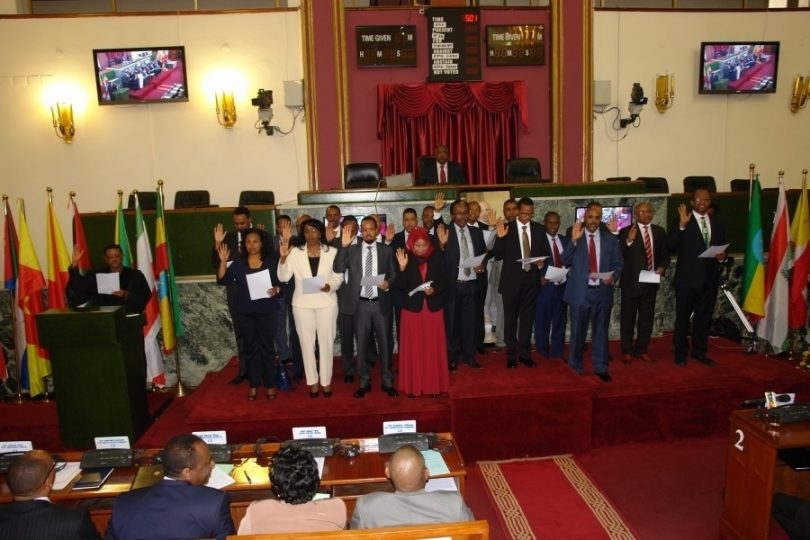 (OPride) — Ethiopia’s Prime Minister Hailemariam Desalegn on Tuesday announced a compelled cabinet reshuffle in an effort to contain sustained and stubborn anti-government protests. The changes follow a swift declaration on Oct. 9 of a state of emergency, which has effectively militarized an already authoritarian state.

In its 25 year-long reign, the ruling Ethiopian People’s Revolutionary Democratic Front (EPRDF) has never made major political concessions in response to public grievances. In that regard, the replacement of key government ministers and Desalegn’s allies is yet another victory for the protesters. (In January authorities grudgingly withdrew the so-called Addis Ababa master plan which served as the immediate trigger for the Oromo protests.)

However, the tone deaf ministerial shuffle, which was unanimously approved by the country’s single-party parliament, sidesteps the protesters political grievances and it will do very little to quell the uprising. The move can be summed up by a popular Ethiopian idiom: Changing the stove does not make the stew any better.

Analysts have pounced on the elevation of two officials from the Oromo People’s Democratic Organization (OPDO), the junior partners in the shaky EPRDF coalition, namely Workineh Gebeyehu Woldekidan, the new minister of Foreign Affairs, and Negeri Lencho Bultum, the minister of Communication. The promotion of two Afaan Oromo speaking loyalists is indeed notable but it will do little to placate the protesters’ demands.

The calls for equitable distribution of power was never about inadequate representation at the very top in a regime controlled by the Tigrayan People’s Liberation Front (TPLF). Instead, it was a demand for an end to the hegemonic domination of ethnic Tigrayans over the country’s politics, security and economy.

The Foreign Ministry is one of the offices controlled by minority Tigrayans since 1991. Workineh’s appointment ostensibly takes that key sticking point away from the opposition. However, the former federal police chief is himself partly of Tigrayan heritage, which only deepens the lack of trust among majority Oromo. Besides, the debate over Workineh’s ethnic background makes little difference. As former three-time minister Juneydi Saddo told OPride recently, for every non-Tigrayan minister,TPLF often appoints a shadowy but powerful deputy that controls the higher official and runs the office from behind.

Negeri, a former journalism professor at Addis Ababa University, is a relative newcomer to politics. In fact, he has in the past disparaged the state-run Ethiopian Broadcasting Corporation, EBC, as a government mouthpiece. However, his recent writings on developmental journalism and a prominent seat on the boards of EBC and its regional affiliate, Oromia Radio and TV Organization, suggests a clear evolution of thought on the role of journalism in society.

One thing is certain: He will be the first Oromo-speaking government mouthpiece to occupy the position. In his first interview with foreign media as a minister, Negeri told AFP, the “new cabinet is ready to respond and provide better service.” His comment toes the official line that the public grievances are informed by poor service provision in the regions.

The protesters’ grievances, particularly in Oromia, are informed by decades of systematic exclusion and marginalization. It also calls for an end to impunity for security forces and a heavy-handed government repression; the release of jailed activists and political leaders; respect for the rule of law; genuine self-rule, and democratic opening. Just as the scrapping of the master plan in January did not end the protests, the latest superficial maneuver won’t end the growing popular discontents.

There is no indication that EPRDF is ready to face the music: Two of the country’s largest ethnic groups – the Oromo and Amhara – have resoundingly rejected the regime. Barely a year after ‘winning’ 100 percent of parliamentary seats both at the federal and regional legislatures, EPRDF now faces an absolute and total legitimacy crisis. The new cabinet replacements indicate its promises of ‘deep reform’ are indeed hollow and predictable.

Mobile internet has been shut down for nearly a month now. This has angered an increasingly connected educated youth. The imposition of a wartime-like state of emergency has brought a temporary lull in protests. But the crackdown and arrests continue out of the glare of media publicity. This ensures the hardening of the protesters demands.

This bodes ill for the country’s future. The martial law is already taking a toll on the country’s economy. Inflation is rising. The military has severely curtailed the flow of goods and the movement of people, including civilians, diplomats, journalists and foreign aid workers. The tourism sector has been hard hit as western governments warn their citizens against non-essential travels to the country.

As we approach the first anniversary of the Oromo protests, which began on November 11, 2015, in Ginci town, the youth are thinking of ways to circumvent restrictions — both online and on the streets — to revive the budding protest movement. More than 1,000 Oromo civilians have been killed and tens of thousands have been arrested since the protests began.

When the protesters do return to the streets, they are unlikely to be swayed by the credentials of out-of-touch government ministers with PhDs or the replacement of a few party loyalists at the top of the pyramid.