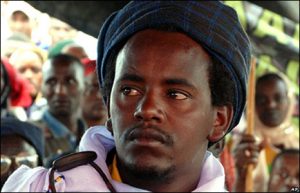 Guyyoo Gobbaa sits surrounded by people shortly after he was crowned the 70th king of the cattle-herding Borena people, Tuesday, Feb. 3, 2009 in Badhaasaa in southern Ethiopia. Guyyoo Gobbaa became the 70th king of the Borena people this Tuesday in a secret ceremony considered so sacred it has the power to kill unauthorized observers. Like his predecessors, he was chosen from birth to serve an eight year term in a system that rotates power between the tribe’s top clans and is as difficult to explain to outsiders as the American electoral college.

BADHAASAA, Ethiopia (AP) — A cattle-herding tribe in southern Ethiopia has crowned a new king in a secret ceremony considered so sacred that the Borena people believe it has the power to kill unauthorized observers.

Guyyoo Gobbaa is spending the three days following his inauguration Tuesday drinking warm beer under an acacia tree and eating goat meat with various elders and government officials, some of whom walked hundreds of miles to his village.

Like his predecessors, Guyyoo was chosen from birth to serve an eight-year term in a system that rotates power between the tribe’s top clans and is as difficult to explain to outsiders as the American electoral college.

“If you see them exchanging power you’ll die,” said Mohammed Nur, a member of the Borena tribe who is also a local government official. “You’ll spit blood. It is totally sacred.”

The Borena king is recognized as an Ethiopian government official and his duties will include mediating in land disputes between tribes.

Traditional rulers exist alongside formal government in many African countries, and their behind-the scenes influence can help or hinder vital national interests.

In the oil-rich Niger Delta, chiefs in top hats and coral beads have sponsored peace talks between rival militant gangs and helped free foreign hostages. In Uganda, the government has legally limited the traditionally independent kingdoms to cultural custodians, but they can use their influence to encourage people to take part in campaigns like the one trying to limit the spread of HIV/AIDS.

Guyyoo, a 36-year-old cattle farmer, has promised to fix his 1 million people’s ailing economy by improving access to livestock markets and patching up relations with other tribes.

Desertification and punishing droughts are gradually pushing Guyyoo’s people to seek pasture for their cattle and camel herds further and further from home, bringing them into conflict with other tribes already settled on those lands.

Guyyoo’s official seal of power is a whip made of rhinoceros and giraffe parts, but he says he does not intend to use it, preferring diplomacy.

“My main aim is to uphold this traditional culture,” he said. “Not only for Borena. For the whole of Ethiopia.”

The Borena say their system, which dates back more than 550 years, relies on co-operation between the clans to ensure peaceful transitions and limits the potential damage caused by a bad king to eight years.

But even as they hail their new king, perhaps the advantages of a different form of governance have not been entirely lost on the Borena.

The 2-month-old son of Mohammed, the government official, is not eligible for the Borena kingship under traditional rules. But little Barack’s father — so named after Mohammed’s wife lost her plea to name the boy Obama — demurred before ruling him out.

“I don’t know,” he said when asked about the future. “Maybe we won’t want the traditional power. Maybe we’ll want the democratic one.”