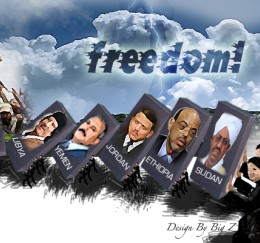 Ethiopia’s handful of TV channels are not carrying much news lately.  Instead, broadcasters are spending most of their time covering every phase of the construction of a new mega dam along the country’s Nile waters.

From mawkish ballads to patriotic poems and documentaries, programmes are waxing eloquently about how far the impoverished African nation has come since the dreaded Communist junta was toppled two decades ago, by defying Egyptian pressure and embarking on a massive project from its own coffers.

The long-standing rivalry with Cairo, fuelled by Ethiopian accusations it was meddling to stop any project along the river, has mustered up nationalistic fervour in the country. Most Ethiopians now say they are fully behind the project and some are even buying government bonds to help fund its construction.

A job well done then, Ethiopia? Not so say the government’s detractors. They say the public mobilisation is just a diversionary tactic, a ploy to distract citizens from the country’s ills. They’ve even set up an online campaign calling for an Arab-style “day of rage” on May 28, the day Prime Minister Meles Zenawi’s rebels captured the capital in 1991.

“There is no reason why we cannot have the Arab uprising in Ethiopia,” says their proclamation, headlined “Beka!” – meaning “enough” in the Amharic language. “We have resolved to bring the torch to Ethiopia, and liberate the country from the minority dictatorship that has been in power for more than 20 years,” says a post on their Facebook page, which has some 3,000 “confirmed” attendants.

Their resentment echoes some of the factors cited by demonstrators in Egypt: high unemployment, surging costs of living, as well as gripes about the government’s democracy and human rights record. It also derives from the country’s ethnic federal model, which they say has damaged national cohesion. Street protests erupted in Ethiopia after Meles’ disputed 2005 election win and more than 200 people lay dead after bloody battles between protesters and police. Some government officials believed then that the opposition was trying to provoke a revolution.

The government hasn’t failed to notice the latest campaign. Party insiders say they have been meeting constantly to discuss such scenarios, while opposition figures said in March that hundreds of their members were rounded up to nip any potential uprising in the bud. The authorities said the people were members of an outlawed “terrorist” group. Addis Ababa also introduced price caps on certain goods to ease the costs of living shortly after protests gathered steam in North Africa. Ethiopia’s inflation rate surged to 29.5 percent in April from just 5.3 percent in August last year.

In sub-Saharan Africa, attempts to organise protests this year in countries such as Djibouti , Gabon and Mauritania have been swiftly snuffed out by the authorities, although protests over food and fuel price rises in Uganda have dragged on for more than a month. The opposition in Eritrea is also trying to muster a protest via Facebook for May 28 as well. But in diverse Ethiopia, it’s hard to speculate how far resentment (or support) is entrenched, and it is likely that political allegiances vary from region to region.

On the other hand, Meles has  received credit for his anti-poverty initiatives, with the number of universities surging 10-fold since 1991, health coverage improving and the construction of an impressive infrastructure network throughout the country.  The economy has also grown at a healthy rate for the past six years – at double-digits in fact, according to government figures. But some experts say Ethiopia’s surging cost of living is Meles’ Achilles’ heel, not the stalled democratisation process.