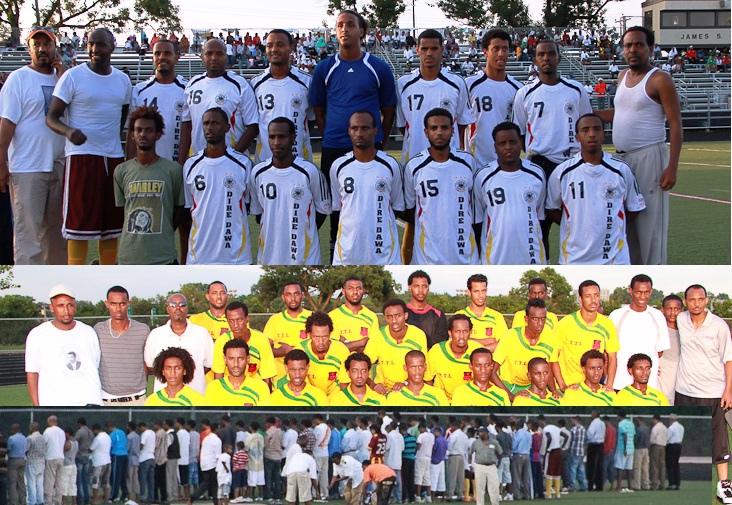 Saint Paul, MN – On Day two of the Oromo soccer tournament, three games were played. The first game between Dire Dawa and Oromo United (OU) was one of the most anticipated games in the division. Natural rivals, the two teams played a sophisticated game. OU won 2-1 leaving the defending champs, Dire, arguably caught in a difficult grouping, unhappy and vulnerable.

In the afternoon, the only “international team” Oromia of Toronto played against Utaa Waayuu. Utaa Waayuu took a comfortable 2-0 win. At the start of the game, I stopped at Oromia’s bench and talked to the team’s longtime coach, Muhamad Sani Hussein. Founder and head coach for Team Oromia since 1996, M/Sani is among the pioneers who founded OSFNA.

Brushing aside the weather as non-issue, M/Sani echoed an oft repeated call for the federation to visit where it all started, Toronto. This is one “issue that preoccupies my mind,” he said. “The federation should give Toronto a chance to host the game once more and give the Oromo youth in Canada a chance to come together and play the game they cherish,” M/Sani said. This has been an issue since the beginning of OSFNA’s era. States that don’t field several teams want the voting system changed to allow places like Toronto a chance to host the tournament.

A lot of Oromo immigrants and youth, who would love to be party in the pilgrimage, miss out on the Oromo event of the year because of border and travel related issues. According to M/Sani, in Canada, Oromo teams emerge and disappear because OSFNA has long ignored or been reluctant to heed their call to give Canadian-Oromos a chance to showcase their talents. Beyond soccer and parties, the event also “brings about cultural awareness…hosting OSFNA’s games in Canada will go a long way to promote Oromo culture and cause in places like Toronto or BC,” he added.

Really, the only major news on the second day of Oromo soccer tournament is still the weather. No one expected a thunderstorm amid a record heat wave. Halfway through the last game of the day between Darara of San Diego and Mada Walabu, the sight of dark cloud was immediately followed by a downpour.

The officials were forced to discontinue the game due to the soccer field blackout caused by the storm. The game was recorded as incomplete for the time even though Mada Walabu had already scored easy four goals. OPride.com later learned, the officials ruled Mada Walabu the winner after consultation with both teams.

Day Three: Magnificent Game and a Controversy That Ensued

Not to beat a familiar drum, the weather was only a little worse than the previous days. The morning games were largely uneventful and turn-out very low. The exception: Oromia 11 Stars scored eight to nothing against Qerensaa of Portland. Both OU Gold and Risaa scored three goals apiece against Finfinne and Bariisa respectively. The Abdi Saba and Burqitu game was scoreless. Generally, the afternoon games were well attended, especially the last game between Dire Dawa and TTL (10,000 Lakes) – both Minnesota teams.

Perhaps the record turn-out thus far, notable Oromo celebrities like Dr. Ali Birraa included, there were at least 1000 energetic supporters rooting for their respective team. The commentator, Utaa Wayuu’s head coach, entertained the cheerful audience by keeping abreast play-by-play. TTL supporters kept it to themselves for the most part of the first half after Dire scored at the 28th minute mark.

The fans came to their feet when Tabor Mamo Wolde of TTL sent the equalizer to the nets. Tabor is the son of legendary long distance Oromo runner, the late Mamo Wolde. T, as his friends call him, was the favorite player of the day and also a target of repeated fouls from Dire. From there on, the game was nerve-wrecking at every ball kick and throw.

I caught up with Tabor at the game’s conclusion and asked him how he felt after scoring the equalizer. He said, “I wanted to give my team a chance. We were down one goal…the score gave me and my teammates a real boost.” He was happy with the result although he won’t play in the next game against OU. Tabor, a recent high school graduate, is surely one player to watch in the years ahead.


TTL is a relatively younger team compared to the five-time champions, Dire Dawa. TTL players are aged as young as sixteen. They forced world-famous Dire players, like Lencho Elemo and Okacha, to perform a little better to prevent their team from going home in round one. Ayano Jiru with his unique hand-ball throwing style was another energizer for TTL players as well as fans.

Seemingly worried Dire coaches did not idle one minute for most of the second half. Dire fans known for their solid support for the team and earsplitting cheers, kept cool and quit. Dire had already lost to a rival and one time break-away OU. A loss to TTL meant packing and going home for the two time defending champs. So they played hard and were hungry for a win.

Dire’s star players, some who played in European junior leagues, came forward and attempted to deliver. The goalie and TTL defenders continued to diligently deflect every shot at the goal. The well fought and exciting game was tied at 1 after 76 minutes. The result stirred a major controversy drawing anger and disappointment from Dire players and coaches who were eager to win.

According to Dr Negash, a veteran Dire player, the middle referee stopped the game seven minutes early. Not only that, while the referee was assessing the condition of a Dire player who was down after apparently being hit, a lineman pulled the middle referee aside and told him to declare the end. “That did not make any sense. The middle referee had his own stoppage time. He could have looked at that, acted on his own authority and made the call. It was supposed to be a common ball. He didn’t even start the play and then stop. The lineman instructing him to stop the game signals some foul-play by the federation or someone from the other team,” Dr Negash said. Dire is expected to play Bilisummaa in coming days but some players could be heard as saying “what’s the point of playing after this.”

I asked the refs for explanation. They insist, the rule says “play for seventy-six minutes and four minutes of water break (two, two minutes apiece).” That is what happened. There was no loss of time and the game was not cut short. The confusion stems from players and coaches assuming we are still on the ninety minute rule.

Despite that minor incident, both teams played exceptionally well showing a hunger to win and a very competitive spirit. There were many good shots and missed opportunities on each side. But those who attended would agree, the game was exciting and worthy of all the sweat and sun burn.

*The reporter, Oromsis Adula, is the founder and editor of OPride.com, a multimedia website that aggregates Oromo and Ethiopian news. Oromsis writes regular news commentaries, reports, and Op-Eds focusing on the Oromo Diaspora. Pictures by OPride.com’s graphic editor, Big Z.