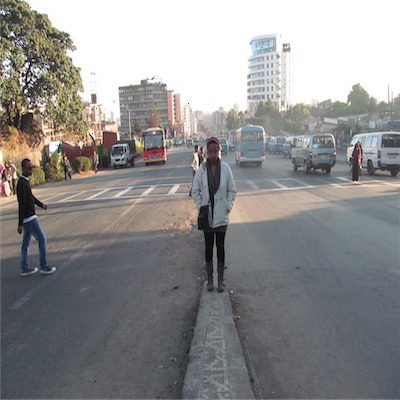 Last week I shared my early general observations of life in Ethiopia and promised to elaborate on a disturbing experience I had in the ER in my next entry. In this second installment, I will walk you through the ER at Black Lion Hospital and share the heartbreaking story of a young girl from Gelemso.  Please be warned that some of the details of her story are very graphic.

My first shift in the ER began with a tour of the facilities.  As I approached the main door, I quickly noticed the overcrowded waiting area and instantly felt weighed down with expectations as about  thirty pairs of eyes watched me walk into the department.  “Here is our triage area,” the chief ER resident said pointing toward a wooden desk with a sign above it that read, “Vital signs are as important as the patient’s life.”  As we moved further into the ER and farther away from the fresh air outside, I was overcome by the smell which was a mixture of bodily excretions, blood, sweat and stagnant air.

There are fourteen beds on the medical side of the ER, ten beds on the trauma side, and anywhere from seven to ten beds in a hallway which serves as a makeshift holding area for admitted patients awaiting beds on the wards.   At the end of a dimly lit back hallway there is a small room with four beds where the most critical patients in the department are monitored.  “Umm, okay…that’s pretty much it,” he said gesturing back toward the front. “Let’s get to work.”

Before even seeing one patient, I felt complete and utter hopelessness.  There were so many truly ill people, so few doctors and forget about the resources.  I couldn’t help but think of the ERs I am used to in the U.S. Trauma bays that convert to ORs, supplies stocked to the brim, MR and CT scanners in the department, O negative blood within reach for emergency transfusions.  “This is going to be a heartbreaking, gut-wrenching experience” I thought.  I already knew I would watch helplessly as patients die from injuries or ailments that are not fatal in better equipped parts of the world.

I put my bag down at the nurses station and pretended to bend down to tie my shoe.  “God, help me be strong.  Use me to help who I can.” I prayed the quickest prayer and stood up to face the day.

As we walked through the holding area hallway, I locked eyes with a young girl on a stretcher.  She was extremely thin, sitting up with her legs bent at the knees and had an IV of normal saline going into her right forearm.  There were two men with her and from the look of their garb I could tell they came from the countryside.  At first glance it just looked like a typical case of malnourishment.  Young child, poor family from the countryside, emaciated features, thinning hair, open and shut case.  In a million years I could never have been prepared for what happened next.

One of the men called us over to her bed complaining, as many patients do, that a doctor hasn’t been by in a while to see her.  She was admitted a few days back and apparently awaiting an orthopedic procedure.  I was confused. Why would she possibly need an orthopedic procedure for treatment of malnourishment?  The man was speaking in a frenzy then quickly got up and lifted the blanket that was covering the girl’s legs.  What we saw was nothing short of horrific.  The skin and soft tissue around the girl’s ankles had completely necrosed (died due to lack of circulation) the whole way down to her bones which were visible with a naked eye.  Her feet were completely dead, black and hanging by the ligaments which connect the leg bones with those of the ankle joint.  Before I could stop myself, I let out a gasp and covered my mouth.

The history from both the girl and her caretakers repeatedly declared no foul play had taken place.  However, as medical professionals, we are trained to look beyond the apparent, acting a lot like detectives to solve a puzzle that only contains half the pieces.  Just as the girl fit the prototype for risk of malnutrition, sadly she also fits another one for victim of abuse.   The pattern of her injury raised concern in all of us that this is unfortunately exactly what happened to her.  Being that her wounds were symmetric, at the same level on the legs and of equal age the most likely cause was that she was bound by her ankles so tightly and for so long that the circulation of blood to her feet was stopped.  Corporal punishment, especially in rural parts of the country is some of the harshest anywhere in the world.

I felt particularly saddened by this case for many obvious reasons but most strongly because this did not have to happen.  This was not an unavoidable accident or illness.  It was, most likely, an unnatural, provoked event.  I remember thinking that if the caretakers had just a little bit of understanding of the morbid consequences, maybe, they would have tied the rope less tightly or removed it sooner.  I know, that’s not a sound solution by any stretch but you have to understand just how desperate I was at that moment.

I will never forget the look in her eyes as we locked gaze with one another from across the room.  This young, beautiful, little girl will now live her life as a double amputee.  She was scheduled for bilateral below the knee amputation which is still pending because before going into surgery, patients must secure their own supplies including blood that will surely be needed for transfusion in such a procedure.

Thank you for reading this post through to the end.  I understand it may leave many of you feeling very disheartened and uneasy.  Please keep this young girl and all victims of abuse in your thoughts and prayers.

In my next blog, I will share with you a very interesting conversation I had with a surgical resident at Black Lion Hospital about the state of the healthcare in Ethiopia. With his permission I will include some of the findings from a thirty page report he wrote for the Ministry of Health about restructuring the system to a more European style of healthcare delivery….with a few curve balls of course.

Until then, take good care of your Self.