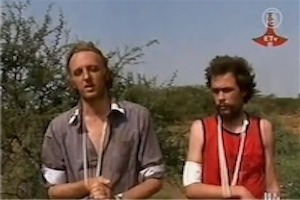 An Ethiopian court has sentenced the two Swedish journalists accused of illegally entering the country and supporting terrorism, to 11 years in prison. Johan Persson and Martin Schibbye were arrested on July 1, 2011 upon entering the Ogaden province of Ethiopia via Somalia.

The journalists’ defense lawyer Abebe Balcha says they would soon decide whether to appeal the decision. “I am not satisfied, as a lawyer for the defendants, I do not agree with the decision,” Abebe said outside the court.

“It’s absurd.” Schibbye’s mother, Karin, says. “You can’t really take in that they are sentenced to 11 years. It’s obviously so wrong.”

According to Sweden’s state secretary of foreign affairs, Frank Belfrage, the Swedish government has asked the European Union and the United States for assistance to “ensure their liberation as soon as possible.” The European Union has also expressed ‘serious concern’ over the outcome of the trial.

“Their sentencing on terrorism-related charges raises concerns about the freedom of media and expression in Ethiopia,” the EU foreign policy Chief, Catherine Ashton, said in a statement. “The EU will continue to closely monitor this case.”

Meanwhile, the sentence has drawn criticism and a massive outcry from other journalists such as Nicholas Kristof and human rights groups calling for the immediate release of the journalists and a reform of Ethiopia’s unlawful anti-terrorism legislation.

Persson and Schibbye had illegally entered Ethiopia’s Ogaden province, an eastern ethnic Somali region, when they were arrested whilst in the company of rebels from the Ogaden National Liberation Front (ONLF). Persson says their intentions of entering the province and working with ONLF rebels was only to investigate the activities of Swedish oil company Lundin Oil and also the allegations of human rights abuses committed daily by Ethiopian troops in the Ogaden region.

The ONLF has been fighting for the independence of the Ogaden region since 1984, saying they have been mistreated and marginalized by the Ethiopian regime for decades. Accounts documented by human rights organizations such as Amnesty international and Human Rights Watch show systematic rape, villages burned to the ground, and war crimes occurring in the Ogaden region.

An area deemed strictly off-limits to the international media and aid organizations by the Ethiopian government, the Ogaden region has increasingly become an interest to foreign oil and gas companies, an interest that the ONLF fears will only result in more conflict and governmental brutality throughout the region.

—
*Dharra Budicha, is a student journalist, human rights activist, and OPride.com correspondent in Canada. Follow her on Twitter.