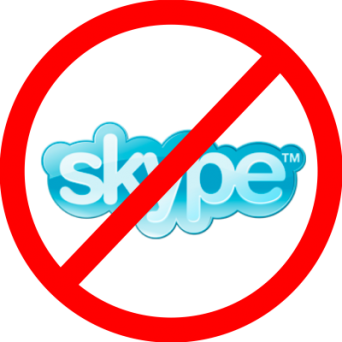 A new Ethiopian law, Telecom Crime Controlling Prevention Proclamation, which was ratified on May 24 but has largely gone unnoticed, criminalizes the use of VoIP (Voice Over Internet Protocol) services such as Skype, Viber, Paltalk, Yahoo Messenger and Google Voice.

According to a copy of the legislation obtained by OPride.com, under the current law, the use of VoIP services carry a two to eight years jail term while provision and use of an Internet phone calling service is punishable by up to 15 years in prison. The new law also gives the Ministry of Communication and Information Technology the ability to supervise and issue licenses to private companies that import communication equipments.

Earlier this month, a media watchdog group Reporters Without Borders said that the country’s only Internet Service Provider, Ethio-Telecom – owned by the government – has began “blocking access to the Tor network, an online tool that allows users to browse anonymously and access blocked websites.” To accomplish selective blocking, Ethio-Telecom has installed “Deep Packet Inspection (DPI), an advanced network filtering method,” also used in countries like China and Iran, the agency said.

Ethiopian authorities say the law was necessary to protect the country’s national security interest, and because VoIP services posed a threat to the state’s monopoly over telephone communications business. VoIP’s enable users to call long-distance at free or reduced rates. “Ethio-Telecom has been losing 83 per cent of its income from its international calling business due to the illegal operations of private service providers,” wrote Argaw Ashine of Africa Review, quoting Ethiopian officials.

Yesterday, Addis Fortune, one of the handful remaining private English language publications in the country, penned an editorial calling the new telecom bill “grossly criminalizing.” The bill “overstretches the concept of national security at the expense of individual liberty, a recent trend in Ethiopian legislative history,” Addis Fortune said.

The Fortune’s editorial, which said the current move to restrict communications in Ethiopia is unconstitutional, added, “sorrowfully, though, 99.8 percent of the parliamentary seats are occupied with the ruling party. This provides it with a sweeping power to legislate its intent, as recent experiences show.”

Ethiopia already blocks diaspora-based opposition blogs and independent websites, like OPride.com. The current legislation is part of the government’s heightened efforts to control other communications, which observers say would soon expand to social media networks. Only less than one percent of Ethiopia’s estimated 90 million people have access to the Internet, of which 511,240 are Facebook users, according to an estimate by the Internet World Stats website.

Amid growing discontent with the government’s heavy-handed repression and a recent wave of anti-government protests by Ethiopian Muslims, the number of social media users have grown in recent weeks. Others are predicting the government will soon move to restrict the use of social media sites. “Now that independent opinion leaders are emerging and fragmentation receding, Meles [will] shut down Facebook. I give it a year and half,” said Abiye Teklemariam, an exiled Ethiopian journalist on Twitter.

Ethiopia is the second leading jailer of journalists in Africa, only after its arch-foe Eritrea, according to Committee to Protect Journalists. The Horn of Africa nation, which also has the largest number of exiled reporters, has been in the news over the last year for charging journalists and opposition leaders under its stringent anti-terror law. One of the journalists, Eskinder Nega, who received the 2012 Pen America’s Freedom to Write annual prize for publishing articles critical of Ethiopia’s human rights record faces a death penalty, if convicted. His verdict is expected on June 21.

A senior democratic U.S. senator on Thursday issued a written statement condemning the assault on freedom of the press in Ethiopia. “By trying to silence those who do not toe the official line, the government is only helping to underscore the concerns that many inside and outside of Ethiopia share about the deterioration of democracy and human rights in that country,” said senator Patrick Leahy.

The high-ranking senator from Vermont underscored Ethiopia’s key role as a U.S. partner in combating “the threat of terrorism in the region, and making gains against the region’s recurring famines and fostering the kind of development that can bring the cycle of poverty and hunger to an end.”

In its fiscal year 2013 budget, the Obama administration requested “$350 million in assistance for Ethiopia.”  But “to the extent that any of that assistance is intended for the Ethiopian government, the importance of respecting freedom of the press cannot be overstated,” senator Leahy’s statement said.  “What happens to Eskinder Nega and other journalists there will resonate loudly not only in Ethiopia, but also in the United States Congress.”

Given its past practices, pundits suggest that the Ethiopian government will likely convict Nega and continue implementing its draconian press law, which has effectively driven the private media out of business. “Having silenced political dissent and the opportunity for the opposition to freely organize, the government will have no incentive to heed Senator Leahy’s calls,” said one Ethiopian observer who asked not to be named.

“The regime knows full well that US security interests would ultimately trump and drown out the rhetoric about press freedom and protection for human rights.”