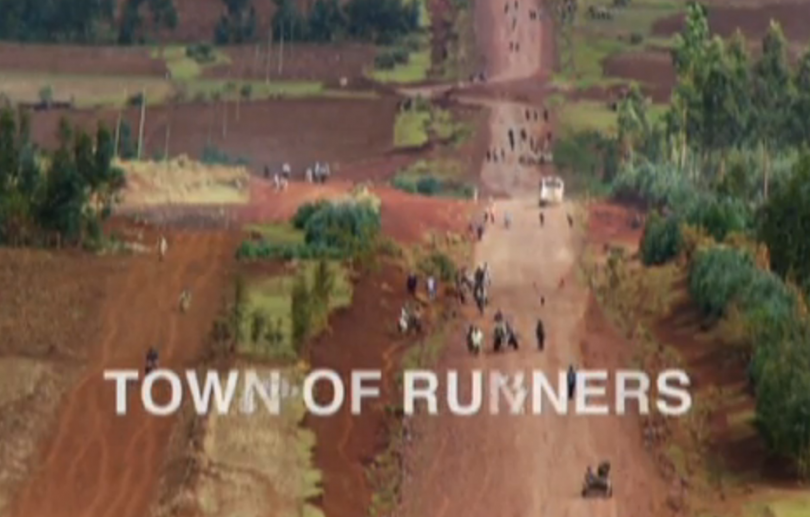 Jerry Rothwell’s new film, Town of Runners, is a masterpiece feature documentary about two young runners from Bokoji (Bekoji), a small town located in central Ethiopia, in the Arsi zone of the Oromia region. Little known to the world, Bokoji is a highland town of about 17,000 residents, which has produced some of the finest long distance athletes, such as Tirunesh Dibaba, Kenenisa Bekele, Fatuma Roba and Derartu Tulu.

According to the filmmakers, at the 2008 Beijing Olympics alone, “runners from Bokoji won all four gold medals in the long distance track.” Encouraged by the success of these pioneer athletes, Bokoji’s youth are now striving to emulate those local heroes on the national and world stage.

The film is a bold portrait of life in Bokoji, where in the words of the 54-year-old former physical education teacher turned coach, Sintayehu Eshetu, “running is a way of life.” Over the years since coming to Bokoji, Eshetu has coached a number of athletes starting with Derartu Tulu – the first African female to win Olympic Gold.

But even when the athletes left town and made millions by running, Eshetu stayed. I’ve a responsibility to produce the next generation of athletes, he tells the filmmakers through an interpreter.

Sadly though, despite giving Ethiopia such exceptional athletes, Bokoji remains neglected. It’s only a year ago that asphalt roads were constructed – by the Chinese. This sparsely populated tiny town lacks basic services such as the telephone. If Ethiopia is on the move, as economists suggest, Bokoji seems to clearly have been left behind.

The seasonal weather further complicates the puzzle. For Eshetu, maintaining the only running track in town, the Bokoji stadium, is one of his more arduous tasks. Each year when the dry season arrives, the young hopeful runners clear the field of grass, digging by hand. Before they finish making their way around the field, the grass begins to grow again on the other side where they began. Halfway through the film, in a muted recognition of Ethiopia’s lack of progress, one of the group sighs, adding, “Oh! Ethiopia.” Others laugh, as if in agreement, digging up the grass from the running tracks.

Despite the talk of economic development, which is largely uneven, life for Ethiopia’s poor is still marked by many struggles. “It’s difficult to face life challenges and fight to become an athlete at the same time,” Eshetu remarks toward the end of the film. Most of the youth in Bokoji, as well as the rest of the country, have limited options. For many of the girls in rural Ethiopia, including Bokoji, as Workiye Gudata puts it, their destiny hinges on “education and running.” Absent the two, many marry at a young age and turn to farming following in their mothers’ footsteps. “There is nothing else to choose from,” Gudata adds with a bemused expression.

Biruk Fikadu, the film’s narrator, for instance, did not receive enough points on his national exit exam to attain his dream of becoming a doctor. Unable to manage the business, his family had rented the boutique where he once worked and observed this town that runs – for life. But the resilient townsfolk seem to have grasped what Eshetu tells his athletes: “life on earth is a struggle.”

Seen in that light, by exploring the “significance of running for them and the obstacles they face,” the film promises to show “a portrait of African youth seen not through the standard lens of poverty and famine, but one of ambition and hope.”

Town of Runners, now being screened in the UK, is captivating from beginning to end not only because of its portrayal of Bokoji but also for its discrete insights into Ethiopia’s evolving economic and political landscape.

It’s quite alarming to see Hawii Magarsa and Alemi Tsegaye – the film’s two main characters – as well as their parents struggle to express themselves in Amharic, the official language of Ethiopia. The Oromo language, which they often deferred to throughout the film, would have been a natural choice. After all, the Oromia regional government prides itself on winning those freedoms for the Oromo. This could simply be because the filmmakers chose a non-Oromo speaking fixer but even at the regional level competitions, despite the chatter about linguistic and cultural rights, a lot remains the same.

After opening the athletics clubs with ballroom speeches and much fanfare in Addis Ababa, the regional athletics federation had failed to provide the necessary accommodation for these promising young athletes. When Hawii was sent to the Woliso athletics club, some 280 kilometers away from Bokoji, she was only given a mattress, and at times denied food. Life became so unbearable that at one point in the film she tells her friends, “this is like living in a grave.”

It is also worth noting here that the town of Bokoji, given its history and higher altitude, would have been an ideal choice for opening an athletic club. Indeed, generations of accomplished Ethiopian athletes were trained on those hills. But the regional government, which the film claims have setup 18 athletic clubs around the country, has decidedly chosen far-off places like Holota and Woliso, essentially denying the youth in Bokoji a decent shot at trying their luck with running. By moving away, children like Hawii would have to forgo or at least postpone their schooling for a shot at becoming a professional athlete. The separation from families, the first time for many of these young athletes, as can be seen from Alemi and Hawii’s experience, takes a huge toll on their competitive spirit.


However, it is not all gloom and doom; it was equally compelling to see how different ethnic identities were displayed at the national level during the federal youth athletics competition in Addis Ababa. The youth from Oromia chanted and sang in Afaan Oromo while others cheered and ululated in Amharic. Even if subtle, such cultural identifications offer a glimpse of the changing political landscape in Ethiopia, perhaps, if allowed to continue, for the better.

Whether or not Bokoji is caught between modernity, urbanization, and tradition, as the film suggests, is unclear. But the Town of Runners, a story of Hawii and Alemi’s determination to reach higher despite all the odds stacked against them – is an absolute joy to watch.

Of course, not everyone here is running for the money, as Alemi says; some do it because they love to run. For better or for worse, in Bokoji, running is a culture as much as it’s a sport. Or, as in Hawii’s case, running is life.

More clips and information about the film can be found here: