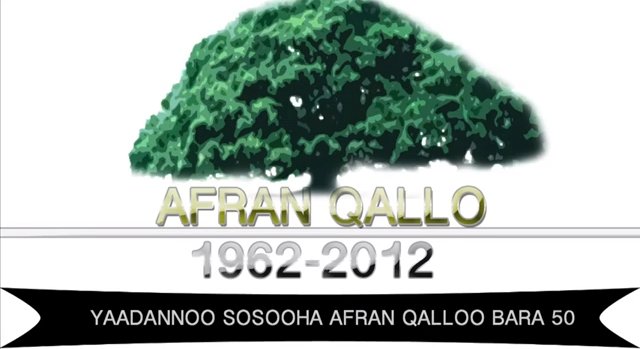 On Jun. 30, 2012, the opening night of the annual Oromo convention , slated to run from Jun. 30 to Jul. 7, in Toronto, Canada, the Afran Qallo band will mark its golden jubilee – the 50th year anniversary of the birth of a movement that produced such star talents as Dr. Ali Birra, the undisputed king of Oromo music.

In 1962, when it was still illegal to sing in the Oromo language, one of the most widely spoken languages in all of Africa, a small group of activists risked persecution by forming the first-ever Oromo music band, in Dire Dawa, a bustling city in eastern Oromia, Ethiopia.

Afran Qallo, whose historical name derives from the collective reference to four of Qallo’s sons – Alaa, Babile, Daga and Oborra – soon struck the chord with locals when the troupe began performing cultural songs at weddings and holidays, often hidden from the watchful eyes of government officials.

At the time, in the city of Dire Dawa, the Somalis, Amharas and Hararis had their own music bands – but the Oromo did not. “Whenever there was a need for wedding celebration, Oromo families had to either pay for the Somali or Harari musical bands because generally, in those days, the Amhara bands did not deal well with the Oromo and did not have any respect for our people,” said Dr. Mohamed Hassan, a professor of history at Georgia State University. “It was the absence of any cultural space for the Oromo which inspired Oromo individuals to form an organization and create a musical space for themselves.”

What happened next, no one — not even the founders — expected. “For the first time, there was this general feeling that Oromo music was as good as anyone’s music,” said Dr. Hassan. “It created a tide of anger against the Ethiopian government because the Oromo realized they were denied the opportunity to enjoy their own music.”

The 1960s was a tumultuous decade in Ethiopia. The Ethiopian students’ call for land reform, mainly coming from then Haile Silassie I University, was reverberating, and the dispossessed peasantry – who were condemned to a life of serfdom by absentee feudal landlords – were beginning to take notice of their plight, which was dismal. The Oromo, Ethiopia’s largest ethnic group, was getting organized in various forms in different parts of the country.

In the center of the country, formed in 1963, the Macha Tulama self-help association, whose main aim at the time was educational empowerment and infrastructural development, was gathering momentum. In the southeast, the Bale people’s revolt, under the chairmanship of General Waqo Gutu, was threatening to take back a vast swath of land from the regional nobility that was taking away their pristine land in the name of the crown and levying heavy taxes on the peasantry.

Individuals like Shaykh Bakri Saphalo, a prominent scholar who invented an Oromo language writing system, were creating a stir by writing poems aimed at awakening the Oromo. “By producing powerful poems, that demonstrated the richness and beauty of the Oromo language, he set in motion a generation of famous poets and singers,” Dr. Hassan wrote in the Journal of Oromo Studies. “Shaykh Bakrii’s ideas, his poems, his teaching and cultural nationalism dominated the thinking of Oromo elite in Hararghe, especially in urban areas such as Dire Dawa.”

As such, the formation of Afran Qallo in Eastern Oromia was a watershed moment — a welcome addition to the Oromo movement. Soon, leaders of Afran Qallo musical band established links with the Macha Tulama association and other Oromos to unify its opposition against Haile Silassie’s imperial rule.

There was also the Oromo radio program broadcast into Ethiopia from Mogadishu, Somalia’s capital, by famed Oromo journalist Ayub Abubakar. “The radio program was so effective in mobilizing public opinion against Emperor Haile Selassie, that the regime sent a secret agent to Mogadishu and murdered Ayub Abubakar in 1966,” Hassan said. Abubakar, who himself was one of the founding members of Afran Qallo, was one of Shaykh Barkri’s protege.

In its heyday, the Afran Qallo cultural group did not limit itself to singing and music production. “We started doing theatre, making a mockery of the government’s mistreatment of the Oromo,” said Mr. Adam, 72, who has written a forthcoming book about the history of the group. When officials threatened to shut them down, Oromo elders asked the band “to sing songs of praise for the king,” according to Mr. Adam. They buckled under pressure and produced a song called, “Mooti biyya teenya yaa Haile Silassie, si garaan Xaliyaanin dheefa dhuke kaase” – loosely translated, oh! Haile Silassie, the king of our country, Italians ran for their life when they saw you coming. The song is an inference to the emperor’s return from his brief exile, after Italy invaded Ethiopia, and the Italians defeat in 1941.

But as the group gained unprecedented momentum among the Oromo, pressure from regional bureaucrats continued, Mr. Adam recalled. Members of the band, including Mr. Adam, were even detained and interrogated to name civilian leaders of the band who were supplying them with modern musical instruments.

Amid continued harassment from local lords, who accused the group of narrow nationalism and separatism, and a subsequent injunction against its members, the Afran Qallo band eventually fell apart around 1965, according to Mr. Adam. But by then, he says, some of its star artists had found a voice, and more importantly, a calling to contribute to the Oromo peoples struggle for freedom.

“Before the government started harassing them, the band traveled to places like Haromaya, Awaday, Dadar, Qobo, Hirna, Ciro, and several places in Hararghe providing the necessary cultural service that the community needed at weddings, cultural events, holidays and so on,” said Dr. Hassan.

Unable to continue working in the country, some including Abubaker Musa and Yonis Abdullahi left for Somalia where they continued writing and producing songs. “Ali Birra, Ali Shabbo, Usmail Mummad, Mohammed Yusuf, Salah Mohamud, Shantam Shubisa and others kept marching forward…using their penetrating melody and captivating lyrics to reunify the disjointed Oromo regions to rise up in unison against national subjugation,” the jubilee organizing committee said in a statement on Jun. 22.

The birth of the Afran Qallo cultural troupe is also said to have inspired other Oromo performers in different parts of the Oromo country. Zarihun Wadajo, one of the earliest Oromo vocalists, who was born in Western Oromia, sang his timeless song, “Koottaa Aramaa Aramnaa,” at the age of fifteen in 1977, according to Shawn Mollenhauer, who recently completed his PhD thesis at the University of California-Riverside on Oromo music. “Zarihun was immediately placed in prison for eight months for his song,” wrote Mollenhauer.

The Jun. 30th all-day commemoration is being billed as a once in a lifetime event. “During the day, a panel of experts and scholars will review and reflect on the role of Afran Qalloo in Oromo political history and Oromo language,” said Badri Abdo, chairman of the organizing committee.

“The discussion will be followed by a memorial service for those who sacrificed their lives and a ceremony honoring those who are still alive.”