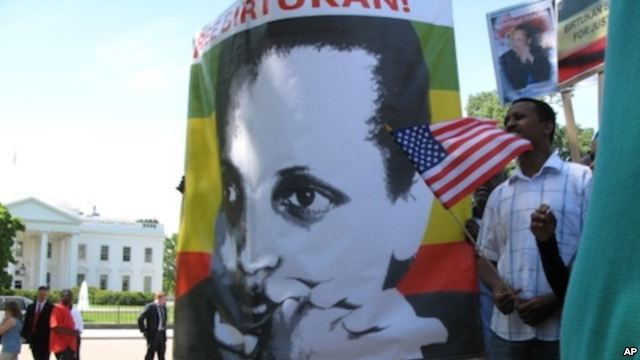 From Syria to China, Ethiopia to Sudan and anywhere in between, the life of opposition activists fighting against oppressive establishments is marked by constant peril and uncertainty–with varying degrees of severity.

This observation can be explained simply by the fact that the fates of these two are often seen as mutually exclusive. One must ‘die’ for the other to ‘live.’ The opposition’s triumph usually ushers in some sort of regime change. Inversely, the endurance of an incumbent could spell doom and the end of political activism.

This phenomenon is evident in the one-party-dominated Ethiopia. The government’s record in crushing peaceful popular dissent by force, the latest being the police and protesters of Ethiopia’s Muslim community, and the tightening of media environment, illustrate these points. What are some of the factors causing this phenomenon, and what are the implications?

One factor is the autocratic nature of the current Ethiopian government. Ethiopia’s ruling elite, the Tigrean People’s Liberation Front (TPLF), never lacked disgruntled opposition groups sounding the trumpet of activism. In its two-decade old rule, the TPLF has failed to address the popular grievances of the people of Ethiopia. Instead, it has opted to sing songs of Ethiopian unity under an ostentatious umbrella of prosperity, equity, and federalism.

This misleading image of Ethiopia has been ingrained into the minds of international observers to marvelous effect thanks in large part toits media-savvy Prime Minister, Meles Zenawi. The now ailing premier has courted the international community and rubbed shoulders with leaders of the developed world at such illustrious gatherings as the G-20 meetings and the World Economic Forum. To the world, not withstanding the heart-wrenching stories of oppression, suffering and misery of average Ethiopians, Zenawi has portrayed the country as a model success story for its exceptional economic growth and a powerhouse in East Africa.

Reports of thousands of political prisoners held in secret detention facilities across the country, contradict this pristine image. According to memos leaked by the anti-government Ethiopian Satellite Television (ESAT), there are “over 400 political prisoners” in the Kaliti and Kilto prisons alone.

After the botched parliamentary elections of 2010, where the ruling party won all but one of the 547 seats in parliament, the government has been upping the ante. In a damning report titled, Ethiopia: Dismantling Dissent, Amnesty International reported, “at least 108 opposition party members and six journalists have been arrested for alleged involvement with various, proscribed terrorist groups” from March to November of last year.

In an attempt to avoid international mire and scrutiny, the Ethiopia government has shrewdly rolled out a new bill called the Anti-Terrorism Proclamation. This piece of legislation provides law enforcement legal justification to round up opposition leaders, activists and journalists on charges of terrorism, treason and attempts to undermine the constitution. Those detained under these pretexts, often for long, extended periods of time, are condemned to life and, even, death sentences.

Members of the registered Oromo opposition parties, natural targets, have fallen prey to these draconian laws. In August 2011, Bekele Gerba, deputy chairman of Oromo Federalist Democratic Movement, Olbana Lelisa, a spokesman for the Oromo People’s Congress and seven other opposition party members were arrested on charges of involvement with the Oromo Liberation Front.

The detainees joined a long list of political prisoners in that country – Oromo and others – the most notable being Birtukan Mideksa, then leader of Unity for Democracy and Justice, and Amnesty International’s prisoner of conscience. It was only amid an outpouring of international outcry that Mideksa was released; she now resides in the U.S.

Accounts of torture and abuse in Ethiopian prisoners are ubiquitous, yet seldom reported by international media outlets. In a region that is battered by endless conflicts, Zenawi offers a sense of security, a false and pretentious one even for a casual observer. Given its strategic location, the country also enjoys minimal international scrutiny, and has acted with egregious impunity.

This was all before the Arab Spring.

The wave of pro-democracy movements dubbed The Arab Spring is arguably one of the most influential events of the current decade. Once invincible and long-serving stalwarts were toppled. As a result, the Middle Eastern and North Africa (MENA) region is undergoing an unprecedented wave of transformation. Though tepid in the beginning, the winds of change have been blowing and have brewed into a fearsome storm that caught the likes of Egypt’s Mubarak and Libya’s Gaddafi off-guard.

Activists around the world are emulating the Arab Spring model of peaceful protests, mostly the stifled Middle Eastern youth. Many are now hinting that this phenomenon could change direction and head southwards. Sudan is now in the beginning stages of its own revolution (see #SudanRevolts); Eritrea and Ethiopia (#EthioMuslims) are, in effect, bracing themselves for a similar storm. The climate of oppression in Ethiopia created the perfect breeding ground for activism; the Arab Spring was the needed spark to spur things into action.

This has the ruling party cadresextremely worried about their future in the political sphere of Ethiopia. The recent conviction of 24 journalists and opposition members and the banning of Internet calling services offer early signs of the regime’s desperate attempts to silence popular dissent. By making the provision and use of Skype and other VoIP services illegal, the government has proven its determination to cut all lines of communication between vocal diaspora-based opposition groups and domestic political activists.

Panicked, furthermore, by the sudden mass protests by Muslims in Ethiopia, the TPLF-dominated establishment has been acting morelike a cat at a corner with fewer cards left to deal.

Fueling more speculation of uncertainty in Ethiopia is the prolonged absence, from public scene, of Meles Zenawi — leading many to believe he’s gravely ill or even dead. The potential result of all of this is far-reaching, and it involves succession to the most coveted prize – rule over Ethiopia and an opportunity to chart the course of its future.

This fact should not be lost on the Ethiopian people – most importantly, on the Oromo, the main stakeholders in Ethiopia. Despite the uneven-handed oppression, the Oromo stand to gain the most if they actively participate in this and any future revolutionary movements. But by remaining on the sidelines, they stand to forfeit yet another opportune moment to lead in Ethiopia, and guarantee the right to freedom and equitable representation for all.

Wherever oppression exists, the struggle against it will continue; no system or government is too great to be challenged or too mighty to be toppled – not even the Goliath.

* Correction: in the original article posted here on July 27, 2012, paragraph 7 erroneously stated Ethiopia: Dismantling Dissent was authored by Human Rights Watch. It’s now corrected to say Amnesty International.
––
*Mukhtar is an OPride Intern based in the Horn of Africa. He writes a regular current affairs column on the plight of Oromo refugees, and other Oromo-related events in Ethiopia and the Horn of Africa. He can be reached at  moomeqamar@gmail.com.