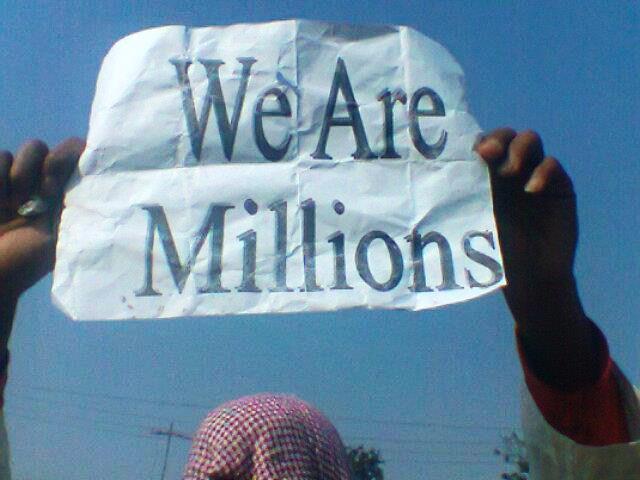 (OPride) — After eight months of staging sporadic protests in the capital, Addis Ababa, on Sunday, the Ethiopian Muslim protesters stepped the ante, hitting a crescendo. As hundreds of thousands flocked to Addis Ababa Stadium to celebrate the end of Ramadan, massive protests were reported across the country.

The Eid day protests catapulted the movement into a new and uncharted territory. “Sunday’s Eid prayer proved to be a day of reckoning,” wrote Dimsachen Yisema, the protesters de facto spokesperson, hinting at the specter of the Arab Spring that toppled several undemocratic regimes. “All [the protesters] share the grievances caused by the government’s unconstitutional interference in their religious affairs, and to demand their voices to be heard.”

Large numbers of enthusiastic protesters turned out in Jimma, Dessie, Robe and Adama towns’ chanting, “let our voices be heard, free our representatives” and calling out the state-run Ethiopian television for its smear campaigns.

Despite the government’s efforts to cast the movement as a work of fringe elements, the unity of the Muslim community was in full display. The organization was unprecedented and the discipline impeccable.

The protests began last January after Ethiopia launched Al-Ahbash, an unknown sect from Lebanon, to forestall the rising tide of an increasingly assertive political activism by the country’s Muslim population. Instead, the government’s maneuvers to depoliticize them gave rise to a potent and yet committedly nonviolent movement, the first-ever by that country’s restive Muslim community.

After initially dismissing the protests as a small nuisance that would soon evaporate like an autumn cloud, the government then tried a succession of strategies to stamp out dissent. Unable to sniff out the protests in the bud, it sent a coterie of officials to woo the populace away from enterprising youth leaders and encourage the public to embrace the new supposedly apolitical sect. However, the number of the protesters kept on growing.

Hoping to squash the protests with false promises, a method it had skillfully used to a deadly effect to undermine, undercut, and bottle up many otherwise promising opposition movements, the regime then heeded calls for negotiations. The protest leaders however gave no ground and rather held the government’s negotiators to the fire by insisting on the implementation of any understandings from the bargaining table before letting up on their pressure. The government then initiated a relentless effort to cast the Muslim leaders as out of touch and self-appointed extremist bunch intent on “destabilizing and disrupting the country form its developmental path.” The negotiation failed to stave off the tension. Meanwhile, the number of the protesters kept growing from month-to-month.

In a further change of tactics, last month the government escalated the differences by imprisoning protest leaders. At the same time, the state media unleashed a coordinated misinformation campaign to place a wedge between the leaders and the larger community. The authorities threatened to detain anyone who underestimated the resolve of the government to stir for protests. The design was to deny the protesters leadership. The number of the protesters however kept growing, even more vociferously.

As the political temperature rose, we asked OPride’s own resident political analyst, Buri Waddesso, to explore what these developments meant and its implications. Accordingly, he penned the following analysis based on the writings of Brazilian thinker, Paulo Friere, who delineated the five distinct stages of revolutionary consciousness.

Reviewing the materials publicly available, one can surmise that the Muslim protesters in Ethiopia have visibly passed Paulo Friere’s first level of Intransitive Consciousness. They are no more silent about their situation. They are able to put a name on the reality of their oppression. They have also gone past the stage of blaming themselves or supernatural forces for their problems. They are not saying this is a curse of providence.

The expansion of protests outside of the capital shows that the activists have also surpassed the level of Magical Consciousness where individuals are paralyzed by self-depreciation and dependence on the power elite. They are demanding their rights, rather than begging for them from a benevolent and paternal power. The recent developments indicate that the protesters have now reached the third stage of Freirean Philosophy called naïve consciousness.

At the time when he penned this commentary, on March 17, 2012, Waddesso was however circumspect in his diagnosis of where the movement was headed.

While they were able to experience and name their reality, the protesters, judging by past experience, could still be subject to intimidation and the promise of concessions. Nothing much could be said about the leadership for there are few statements to go by and track records to evolution. Judging by the limited public statements, the top leadership however seems to be at this stage. One indication of this deficiency is that they still count on the goodwill of the power elite to address their grievances. Their behaviors in the coming weeks and months will tell us if they have reached critical consciousness, the highest stage of – according to Friere, characterized by self-confidence in discussion, receptiveness to consider new alternatives, refusal to shirk responsibility, and a strong belief that one knows that one can not only make history but also act with courage to make it a reality.

The rank and file does clearly seem to be close to this stage, even if not quite there yet. It is not clear if the leadership shares these sentiments and if the latter is a match to the challenges ahead. My reading at this point is that they still lack the depth of interpretation reminiscent of the traits of critical consciousness.  The quality of the discourse has also the markings of sounding dialogical but still not fully so.

The regime can still ride the storm by attempting to cast the movement as an extremist and sectarian group with sinister agenda, pit it against other sectors, and come out as an arbiter. My conclusion is that this is by far the most serious threat to the regime since 2006. But at this point it does lack the depth of interpretation and reflection, not to mention the revolutionary fervor, which can turn it into a potent catalyst for the transformation of the larger society, similar to the Muslim demonstration that preceded the revolution of 1974.

Six months later, the movement has all the markings of Friere’s advanced stage, critical consciousness. It has surpassed all expectations and the movement’s leaders, those in prison as well as outside, have proven themselves to be adept at not only galvanizing the grievances of their marginalized community into a coherent political force but also reaching out to the rest of society. They did the latter so marvelously shaming their political counterparts. Their resilience proved all those who claimed that this regime was impervious to civilian pressure through a nonviolent means and those who underestimated the movement by prophesying that it would be fizzling out under the weight of TPLF’s arsenal of machinations wrong. What is even more remarkable is their masterful utilization of an army of peaceful, disciplined, and determined protesters.

The protests have now clearly entered a new phase, qualitatively different from all previous ones: City after city and town after town, Muslims from all walks of life rose up in unison thereby dispelling the government’s pretensions that the protests were the work of a few trouble makers. What is qualitatively new is the fact that the movement now has a name–creatively dubbed, Dimtsachin Yisema , Amharic for Let Our Voices be Heard. Various reports also show that even those who, until recently, held rival demonstrations at the urging of the ruling party, changed sides and joined the throngs of protesters opposing the government’s interference in religious affairs.

The TPLF-dominated ruling party is very adept at overcoming challenges. That is until now. This time around, the number and quality of the challenges are qualitatively different from all previous ones. In the past, using elaborate divide and rule schemes, the regime was able to form a wedge between its opponents and the larger population. Besides, it also had the unique fortune of facing enemies that saw more differences among themselves than with the ruling party. As a result, they confronted the ruling party singly, one after another. Now, the fortunes seem to have run out. The crises are numerous. The enemies are uniting rather than scratching at each other’s throat.

With the spate of illnesses that afflicted the government’s senior leadership and the resulting succession crises, the mounting protests and uncertainty the two combined to project, the question is no longer whether we are in a post-Meles era but rather whether we are on the very gates of a post-TPLF rule.

The challenge now is for the country’s mutlistriped elite formations to come up with broad-based secular alternatives. Any contender to power in a future Ethiopia, even if begrudgingly, would have to reckon with this new force, which has earned its place on a discussion about the future of the country. It is a stark reminder to anyone who aspires to rule Ethiopia while denying religious freedom and paying lip service to the diversity of its population, both ethnic and religious, and their grievances, not to mention their divergent aspirations that need to be acknowledged, harmonized, and transcended.

To be sure, we are not talking about an imminent regime meltdown. It is still firmly in control of the repressive machineries of the state, which are humongous, the largest in Sub-saharan Africa. However, every passing day, the values of these assets see a steep depreciation. Time is hardly in its favor and decidedly against it. But now it’s difficult to deny that the protests have indeed reached a point of no return.