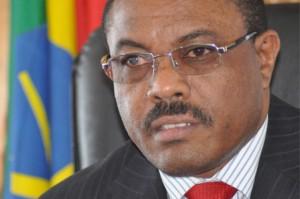 Following the death of Ethiopia’s longest serving PM, Meles Zenawi, Ethiopia named little known former deputy PM as his successor. It’s widely believed that the appointment of a non-Tigrean, and one who was not part of the armed rebellion, is “a figurehead stopgap” decision to allow Zenawi’s former comrades in arms to find a successor by next “election.”

The Ethiopian constitution is dead silent or vague on the issue of succession.  We asked a legal expert to analyze what’s laid out in the horn of Africa country’s constitution. The expert’s response follows:

Strictly speaking the Ethiopian authorities did not act in accordance with the letter and spirit of the constitution when they named Desalegn as a prime minster following their announcement of the late premier’s death.

The role of the  Deputy PM is provided in Article 75. Only two functions are enumerated. One to do with responsibilities entrusted to him by the PM; the other  to act on behalf of the PM in his absence. The Council of Ministers appointed Dessalegn to replace Meles using the second function. But Article 75 is not a succession provision. It does not provide a clear path to succession.

Besides, Meles is not “absent” as the term is legally understood. If you die you are not absent, you are dead, and no one can act on your behalf. There are legal situations where dead people could have representatives–to manage their estates, retire their debts, and the like. But not political power.

Thus, if the Ethiopian constitution is strictly followed, Dessalegn could not be made prime minister using Article 75.

It should also be mentioned here that the deputy is responsible to the PM, and therefore, when the PM dies, let alone act on his behalf, he does not even have legal existence, his standing being the handiwork of only a living PM. His position died with the demise of his creator, Zenawi.

The authorities could be excused if they justified their decision on the need to avoid a leadership vacuum, which would be a serious crisis. The PM post could not be left vacant, even if the constitution is silent. Just because the constitution was badly drafted or because they failed to pass another law thereafter, they cannot put the country in jeopardy, in their thinking. And one could understand their rationale, even if a flawed one, if Desalegn was to act as PM until the council of peoples representatives (parliament) meets.

But the problem is that they did not name Desalegn as an interim PM, a stand-in for the deceased until the parliament is convened, and duly elects a new PM. Not only did they name him PM but also chose him to finish the remainder of Zenawi’s term, three years. That is a clear and egregious violation of the specific provision of the constitution. Article 73 specifically states that the PM shall be elected by the parliament from among its members. Thus, it’s only the parliament that could elect a PM, after the majority party forwarded its nominee.

The government spokesman, Bereket Simon’s statement following Zenawi’s death that said, parliament will be convened only for a swearing-in ceremony was a bizarre one.  It is not clear why the authorities did not play their usual drama and made the parliament meet and ceremoniously elect Desalegn for the remaining term. It could have been easy. Despite claims to the contrary, it does not seem that Bereket got any legal council and seems to have acted unilaterally, committing this grave constitutional error.

The authorities may come to regret making this statement. Even if the parliament convenes and votes to elect Dessalegn as the new Prime Minister, who would believe their claim of constitutionality? Bereket had already said that Desalegn would be PM for the remaining term–with or without vote of parliament.

The legal analysis makes clear that in post-Meles Ethiopia, just as the one which preceeded it, the word of the authorities takes supremacy to the lofty words of the constitution. The latter is just a pretense. What is even more shocking is that the authorities also made a political error: They did not even bother to convene the Council of the ruling party, the EPRDF Council, to formally elect and name the person who would lead the government.

With the parliament sidelined from exercising a role expressly accorded to it by the constitution, and the council of the party denied of its prerogatives, even in a symbolic sense, one wonders, who really runs the country? Is there some extra-constitutional dark force that pulls the strings from behind a shadow? If so, who is it accountable to?

The murky nature of the succession process and the secrecy surrounding the whole matter conspires to make a perfect recipe for a protracted power struggle. According to OPride’s legal expert, following the constitution, even if it is a flawed piece of law, would have been preferable to following none.  At the same time, to talk of a constitutional crisis is to assume that Ethiopia is a country ruled by a constitution in the first place and to accord the constitution a force it had only on paper and lacked in reality. Hence, the announcement of Hailemariam as a Prime Minister robbed the ruling party its constitutional veneer.

Even if the constitutional hurdle is overcome, there is uncertainty as to how much power the new PM would wield and who is the real power behind the throne. Report of the formation of a crisis team from whom the PM would recieve instructions has added to the urgency of the question.

Since the authorities gave up on Zenawi’s possible recovery, sometime between late July and early August, an inner circle of the ruling party’s top brass had been meeting secretly to manage the transition. According to reliable internal reports, there were heated debates, especially on who should replace the fallen leader, debates that have subsided but not entirely dead. The authorities were forced to settle on Desalegn as a choice of last resort merely to allay building pressure on the reality and perception of total Tigrean domination with much misgiving.

The source indicated that, the crisis team included:

The source further indicated that four out of the seven on the team are veteran leaders of the Tigrean Liberation Front, ensuring the continuing domination of the country by a tiny minority. The source added, “the team is so Tigrean-heavy that all but one of them speak Tigrignya fluently.” Desalegn being the only one who would be left out in such a case.

Born in the city of Gondar, in the heart of the Amhara region, Simon is of a Tigrean parentage on both sides. Moreover, the two non-Tigreans on the team are not opposed to continued Tigrean rule, openly stating that “EPRDF’s development road has delivered both democracy and rapid economic growth that continues to benefit the country’s diverse peoples,” the source added.

Initially, it was rumored that each of the EPRDF partner parties would be equally represented in the crisis team. However, neither was the representation equal nor were they formally asked who was to represent them; they were not even consulted about the formation of the leading group.

According OPride sources, there are still lingering concerns about Desalegn. Many in the EPRDF hierarchy are unhappy about the setup, some are planning to challenge it at every opportunity. The source indicated that the US is strongly involved in behind the scene negotiations to ensure the continuation of the status quo.

As to future directions by the presumptive PM and the crisis team, our source noted that the group is in total denial about the grave challenges ahead and the crisis facing the country. They have no inclination to revisit, review, and revise the party’s two-decade old modus operandi. Simon had reiterated that there will be no change of policy, Zenawi’s policies would continue unaltered.

Instead of thinking about the future of the country and making a break with the past, the group is busy organizing a North Korea-style grand public spectacle to lionize its fallen leader. In addition to giving some time for the arrival of foreign dignitaries, that is why the government extended the burial date by a week. The ruling party’s cadres aggressively working to mobilize the public, especially the countryside, with all kinds of bribes, cajoling, and threats to come out in large numbers to mourn Zenawi.