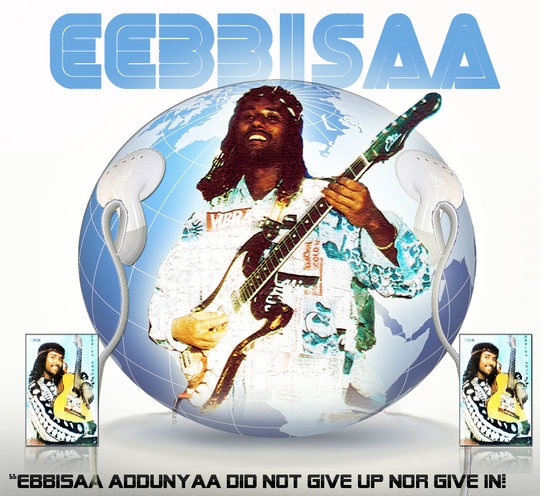 Over the last two decades, the late Ethiopian Prime Minister Meles Zenawi’s reign saw an unprecedented killing, torture, and harassment of those who dared to speak truth to power.

Seen as a threat to their power, the Oromo, Ethiopia’s largest ethnic group, paid a hefty price. Oromo students were dismissed from institutions of learning in large numbers, Oromo artists were either killed or forced into exile, thousands continue to languish in prisons across the country and many others lead a life of exile in their own homes.

One notable artist, Ebbisa Addunya, stands tall among many others who perished while fighting for greater Oromo rights. Ebbisa was a young vocalist who won the hearts and minds of his contemporaries. On August 30, 1996, Zenawi’s security forces assassinated Ebbisa at his own house in Finfinne. Following his tragic death, in its October/November 1996 report, the Oromo Support Group, a UK-based Human Rights group described the incident as follows:

Oromo nationalist singer Ebbisa Addunya and his friend Tana Wayessa were shot dead by government gunmen on August 30th. They were at Ebbisa’s home in the Shiromeda area, No 094, Higher 13, Kebele 01, north of the American Embassy in Addis Ababa, when gunmen burst in. Eyewitnesses claim the bodies were dragged from the house and put in a Land Rover with a government license plate.

The security men who carried out the murders first cleared the street. Residents who looked out of their houses after the gunfire were told to get back indoors. The bodies were recovered next day from the morgue at Menelik II hospital. Following the incident, Ebbisa Addunya’s uncle was called to see the Chief Security Officer of Addis Ababa. He was told that Ebbisa’s killing had been a mistake and that the target had been Tana Wayessa.

The eldest of five siblings, two brothers and three sisters, Ebbisa was born and raised in Dembi Dollo, in Western Oromia, Ethiopia.

For the enormous debt that my generation and I owe him, I dedicate the following poem to Eebbisa Addunya as we remember his legacy on this date. He was a young visionary whose message often wake me up in the middle of the night and make me ponder, “what have I contributed to end a century long suffering of East African people, particularly, the Oromo, if not yet how can I contribute?”

Ebbisa set a very good example of the difference one person can make. He used his talent to raise awareness about the trials and tribulations of Oromo people in such a way that even after more than a decade and half his words profoundly touch our hearts. He left us a matchless legacy. On August 30th, I want to see the thousands of martyrs who paid the ultimate price for my freedom through Ebbisa’s eyes.

Not lucky enough to witness how you looked

And asked what your plans were

For the people and country that you dearly loved

To never forget you

You are not here with us today

But your sprits have been

And will forever be

You left us with an everlasting memory

But I don’t understand why…

Why would someone commit such a horrible crime?

Taking you from home

In the middle of the night

Kill and drag you down the street?

What a cruel, coward

Was it to stop the just cause of 40 millions?

Or to frighten us not to speak up like you did,

And extend their colony over our land

Reign as king of kings again

And look down on us?

How ahead of them you were

And the most brave of your generation

Well prepared for anything

For the just cause you believed in

Or even giving life

You left us with a wonderful realization

Dying for a true cause

And praying to God (Allah)

To help during hardships

And you had a wish

Though you are not here to see

God has shown us some signs

Signs of your prayer

Just a few days ago

God spoke to us

Touched us with his invisible hands

Don’t cry when they hurt you

Don’t feel unhappy with me

Because you don’t have power

Leave your sorrows to me

And I will show you

How the powerful one breaks

How the powerful one cries

Now sixteen years after you rest

The sun is about to shine on Oromia

Your message still drives us

Rings in our ears

For freedom and justice

You are always remembered

It is special one

Dear Eebbisa, may your soul REST IN PEACE!