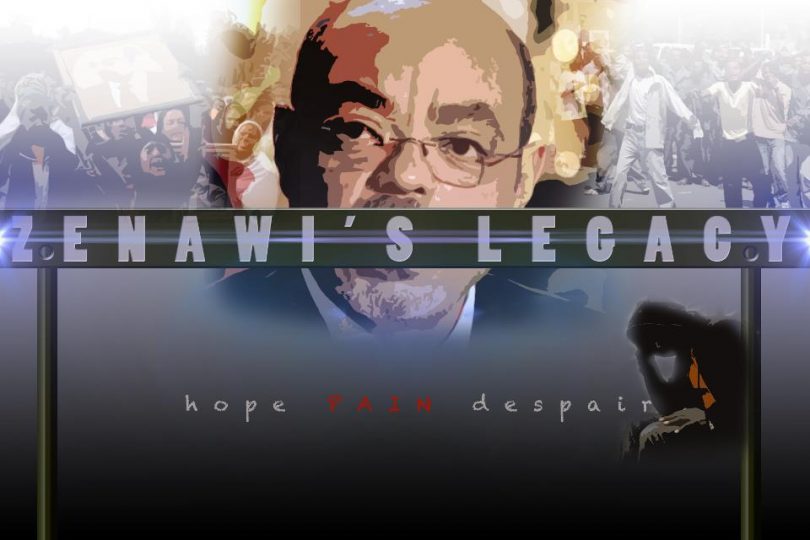 The death, mourning, and funeral of Ethiopian Prime Minister Meles Zenawi, an ascribed dictator hailed by his supporters as a hero, remained the biggest news story for the second half of August.

Meles was a tyrant who tried to institutionalize authoritarianism and make it acceptable . No one yet knows how he died, but that is part of the secrecy, which shrouded his authoritarian rule. Rumor has it that a blood cancer, brain tumor, liver disease or a cumulative of these conditions caused his early demise.

A lot has been said about the legacy Mr. Zenawi had left behind: both bad and good – by foreign dignitaries, journalists who covered him, and ordinary folks alike. I was particularly moved by one Facebook post from a young man in Minnesota: “It’s like God said to the TPLF, let my people go or else I will bring plague number 10 to all first born [leaders].” It seems like the angels are already clearing the house. The premier’s demise follows the death of powerful Ethiopian Orthodox Church Patriarch, Abune Paulos. The apocalyptic types say there will be many more in the days and moths ahead.

But why didn’t Ethiopians hold Zenawi dear the same way outsiders heaped praises on him?

A Big Man and Darling of the West

Most Ethiopians know why the West backed Zenawi’s regime and why his death is so widely mourned. For nearly two-decades, Western countries considered Ethiopia an influential regional powerhouse for stability and a bulwark against the rise of Islam.

Under Zenawi’s leadership, in a region that lacks both security and stability, Ethiopia became a key partner for the United States, UK and the European Union. The West sees the Horn of Africa as a hotbed of terrorist activities, making it a focal point in the protracted global war on terror.

After establishing a pro-western and anti-Islamist state in one of the most troubled corners of Africa, Zenawi – a former Marxist-Leninist rebel turned autocrat – offered to police the region on West’s behalf, proving himself as a reliable ally who can deliver, even if loathed in some circles as a cunning tyrant.

Zenawi will greatly be missed by the west mostly for his crucial role in fighting Islamic militancy in neighboring Somalia. His death has left politicians and western strategists scratching their heads about who or where to find a dependable partner. All agree that Meles had left a big shoe to fill for his successor, whoever that maybe. No politician in the EPRDF coalition, the ruling party, is poised to sufficiently cope with insistent Western strategic demands as well as mounting domestic pressures. Diplomats quietly whisper, the odds of finding another ‘strongman’ of comparable intellect in Ethiopia are now remote.

The West, especially the United States, failed to invest in Ethiopia’s social, economic and political institutions. They wasted two-decades empowering one dictator and turned blind eyes to civil society’s foul cry. They looked the other way as Zenawi’s regime dismantled domestic opposition and free press but continued to report his regime’s gross human rights violations. Zenawi’s failure to establish a rule of law, an independent judiciary and democratic institutions has put the country on uncertainty course and a possible upheaval, which many now say seems likely.

Under Zenawi’s reign, Ethiopia’s free press environment tightened. The civil society was systematically eliminated. Innocent dissidents asking for basic human rights were indiscriminately harassed, imprisoned, tortured, and even killed. Farmers were forced off their ancestral lands to make way for commercial agro-business. Human Rights Watch says, “in the name of development, the [Ethiopian] government forced some 70,000 farmers and pastoralists off their land into under-serviced villages while agribusiness investors waited in the wings. Local protests might have yielded fairer treatment of the displaced, but government repression made that impossible.” Meanwhile, the West continued to praise Zenawi’s role in bringing ‘stability’ to the Horn of Africa and pump foreign aid into his coffers.

On Economy and Human Rights

Zenawi came to power promising democracy but left as a ‘big man’ in many respects comparable to his communist predecessor, Mengistu Hailemariam. Admired by outsiders, Zenawi subjected his own people to an unbearable misery. Many in Ethiopia, who have been coerced by the state to mourn his death over the last two weeks, don’t necessarily see his demise as a tragedy. Even if they could not openly rejoice over his death, millions are celebrating the end of a tyrant – even if in their hearts. Zenawi was a skillful politician, one who mastered the art of western diplomacy. He knew what to say, to whom and how to deal with outsiders. But most Ethiopians harbor strong detest for the surfeit of his arrogance, hypocrisy, and the manners with which he spoke to them through television cameras.

Journalists and politicians acknowledge his efforts to transform the country’s economy, even if not worthy of the heroic accolade. Since winning 99.6 percent of seats in parliament during the 2010 poll, Zenawi used the Growth and Transformation Plan to hush up domestic opposition in the name of development and look outwardly inspirational. He authored book chapters and became an apologetic advocate for China’s developmental state model while criticizing what he called the “ neoliberal paradigm of development.”

In appearance, it was very powerful to convince the outsiders but in reality it is merely a paper tiger. It did not lift the poor out of poverty, as the Obamas would like us to believe. Ethiopia’s poor got even poorer as Zenawi’s cronies like Saudi billionaire Sheik Mohammed Al Amoudi monopolized the economy and became billionaires. Conglomerates like EFFORT, run by Zenawi’s widow, Azeb Mesfin, have accumulated so much wealth while Ethiopia’s poor, the majority, still gets by on less than $2 a day and is chronically food insecure.

Zenawi’s dubious transformational plan aims for sustainable economic development and social justice. However, in 2011, Ethiopia ranked among the bottom poorest countries in the world on UNDP’s Human Development Index (174 out of 184 countries). It also ranked low on the multidimensional poverty index, which measures deprivations from rudimentary services such as health, education and living standard (72.3 percent of the population was in severe poverty).

In recent years, amid continuous rise in living standard, urban and rural population could not withstand the worsening economic environment. Inflation had skyrocketed and remains unbearably high. The national output and income does not sustain domestic demands let alone bringing net foreign exchange from exports. That is the Melesonomics for which he is so highly regarded. Zenawi treated economic growth and development as synonymous, risking confusion. The measure of economic growth in percentages has a misleading behavior, and its power is insignificant. As far as economic welfare theory is concerned, economic growth has negligible impact on the country’s long-term economic progress.

At the absence of independent and robust alternatives, international media and institutions rely on government-provided statistics to tell us about Ethiopia’s miraculous turnaround. But for years, Zenawi tried, unsuccessfully, to convince the people of Ethiopia about his double-digit economic growth.

Former opposition leader and MP, Bulcha Demeksa, once asked Zenawi how on earth Ethiopia secured a double-digit growth rate while having no oil reservoir. Zenawi simply dodged the question and touted his regime’s “ongoing development projects.” Growth rate is not a good indicator of aggregate economic outcome and progress. And evaluation of economic outcome must incorporate development indicators such as human development index, sound policies, institutions, and pro-poor practices.

In all, no matter how the West chooses to remember or eulogize him, Zenawi’s true legacy will endure in the hearts of the people he oppressed – those whose mothers, fathers, brothers and sisters his security forces massacred. Zenawi left behind political and economic institutions that only generated systematic conflict and human rights violations. His death has thrown Ethiopia and the Horn of Africa onto an uncertain path.

If any lesson is worth drawing from the death of another western backed strongman in Africa, it is this: reliance on one-strong man at the expense of investing in institutional development is costly and unsustainable. Only the establishment of genuinely democratic institutions and multiparty political systems could reduce West’s security concerns in Africa. A blind support for undemocratic leaders, as was seen in Zenawi’s case, will only serve to create fragile and precarious stability.

*Mamo is a former Assistant Lecturer at University of Gondar, and a recent graduate of London Metropolitan University. He’s currently pursuing a PhD in Economics at the University of Sussex. He can be reached at getnemera@hotmail.com or at his blog.