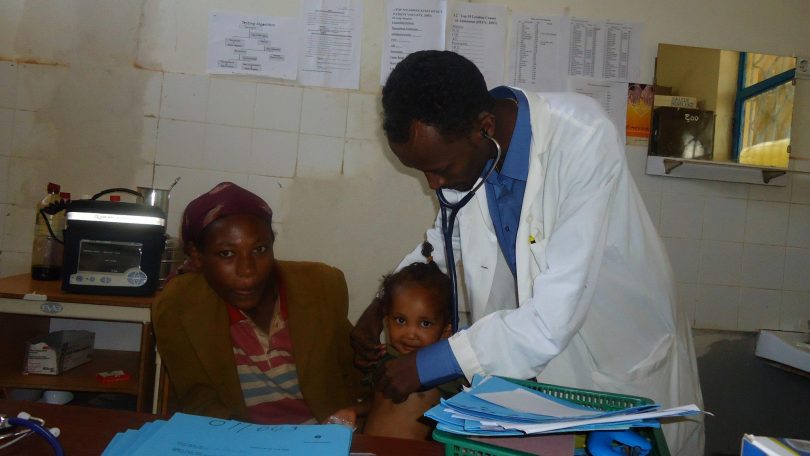 Since the advent of “organized medical practice” in 1896, when the Russian Red Cross built the first hospital, Ethiopia has experienced a rapid expansion of the delivery of healthcare that lasted well into the 20th century.

The establishment of the Ministry of Health in 1948 played pivotal role in centralizing healthcare and leading a concerted effort that resulted in the construction of 93 hospitals (public and private), and a sizable increase in the number of physicians in the public sector.

But, even with donor-funded and much celebrated projects such as the community-based health extension program,the trends in the past twenty years tell a different story. A population boom, with a record rate of growth averaging 2.1 percent over the last five years according to a World Bank report, coupled with minimal infrastructural development has taken a heavy toll on every aspect of the country’s livelihood, especially on the healthcare sector.

In a 2005 strategy report, the World Health Organization, found Ethiopia’s population per primary healthcare facility to be 24,513, a ratio triple the rest of sub-Saharan Africa.  With only 13,469 hospital beds in the entire country, the figure comes to one hospital bed per 5,276 people and exceeds the average ratio for the rest of sub-Saharan Africa five-fold. As bewildering as these figures may seem, facilities and material resources are only a fraction of the complex problems that weigh on healthcare in Ethiopia.

This brings me back to a topic that I began to tackle while I was back home and promised to share regarding healthcare in the country.  I wrote a blog about the state of healthcare delivery in Ethiopia but decided not to publish it while I was actually in the country. Taking the extra time to ponder my statements, however, proved to be an eye opening experience and I hope that translates into what I share here.

In one blog entry during my trip, I wrote about a humanitarian project that is taking aim at remedying the symptoms of a broken system. While such efforts are dire and help thousands of patients every year, they cannot solve the problem at its root.  The issues are complicated and involve many facets of healthcare. One obvious problem is the overall lack of medical resources in the country, which could easily be attributed to the still fledgling economy however a growing issue has become the lack of medical personnel, especially physicians, to handle the expanding healthcare burden.  How is it that a country with more medical schools than Ghana and South Africa has significantly lower ratio of physicians to population than most of sub-Saharan Africa?

In a conversation with medical faculty at one of Ethiopia’s premier medical schools, I learned that the incoming class size for first year medical students has grown to 400 every year.  These are the best and brightest, so let’s indulge and say only 75 percent graduate (even though it is much higher), we’re still talking about 300 new doctors generated from one medical school in one class.  A very conservative extrapolation of this data could suggest an average of anywhere from 1000 to 1500 new physicians graduating every year from Ethiopia’s 12 medical programs.  Compare that to the most recent census data from the CIA Fact Book, which estimates Ethiopia’s population at 94 million and the problems seem to take shape before our eyes.

The fact that physician shortage exists in Ethiopia may not be groundbreaking news but the evidence shows that the problem is only getting worse.  One promising fact, however, is that the majority of Ethiopia’s medical schools are only a few years old and have yet to really impact the numbers in a positive way.  This will be an interesting trend to watch as these programs gradually begin adding to the physician pool.

While the of total number of physicians in the country may represent a steady ebb and flow state, the number of physicians who practice in the public sector has been dwindling. Most doctors opt for better-paying jobs with NGOs and private hospitals where the average citizen cannot afford to access their care.  This adds to the physicians who are physically leaving the country for a chance at a more financially rewarding future in economically developed nations.

How did the problem get to this point?  Well the simple answer is that it’s brewing for quite some time now. A 1988 article in the New England Journal of Medicine estimated the physician to population ratio to be one to 57,876. The journal’s report, however, precedes a period of widespread physician attrition (1990-2006) where the total number of physicians in the public sector reached an all-time low of 638 in 2006.

These figures are even more alarming at the regional level.  For instance, in December 2006, a physician to population ratio in the Oromia region was one to 220,000.  A field report the following year by WHO noted that the Oromia region contains 29 hospitals, 192 health centers, 895 health stations and 1070 health posts. These include facilities owned by government, private sector, and NGOs. According to the report, there were about 8,172 health professionals serving the Oromia region,an estimated 40 million people. The numbers indicate potential health service coverage for 70.5 percent but health service utilization remains at mere 27 percent.

These statistics beg the question; is anything being done to stop the outflow of physicians or increase the number of available providers?

The answer is yes but the consequences may be even more complicating than helpful in the long run. In an effort to increase the number of healthcare providers, the Ministry of Health has employed two major initiatives to address these issues.

1) Physicians are now required to serve in the public sector for a number of years or pay a sum of 450,000 birr (that’s $26,300) before they receive their diplomas. (Public education is free in Ethiopia.) Since the average physician salary is far less than a fraction of that cost, this is not even an option. Thus, they remain in the public sector a few years longer before making the move to the private sector or leaving the country.

2) The Ministry has also created a relatively new breed of health professionals called health officers. Under this promising plan, health officers receive training from doctors and function as physician extenders (like nurse practitioners) who can also perform general surgery. The idea of creating such a profession is that they function as doctors, but have no credentials to do so anywhere else in the world, so they too are bound to practice in Ethiopia.

The necessity for measures to counteract the loss of healthcare providers is not in question. But the government initiatives, while a good starting point to steer the system in the right direction, may have negative consequences. In the next installment, I will continue with other factors weighing in the balance as well as suggestions for the Diaspora-based health professional interested in influencing the direction of healthcare in that country.  As always thank you for reading and stay tuned.

*Gelane Gemechisa is a fourth year medical student at University of Maryland. Last year, she spent four months doing clinical research and clerkships at Black Lion Hospital in Addis Ababa and Dembi Dollo Hospital. For comments on this story, contact the editor: editor@opride.com