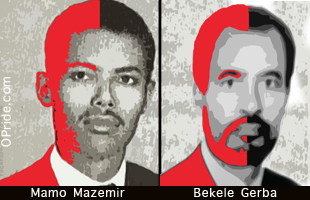 On November 1, 2012, Ethiopia’s kangaroo court convicted nine Oromo nationals, including opposition leader Bekele Gerba, who was nabbed on Aug. 27, 2011 after meeting an Amnesty International delegation, under that country’s sweeping anti-terrorism law. Their sentencing is scheduled to take place in a few weeks.

The Oromo term roorroo connotes more than its often used English equivalent, injustice. It denotes, in the words of anti-apartheid leader and the greatest statesman of our time, Nelson Mandela, a time “in the life of any nation when there remain only two choices – submit or fight.”

Gerba, the Vice-President of the Oromo Federalist Congress (OFC), knew too well that his oppressed nation faced such a trying moment under the rule of the Ethiopian People’s Revolutionary Democratic Front (EPRDF). The courageous Gerba chose not to submit. He valiantly fought against the violence suffered by the Oromo not with guns but through a non-violent means as a parliamentarian and an opposition party leader.

Finding Gerba’s peaceful actions protected by the constitution treasonous, the EPRDF regime which considers any form of dissent and Oromo nationalism a high crime, charged him under its draconian terrorism law.

Three of the defendants – Bekele Gerba, Olbana Lellisa, and Olbana Lammi – asked the presiding judge to speak without a lawyer. Gerba was the first to rise.

In my life time, I have opposed injustice, discrimination, ethnic favoritism, and oppression,” he told the court.

I am honored to learn that my non-violent struggles and humble sacrifices for the democratic and human rights of the Oromo people, to whom I was born without a wish on my part but due to the will of the Almighty, have been considered a crime and to be unjustly convicted.

The judge interrupted reprimanding him for not saying anything that would gain him the court’s leniency in sentencing. “If apology was warranted,” Gerba continued.

I would seek it not from the court that found me guilty of a crime I did not commit but rather from my people as well as the Almighty; for my people for failing to fully speak to the depth of their suffering in the interest of the co-existence of peoples and from the Creator if my zealous defense of the rights of the Oromo people was done to further my personal interest or to aggrandize my personal fame rather than to promote the long-term desire of all the people of the country to live in freedom, dignity, and equality.

Gerba is not the first to deliver a ringing indictment of the injustice of Ethiopia’s justice system. But, few have done so as eloquently and as fearlessly. His courage to speak knowing that after the dismissal of his wife from her job, his kids will go hungry without a provider underscores his commitment to a higher cause.

The words of heroes inspire as much greatness when uttered in misfortune as in times of triumph. Nearly half a century ago, addressing his executioners, after a death sentence handed down by a similar kangaroo court under trumped up charges, Lieutenant Mamo Mazemir, one of the trailblazers of Oromo emancipation, uttered those often quoted words that were seared into the minds of generations of Oromo freedom fighters.

Please tell my children that I did not die in vain. My blood is spilled for the just cause of the Oromo people.  I am certain that those who falsely convicted me, for a crime I did not commit and their rulers, will receive the appropriate judgment of Ethiopian people at this very spot I am being hanged. More importantly, sooner or later, the Oromo people will win their freedom by the struggle of its fighters.

The year was 1966, a time of general tumult in Ethiopia, before the big storm was to hit, and a period of national renaissance in Oromo history. After a long period of lethargy, the decade saw the awakening of the Oromo nation. In the South, the Bale uprising, led by the late general Wako Gutu had shaken the foundation of the brutal feudal system loosening the grip of absentee landlords on the countryside. The Oromo spirit was being rekindled by a cultural revival in the East, thanks to the monumental contributions of the likes of the legendary Oromo singer, Ali Birra. Most importantly, the heartland of Oromia was teeming with the first pan-Oromo movement, the Macca and Tulama Association, led by general Taddese Birru.

Forty years later, faces may have changed but little else has with the behavior of Ethiopia’s rulers. The law punishes political dissent as a crime while celebrating political freedoms in its books. The ideal of living in a democratic and free society, a dream for which Mandela was prepared to die and Gerba has resolved to endure long imprisonment, has still eluded the Oromo and all people of Ethiopia.

One thing is for sure: Gerba’s speech will go down in the annals of Oromo history on par with the famous words of prisoners of conscience like Haji Robale Tura, Mamo Mezemir, Taddessa Birru, and Haji Adam Saddo.

To the extent that being a self-respecting Oromo and a lover of liberty are viewed as a crime in Ethiopia, we are all guilty of this capital offence. In a way, we are all Bekele Gerba today. So long as Gerba followed in the footsteps of the pioneers, Mamo Mezemir is not dead; he lives in Bekele Gerba and the millions who strive to see freedom and justice prevail over tyranny in Ethiopia.

*This article has been updated with corrections in the first paragraph.