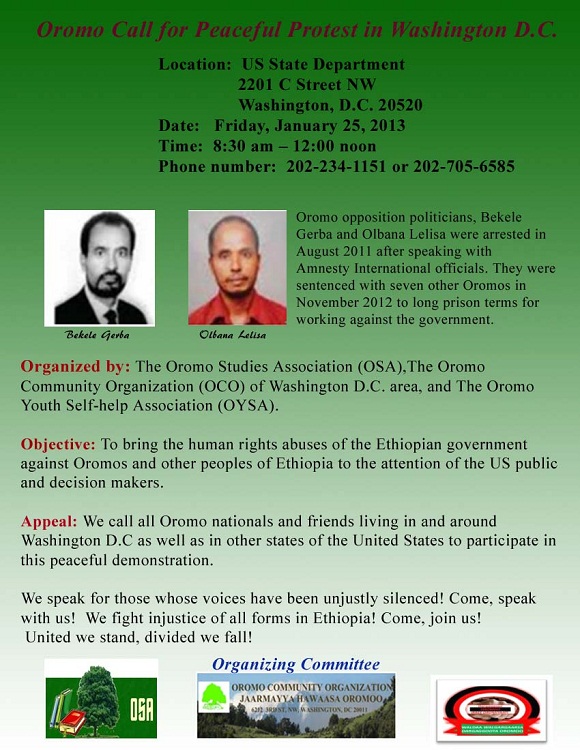 Ababa Itana’s phone rings nonstop. Activists call to inquire about plans for making placards for upcoming rally at the U.S. State Department to protest against Ethiopia’s handling of Oromo political prisoners. He takes another call to touch base with a local radio host about a scheduled interview later today before settling down to explain the objective of the event.

“The purpose of this rally is to bring to light the arrest, killing, and mistreatment of Oromo political prisoners in Ethiopia…and ask the U.S. government to put pressure on Ethiopia,” said Itana, chairman of the DC-based Oromo Youth Association, one of the community groups organizing friday’s protest.

The current campaign is hardly new. Since Ethiopia’s ruling party, the EPRDF, came to power in 1991, Oromo dissidents and intellectuals, especially those suspected of having links to the Oromo Liberation Front (OLF), have been unfairly and ruthlessly targeted.

The trials of Oromo political prisoners — and, more broadly, the lingering Oromo questions and persecution in Ethiopia — has been a rallying cause for the global Oromo diaspora from the United States to Canada, Western Europe, and Australia.

Oromo and international human rights organizations have extensively documented the torture, disappearance, and even extrajudicial killings of Oromo activists. With an estimated 20,000 Oromo political prisoners, it’s been said that Ethiopia’s overcrowded prisons speak Afan Oromo. However, despite its well-documented dismal record on human rights, Ethiopia, a key U.S. ally in the Horn of Africa, receives more than $3 billion a year in foreign aid, mostly from the U.S. and the U.K, according to Human Rights Watch.

This is an all-too-familiar story for Itana, who has been in and out of jail most of the last decade. He emigrated to the U.S. two years ago, having seen life on the other side of such notorious prisons as Kaliti and Maekelawi.

“Ninety percent of political prisoners in Ethiopia today are Oromo,” he said. “I can attest to this fact because I have been there.”

The Oromo, who make up about 50 percent of Ethiopia’s 92 million people, are facing a dual oppression, Itana said. “They are targeted both for their [ethnic] identity and religion,” he said alluding to the growing crackdown and harassment of Muslims in Ethiopia.

Since peaceful protests for religious freedom by the Muslim community began earlier last year, at least eight people have been killed in clashes with police. The committee of seventeen, which was elected to mediate between the protesters and government, along with 30 others including Habiba Mohammed, the wife of disgruntled former minister Junedin Saddo, remain incarcerated on terrorism charges. Activists and rights groups accuse Ethiopia of using overly broad anti-terrorism law to criminalize legitimate dissent.

Itana insists the violations of Oromo human rights is unique in the context of Ethiopia’s contested history of conflict. “As Oromos, we have a responsibility to echo their voices…but that doesn’t mean we don’t care about other’s rights,” said Itana. While those with similar grievances, human rights activists, and friends of Oromo people are urged to join in solidarity, Itana says the plight of Oromo prisoners is often overlooked and underreported.

Oromo exiles in Washington D.C. metro area and surrounding cities in the northeast region are expected to take part in the demonstration this Friday Jan. 25 in front of the State Department. The activists hope that amid inauguration festivities, and with many tourists still in town, the morning rally — which starts at 8:30 a.m. — will shine a much-needed light on their campaign.

A similar protest will be held in London in front of the Foreign and Commonwealth Office the same day.