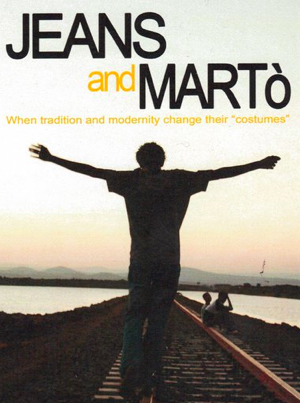 “You have a nice pair of jeans,” I tell Roba in midtown Manhattan on a recent Sunday afternoon. “I brought my Martò too,” he responds with a grin. The Martò (Marxoo in Afan Oromo) is a traditional garment worn around the waist by Karrayyu Oromos.

Roba Bulga was in New York to attend the screening of Jeans and Martò, a multiple award-winning documentary about his life and the community in which he was born. The screening took place at the 2013 edition of the New York African Film Festival presented by the Film Society of Lincoln Center. This year’s festival marks two decades of “introducing American audiences” to the best of African cinema, according to the organizers. Over three days, Roba attended several screenings of his film that were followed by engaging Q&A sessions with the audience.

Jeans and Martò tells the story of a young pastoralist who escapes arranged marriage and travels far from home and his close-knit Karrayyu community to make a life of his own. The film captures the story of an individual and a community as they negotiate traditional ways of life and the rapidly encroaching forces of modernity. The ever-present tension between these two forces unfold over 50 minutes in this compelling autobiographical tale both about Roba and his Karrayyu community.

When the Italian filmmakers, Clio Sozzani and Claudia Palazzi, first showed interest in telling Roba’s story, he says, “I wasn’t convinced.” But he eventually agreed to work on the script after several consultations.

The Karrayyu reside in the Fantalle District of the Oromia region in Ethiopia, within the Great East African Rift Valley. As one of the few Oromo groups to have preserved their indigenous tradition and pastoralist way of life, the Karrayyu are seen as the guardians of Oromo cultural heritage. The Karrayyu still predominantly practice Waaqeffannaa, a monolithic religious belief in a supreme being called Waaqa. They are also one of the few Oromo tribes, along with the Borana, who continue to be governed by the Gaada system, a democratic political and social institution that organizes the life of individuals in the society from birth to death.

Roba was 18, and in 10th grade, two weeks away from marrying the girl arranged by his father when he ran away 200 kilometers to Addis Ababa, Ethiopia’s capital.  Roba’s escape defied the life his parents planned for him even before he was born. Like the rest of the boys in his community, he was to drop out of school, marry and lead life raising livestock as a pastoralist among his Karrayyu tribesmen.

A major aspect of the film explores how Roba’s decision to leave the community strains his relationship with his family. In Roba’s absence, his older brother, Jilo Bulga, had to take Roba’s bride-to-be as his second wife, as per Karrayyu custom. This left Roba at odds with his parents and the community at large. He had to ask for forgiveness and reconcile with his parents, who at once felt betrayed and humiliated by Roba’s action.

The film also depicts Roba’s personal struggles in coping with a lonely city life in Addis Ababa, where he knew no one and was far removed from the camels and the sounds they make, which Roba says he misses the most. “Anxiety is killing me, I can’t sleep during the day or at night,” Roba tells his younger brother during one phone call shortly after his escape.

Roba finds himself filled with an internal sense of self-doubt. “They are right,” he says of his parents who wanted all the best things for him as prescribed by their culture. “But I think I am right too,” he pauses. “I just have to do what I want to do.”  To deal with his anxiety, doubts, and frustrations, Roba turned to empowering himself with knowledge. “I spent a lot of time reading,” says Roba.

Determined to achieve his dream of education and returning to Fantalle to help his kinsmen as they strive to maintain their ways of life, Roba finishes twelfth grade at Aqaqi Adventist School and later enrolls in Foreign Languages and Literature at Addis Ababa University. A choice he says wasn’t optimal but one he couldn’t change as schools in Ethiopia assign college majors. He also had an opportunity to study at the Slow Food’s University of Gastronomic Sciences in Northern Italy. His master’s thesis, the Importance of Camel Milk at a Time of Dramatic Change: The Case of Karrayyu Oromo Pastoralist (Ethiopia), is now one of the four projects run by Slow Food, which Roba overseas in Ethiopia.

When Roba gets an invitation to attend the inaugural conference of Terra Madre, a gathering of food growing communities organized by Slow Food in Italy, he returns back to Fantalle to announce the news. He is met with suspicion and outrage from his father. “I don’t understand you anymore but there is nothing more we could do,” he tells Roba. “How could you go to a place that I [your father] have never visited?” Roba acknowledges his father’s suspicion and outrage. In Italy, Roba attends the inaugural conference of Terra Madre where he says he gained a useful perspective about the world and his own community’s food practice. 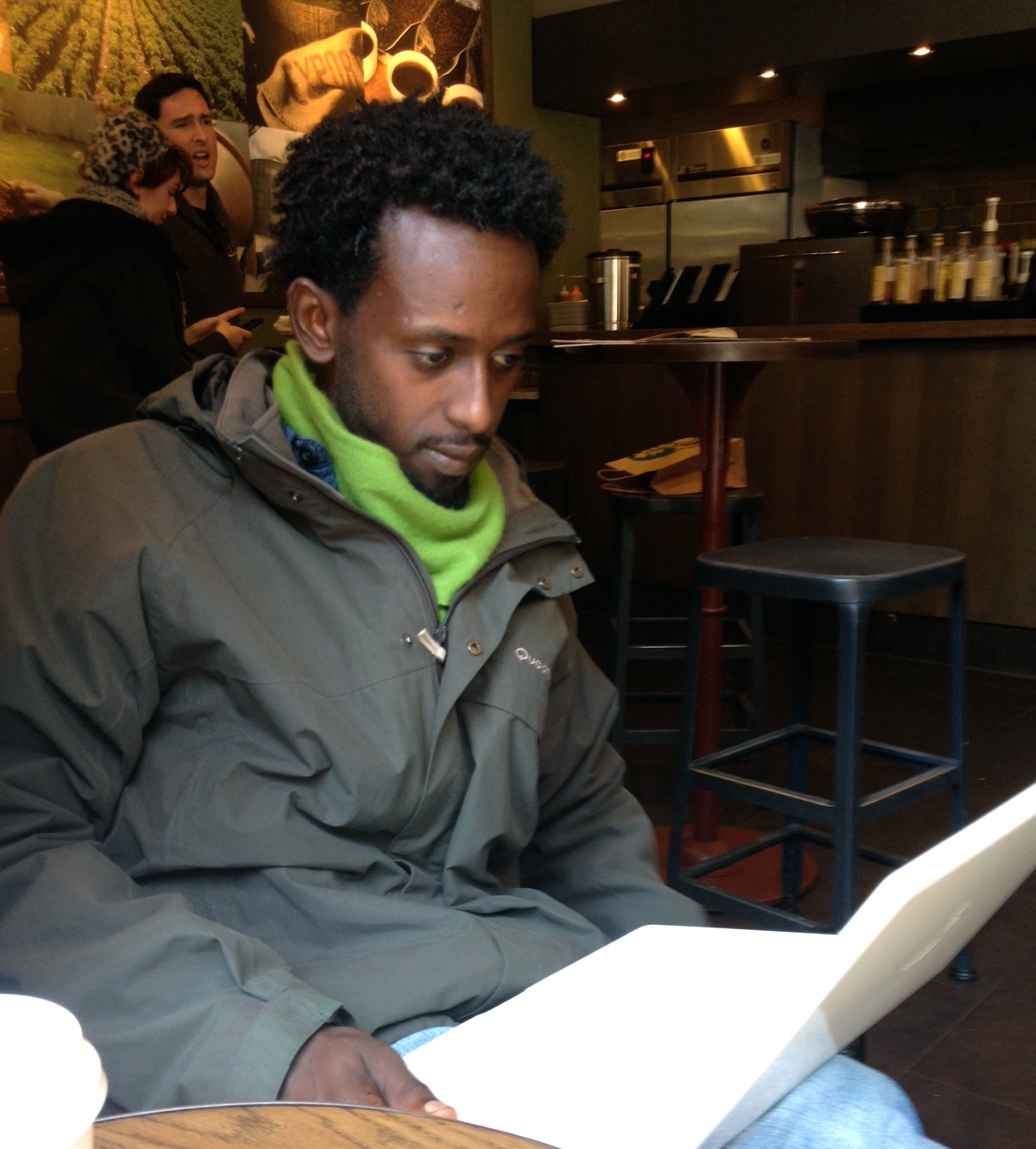 At 27 years old now, Roba has travelled far and wide than an average Oromo kid from rural Ethiopia. He has a full time job and occasionally travels around the world for conferences and film screenings.  But his main preoccupation lies elsewhere. “I want to find ways to make tradition and modernity work together for a better future not just for the Karrayyu but pastoralists everywhere,” says Roba. He is already doing some of that.

In 2009, along with other friends, Roba launched Labata Fantalle, a non-profit organization whose mission is to support Karrayyu pastoralists through “sustainable, participatory and community-led projects that are friendly to the people and their environment.” Behind Labata’s mission is a belief that  “development should be led locally and go hand in hand with culture,” Roba tells me.

The dark side of modernity

In one of the scenes in the film, we see a drought-affected Karrayyu land where climate change, water shortage, conflict, years of neglect by successive Ethiopian governments, and shortage of grazing land makes life the more unbearable. The Karrayyu think all their problems are the work of Waaqa says Roba as sadness overcomes his face.

The Karrayyu have already lost a substantial portion of their land to state-led commercial enterprises. The Awash National Park has taken over 60 percent of what used to be Karrayyu land. In the 1950s, the Dutch established the Matahara Sugar factories and its vast sugar estate, displacing the local people and taking their land without any compensation. According to the World Bank, dikes built to protect the sugar plantations restrict the water flow raising tensions over water governance among different ethnic groups in the area. Government-run agribusiness schemes continue to chip at their grazing lands, water points, and religious sites. Despite corporate expansions into the area, the Fantalle district is one of the least underdeveloped in Ethiopia with a very poor road and telecommunication infrastructure.

The Karrayyu are highly dependent on Awash river as a source of water for drinking, their livestock, and small scale communal farming. However, in addition to the dikes which limit the water flow, the pollution of Awash river by state-run factories pose a serious health hazard to the Karrayyu and their livestock. Periodic drought due to delayed rainfall, livestock disease, and conflicts with neighboring communities, primarily the Afar and Argobba, perpetuates the worsening livelihood of Karrayyu Oromos. However, Roba points out that the recurrent ethnic conflicts are usually over access to resources (grazing land and water) and land rights. Land is communally owned among the Karrayyu.

Currently, a government-led irrigation scheme funded by the World Bank is trying to convince the Karrayyu to embrace agro-pastoralism.  This is threatening to further erode their grazing lands and livelihoods along with the Karrayyu cultural heritage – much of which revolves around the pastoral way of life. “The Karrayyu don’t know how to farm,” says Roba. “They are not familiar with money. It is going to be difficult to tell them to leave animal herding, and take up farming.” But this seems the role Labata Fantale is trying to play. To bridge the gap of knowledge and orient the Karrayyu into slowly diversifying their income through capacity building programs such as training on organic farming and resource management techniques.

If anything, Jeans and Martò has given Roba a bigger audience and platform to tell his story – the Karrayyu story. Roba’s quest to discover the positive sides of tradition and modernity – and reconcile the tensions – continues. His remarkable story has already affected the lives of Karrayyu children who now see the value of education. The Karrayyu today, including Roba’s own parents, are urging their children and grandchildren to go to school. In 1995, when Roba started first grade, there was only one school – the Dandi Gudina Elementary and High School founded by a local NGO, the Gudina Tumsa Foundation. Today, there are more schools in the area, which means that kids in Fantalle district don’t have to make a long commute on foot as Roba did.

The film is dedicated to Roba’s older brother, Jilo Bulga, who married Roba’s wife-to-be but was killed in an Afar vs Karrayyu conflict while Roba was still in school.

Roba, who suggests meeting the right people was a reason for his success, says Jeans and Martò is not just his story. “It’s a universal story of conflict with culture,” he says. “But it allowed me to understand myself, the richness of my culture, and gave me a broader context to the world.”

A natural orator and poet, Roba can layout the Gadaa system and the Jila festival of power transfer from one Abba Gadaa to the next by heart.

And he is very humble about it.