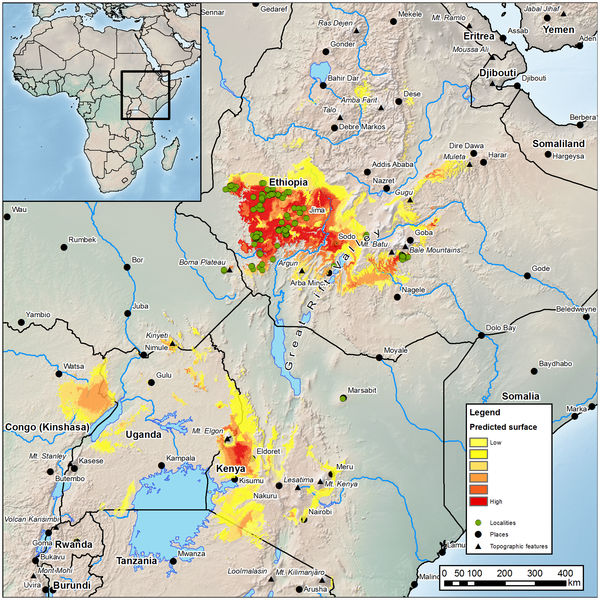 (OPride) – A recent massive brush fire in the Illu Abba Boora zone of Oromia region, Ethiopia has wiped out a sizable portion of the UNESCO-registered Yayu Coffee Forest Biosphere Reserve, reports said. The cause of the blaze, which has spread around the Yayu forest over the last several weeks, remains unknown.

According to eyewitness accounts, the blaze has scorched an estimated 50 to 80 acres of the thick coffee forest. “Such fire has never happened before in the history of the Yayu forest and the knowledge of the people living in the area,” one Yayu resident, who asked not to be named, told OPride. “It has been burning for several weeks without any intervention from the government except that of the local community to contain it to protect its advancement to their side.” The internationally recognized Yayu forest is home to the last remaining species of wild coffee Arabica and some of Ethiopia’s rare flora and bird species.

Several diaspora-based activists have accused the government for setting the forest ablaze to make a way for its development projects. The state-run media ignored the fire, and instead reported on a new fertilizer factory being built near the area. Citing several “journalists working for the government TV and radio stations,” New York-based political analyst Jawar Mohammed said, Ethiopian authorities have once again imposed a media blackout warning local reporters, including those working for state-run media houses, not to cover the story.

EPRDF, Ethiopia’s ruling party, now in power for 22 years, has been accused of setting forest reserves on fire in the past. For example, in 1999 and early 2000, a similar forest fire in Bale and Borana, also in the Oromia region, led to Oromia-wide student protests and the government’s slow response caused a strong public outcry. At the time, instead of putting out the fire, the government resorted to cracking down on students.

As was the case in 2000, eyewitnesses said the government is blaming the current fire on locals amid reports of some arrests. “The Ethiopian regime is known for playing the blame game on others for its own crimes,” another Yayu native told OPride last week. “The government doesn’t want the image of the coal mining and fertilizer factory projects to be associated with such environmental destructions,” the source said. Eyewitness reports indicate that the government alleges, “the fire was lit by people doing forest honey collection, a process associated with the life of the local people.” The OPride source noted, the locals lived collecting honey for generations, “but never witnessed such incidents of disaster.”

According to a new research by Plos One, a peer-reviewed online international publication, while there is some wild coffee in the Bale mountains range, the Yayu forest has “the largest and most diverse populations of indigenous (wild) Arabica” anywhere in the world.

Ethiopia’s overall forest reserves have dwindled in the last two decades due to growing population, land scarcity, and uncontrolled deforestation in the name of development. In 2010, the Food and Agricultural Organization (FAO) estimated Ethiopia’s forest cover at 12.2 million hectare or 11 percent of the total landmass. The study noted a decline from 15.11 million hectare in 1990 (a year before the current regime took office). While statistics on forest fire is rare, the FAO study said, “in 2008 fire affected 16 163 hectare of land in the autonomous region of Oromiya.”

UNESCO Biosphere Reserves are meant as sustainable development test cases in efforts “to reconcile conservation of biological and cultural diversity and economic and social development through partnerships between people and nature.” The Yayu forest reserve is one such effort by the international body to find sustainable ways for the forest to be preserved. But as another Yayu native, who asked not to be identified due to fear of repercussions told OPride, little has been done besides symbolic UNESCO designation as the initiative crosses the “the political border of national development interest.”

The source added, the federal “government never really supported the designation of the Yayu afromontane forest area as a UNESCO reserve.” “Rather, a team of scientists at Addis Ababa University led by Dr. Tadesse Woldemariam, which used the forest as a research base for several advanced studies supported by German based institutions affiliated to the interest in the forest coffee put a great deal of effort into this.”

Evidently, the federal government has struggled with how to proceed with its development agenda in the area. According to our source, more than ten years ago, local youth raised concerns that the development objectives didn’t offer benefits for the local people. To “address” this local discontent and lend the projects some legitimacy, the federal government turned to few elites who grew up in the area but whose parents were relocated from Tigray during the infamous 1985 famine. Speaking about the government’s efforts to assuage local grievances, the source gave an example of certain Getachew Atsbeha, a graduate of the local high school, who flew in with an Ethiopian Defense Forces helicopter last year leading a team of visiting researchers of the new project.

While the recent Yayu forest fire has been contained, in large part thanks to heavy rain and community involvement, the lingering issues over planned projects remain. “The government seems intent on selling the land,” one caller said on ESAT Radio program last week. “People have been displaced to make ways for the factories…government officials and state-owned enterprises are moving in…even the daily laborers are coming from Tigray.”

According to sources familiar with the ongoing projects, the main project under construction is a multi-purpose fertilizer factory. “The project became a cause for developing the area such as the road in Yayu town and constructing houses for the staff in the project,” the source said. “This has direct links to other national projects such as the sugar industry…the fertilizer will be used to support the sugarcane production, while other mechanized farming in Gambella and Benishangul regions [are expected to] become immediate consumers.” As fertilizer prices continue to soar worldwide, the building of a local manufacturer would reduce the import of fertilizer. In addition, the sugar factories around the country would operate on coal that would be produced in Yayu alongside the fertilizer. The alternative energy source will then reduce over reliance on hydroelectric power.

Last January, local newspaper Capital Ethiopia reported, the state-owned engineering company, Metal and Engineering Corporation, “is on the right track to produce fertilizer for the next cropping season.”

By the end of the much-publicized Growth and Transformation Plan, which ends in 2015, “Ethiopia envisions building eight fertilizer companies in the Oromia Regional state as per its governing five-year economic plan,” the report said. “The construction of Yayu fertilizer factory number one and two will reach 65 percent and 33 percent completion rate, respectively, this year. The design work for the Dap factory is already completed, while civil work and equipment production is underway.”

The Ethiopian government has commissioned several feasibility studies on the Yayu coal reserves for many years. Most recently a Chinese firm called COMPLANT did a study with a price of 12 million birr. The study found the Yayu area has over “100 million tons of coal”, which could “produce 300,000 tons of Urea [used in the manufacture of fertilizer], 250,000 tons of Dap, 20,000 tons of ethanol and 90MW of electric power annually for decades.” Following the feasibility study, “in March 2012, METEC awarded the construction of the first fertilizer factory in the country to Tekleberhan Ambaye Construction Plc at a cost of 792 million birr,” according to Capital Ethiopia.

The government turned to COMPLANT, after a 2005 study by a European consultancy firm, Fichiner, deemed the project not environmentally responsible temporarily forcing the government to reconsider the project, according to Addis Fortune.