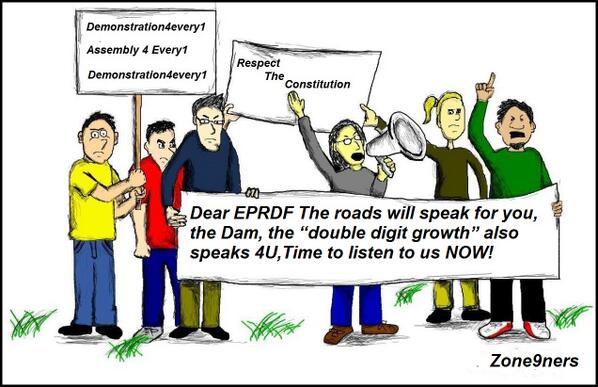 Under Twitter hashtags #Assembly4Every1 and #Demonstration4Every1, the Addis Ababa-based activists are requesting the government to uphold Article 30 of the constitution – which grants the right to freedom of assembly and demonstrations.

“Peaceful demonstration and assemblies are rights granted by the constitution to enable citizens to associate and express their common views of their choices,” organizers said in a statement. “[These rights need] to be respected.”

The three day-campaign, which runs from May 8 to 10, has generated a lot of interest around the social web. On Thursday, the activists said one of their hashtag, #Demonstration4Every1, was trending worldwide on Twitter. According to Tweet Reach, a website that analyzes Twitter hashtags, 50 of an estimated 1443 total tweets sent over the last two days have been viewed 86,994 times reaching more than 73, 000 people.

The last two campaigns by Zone-niners, as the group is called online, also urged the government to end its recurrent violations of rights protected in the constitution, and sought to inform the public of not only their constitutional rights, but also ways to “discuss and contribute to the betterment of Ethiopia.”

According to State Department report, Ethiopia requires organizers of large public meetings and demonstrations must obtain advance permits and access to municipal halls. “Local government officials, almost all of whom were affiliated with the EPRDF, controlled access to municipal halls, and there were many complaints from opposition parties local officials denied or otherwise obstructed the scheduling of opposition parties’ use of halls for lawful political rallies” the report said.

Owners of hotels and other large facilities refused hall rentals “citing unspecified internal rules forbidding political parties from utilizing their space for gatherings, for example, claiming that hotel meeting space could only be used for weddings,” the report added.

On its 2013 World Press Freedom Index, the watch-dog group Reporters Without Borders, which singled out East Africa as the “journalists’ graveyard”, ranked Ethiopia 137th.  Rife with censorship and crackdowns, Ethiopia’s rank, which decreased 10 points over the previous year, is reflective of the country’s “repressive application of the 2009 anti-terrorist law and the continued detention of several local journalists,” according to the report. Despite the release of the two Swedish journalists arrested in 2011, which garnered significant international media attention, many local journalists remain imprisoned.

“[This] decision further reinforces our serious concern about Ethiopia’s politicized prosecution of those critical of the government and ruling party, including under the Anti-Terrorism Proclamation… [t]he United States believes that upholding freedoms of expression, association, and other human rights is essential if Ethiopia is to realize its stated goal of being a democratic state. We continue to urge the release of those who have been imprisoned in Ethiopia for exercising their human rights and fundamental freedoms.”

Another journalist Reeyot Alemu, also serving a five-year sentence for critical reporting, was honored last week with the UNESCO/Guillermo Cano World Press Freedom Prize, for her “exceptional courage, resistance and commitment to freedom of expression.”

And still, there are other local journalists’ whose plights remain unknown.

Under the TPLF-led Ethiopian regime, scores of Oromo journalists have been harassed, exiled, and imprisoned. Censorship of Afaan Oromo media has left the Oromo people – the largest ethno-national group in the Horn of Africa – without an independent media outlet. Newspapers have shut down, shortwave radios are monitored or jammed, and diaspora-based opinion and news websites remain blocked.

Ethio-telecom, a government run enterprise, is the sole internet service provider in Ethiopia. According to a recent report by the University of Toronto’s Citizen Lab, the government has also taken to digital spying. Identifying a recently acquired malware sample as FinSpy, researchers found that the malware “uses images of members of the Ethiopian opposition group, Ginbot 7, as bait.” In 2011, the Ethiopian government labeled Ginbot 7 as a terrorist group, an action that Human Rights Watch and the Committee to Protect Journalists has criticized, citing its “chilling effect on legitimate political reporting about the group and its leadership.”

Under its sweeping anti-terrorism law Ethiopia has criminalized all forms of dissent. Opposition leaders and activists are given long sentences on trumped up charges. Yet, the country continues to receive a generous aid flow from donors, including the United States. Ahead of his upcoming trip to Addis Ababa for the AU summit, scheduled for May 17-19, 2013, the Oromo Studies Association (OSA), a scholarly organization based in the U.S., has made an urgent appeal to U.S. Secretary of State John Kerry.

Referencing massive human rights violations, denial of citizens’ constitutional rights, and the suppression of freedom of speech, press, and religion, OSA’s appeal letter calls on Kerry to press the Ethiopian authorities for “unconditional release of all political prisoners” – many of whom are imprisoned merely for being Oromo and some sentenced to death, according to the OSA.

“Don’t let the Ethiopian authorities try to fool you by telling you the usual lie that “‘there are no political prisoners in Ethiopia,’” the letter states. “Bekele Gerba, Olbana Lelisa, Mesfin Abebe, Eshetu Kitil, Wabe Haji, and tens of thousands [of] others are all political prisoners.”

The ongoing social media campaign is an effort to generate more awareness about the country’s bleak press records, according to the organizers. Ethiopia’s constitution, which in theory provides guarantees for civil liberties including freedoms of expression and assembly, is rarely applied.

*Dharra Budicha is a contributing editor at OPride.com and a student at Simon Fraser University. You can follow her on Twitter: https://twitter.com/dbudicha