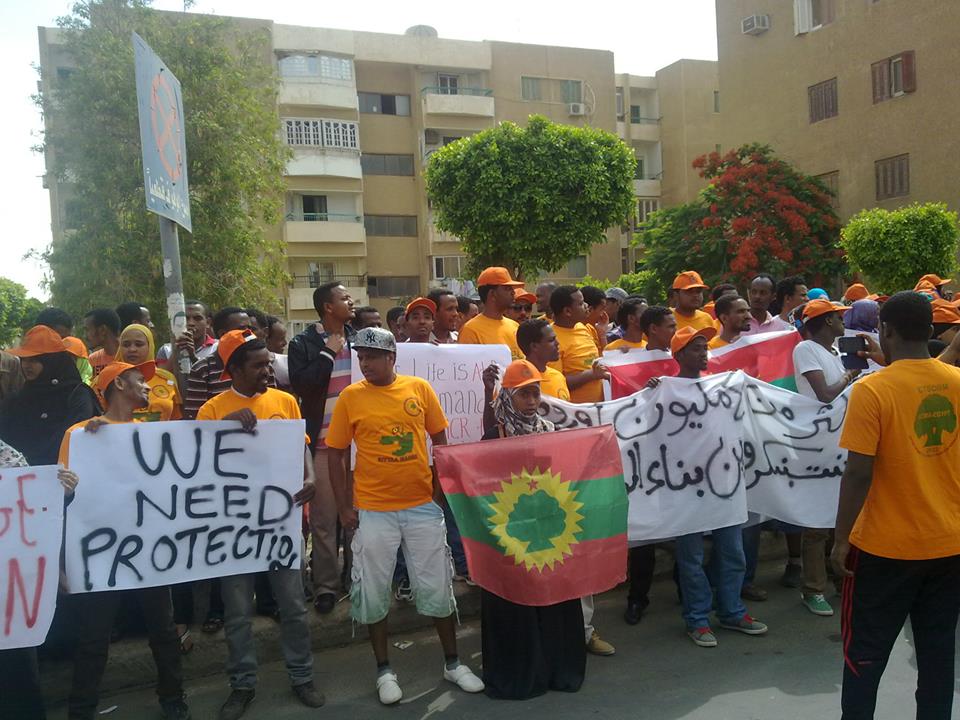 In response to increasing xenophobic attacks by Egyptian nationals, the United Oromo Refugees in Egypt held protests in front of UNHCR regional office in Cairo all week. The UNHCR on Tuesday appealed to Egyptian authorities to provide better protection for the refugees. The protesters camped outside UNHCR office for seventh day on Friday demanding better protections from the UN-body and Egyptian authorities.

The protesters sought to distinguish themselves from the Ethiopian government by saying that they are refugees who runaway from ethnic and political persecution. Their chants, “We are Oromo, not Ethiopians,” have angered Ethiopian bloggers some calling the protesters pro-OLF while others referred to them as terrorists and fifth columnists.

It is important that bloggers and independent journalists focus on the main thing in order to contribute to the de-escalation of the Egyptian-Ethiopian crisis. They also should raise awareness about the situation of refugees in Egypt. A lot of Egyptians have mobilized to welcome thousands of Syrians refugees. Several structures have been setup to meet the deep crisis we are experiencing. But we should not forget that a refugee is a refugee, regardless of their nationality, ethnicity, religion, gender, or skin color. As such, Ethiopians as well as all refugees hosted by Egypt should enjoy the same respect and should not be victimized, once again, in their country of asylum.

Meanwhile, in an appeal letter sent to UNHCR offices, the Oromo Studies Association president expressed grave concern over the fate of Oromo refugees in Egypt. Dr. Mosisa Aga recounted one of the incidents as follows,

On June 7, 2013 a group of Egyptians broke into an apartment of Oromo residents and attacked two men and a woman. The attacked Oromos said that the attackers live in the same apartment complex and know that they are refugees from Ethiopia. These Egyptians violently attacked these Oromo refugees by knife and Pepsi bottle to a point that the refugees lost their consciousness. They kicked the woman in her stomach, which was a five months pregnant, causing her a severe bleeding. Although she was later taken to a hospital by the help of other Oromo refugees, she was denied treatment at least from two hospitals after they identified their identity from their UNHCR ID card. These attacked refugees said that the attackers were telling them “we will cut your necks as your government has cut our water”.