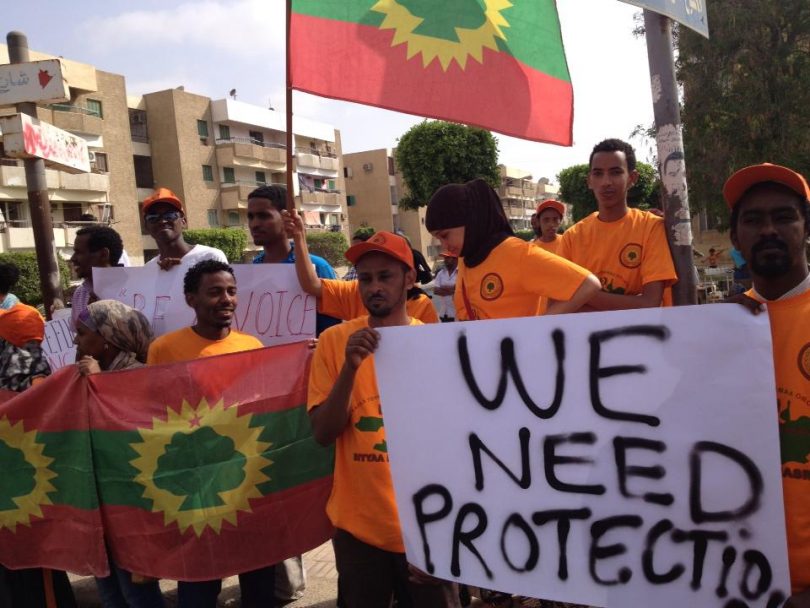 (OPride) – UNHCR is planning to temporarily relocate Oromo refugees to a safer neighborhood within Cairo from their current residences, activists said. Oromo refugees in Egypt have been camping outside the UNHCR regional office for over two weeks demanding physical protection amid anti-Ethiopia backlash over the Nile dam stalemate.

“We need home…we need safety…we will remain on these streets until our voices are heard and our rights are respected,” a few dozen refugees sitting on streets outside the UNHCR office chanted on sunday marking the start of third week of their protests.

Amid deteriorating camp conditions and health of the protesters, the UNHCR has secured about 70 housing units in a safer neighborhood, the activists said in an email message last night. Last week, Al Jazeera reported, the protesters were “sleeping on the grass outside…near leaking sewage from a surrounding apartment complex.”

So far, around 70 housing units have been found, we hope that families could start to settle down before the end of the week. #Egypt#oromo

Sporadic attack from angry Egyptian youth, denial of medical services, and the eviction of some of the refugees from residences triggered the protests early in June. A UNHCR official in Cairo expressed concerns and called on Egyptian public opinion to distinguish refugees from government actions, in a statement last week. The protesters say they are refugees who are forced to flee their country due political and ethnic persecution.

Oromo are Ethiopia’s largest ethnic group, over 40 million by some estimates. However, despite their numerical majority, the Oromo remain highly marginalized and constitute the majority of refugees from Ethiopia.

back to Cairo office from Salloum refugee camp. I will tweet about Salloum. Ethiopians’ sit-in continues for 3rd week. #Egypt

Effort is made and in process to find short term solution for Oromo refugees, housing team working to relocate oromos in 6th october city,

I paid them a quick viisit this afternoon. They looked so tired. They want the protest comes to an end. #oromo#refugees protest #Egypt

They are frighetened to go home. But they are also frightened to be outside in the park and try to stay together. #oromos protests #Egypt

Efforts are made to find housing for those who were evicted from their appartment in Maadi, and those who are too frightened 2 go back there

We keep hope that the #oromo protest will be ended by the end of the week. Camp Conditions are deteriorating, they may face more health pb

The main reason for the protest is the lack of safety for #oromo#refugees in #Egypt. Some of them have been evicted from their appartment

To solve this crisis situation, social workers have worked hard to relocate a lot of Oromos families out of their area of habitual residence