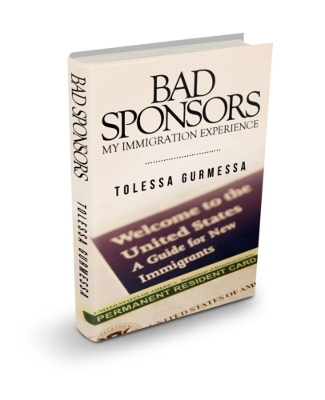 (OPride) – Why do people still come to America?

Even with a broken immigration system and a sluggish economy, the United States still holds promise of a better life for immigrants from around the world. Each year, thousands make the often-treacherous journey sometimes by sea and then across land to reach America’s shores. Upon arrival, many take menial jobs, laying as low as possible to avoid being detected by immigration authorities and yanked away for deportation.

In ‘Bad Sponsors: My Immigration Experience,‘ Tolessa Gurmessa recounts a harrowing struggle to finance his “once-in-a-lifetime” travel to the U.S. through a sham marriage, as well as the many challenges he faced States side once he arrived.

Recounted in a plain conversational style – often the author talking to himself out of frustrations – Bad Sponsors is a story of betrayal, love and hate, deferred dreams, and Gurmessa’s determination to succeed against all odds. This brutally honest book is an account of his troubled journey to realize a long held dream of becoming a doctor. It is also full of Gurmessa’s personal opinions about wide ranging topics from domestic U.S. politics to America’s foreign policy in the Horn of Africa.

“The book is an emotional catharsis,” Gurmessa said in a June 15 email.

And yet so much more.

Gurmessa’s story begins at Jimma University Medical School, a public university located in the historic Jimma city in the Oromia region about 190 miles southwest of Addis Ababa, Ethiopia’s capital. While completing a required medical internship at Jimma Hospital, Gurmessa won the Diversity Immigrant Visa (DV) – a Green Card lottery program available to 55,000 people annually from countries across the globe with low rates of immigration to the U.S.

The U.S. State Department says it received more than 12 million entries for the DV lottery program for DV 2013. “Approximately 3,500 visas were issued to qualified Ethiopians through the DV program [for DV 2013], the maximum number allowed worldwide,” according to the U.S. Embassy in Addis Ababa.

More than 1.4 million Ethiopians submitted their entries for the golden ticket between 2007 and 2010, according to data from the State Department. 40,000 Ethiopians have been granted the visa since 2003, when Gurmessa won his.

However, for the majority of Ethiopians looking to get out of the country (for a variety of reasons), winning the DV lottery is just the first step. According to official statistics, 28 percent of Ethiopia’s population is youth between the ages of 15-29. With per capita income of $370 – well below the $1,257 regional average – and fifty percent urban youth unemployment, financing a travel to the U.S. and finding an American sponsor are often the most difficult hurdles.

For Gurmessa, winning the lottery itself was a miracle. He filed his application for the coveted lottery on a form he copied-by-hand from a friend’s original application because he could not “afford to buy” it from the local post office.

When Gurmessa first learned through a friend that he had just won the lottery, he dismissed it as a practical joke and went to a scheduled medical briefing at his internship. Gurmessa then spent nearly a year trying to secure enough money for his trip – but came up short.

His problem? He did not want to finance his trip through a rather profitable sham marriage. He dismissed his friends cajoling to take as much as 70,000 birr – enough to pay off broker fees, finance his trip, and even build a house for his mother at the time. He refused.

Gurmessa thought luck was on his side when he met a beautiful girl from a well-to-do family through a friend. Later they decided to get married – in what Gurmessa understood as a real marriage.

The rest of the story revolves around a profound sense of betrayal from his “in-laws” recounted in riveting detail. After a warm welcome both in Addis at his fiance’s parents house and another welcome party in Washington, D.C. at her brother’s home, things unraveled fast. On the very first night he came to America, Gurmessa, once a respected medical student, was told to sleep outside on a patio by his “brother-in-law.” His wife was given her own room at the same place.

Gurmessa knew no one to turn to and had nowhere to go.

Although devastated by the unfortunate turn of events, camping out on a patio in a foreign land, Gurmessa focused on getting his green card (expected in three weeks from the day of arrival) to head back to Jimma University in order finish his internship. The internship, which he interrupted to come to the U.S., was the only thing standing in a way of him becoming an M.D.

But there was another problem.

Gurmessa’s legal sponsor, who at the time of application lived in Georgia, moved out to Florida – without filing a change of address with the U.S. Immigration. His green card mail bounced, threatening to end Gurmessa’s lifelong dream. Then he became homeless.

In the remaining pages of the book, Gurmessa’s trials working as a clerk at a gas station in Washington, D.C., military training in the rugged terrains of Kentucky and the plains of Texas, and yet another short-lived marriage in Utah unfold. Through it all, Gurmessa’s disappointment in his sponsors vividly comes to life. Despite his “in-laws” nasty betrayal, Gurmessa found mentors and generous friends along the way, which restored his faith in humanity and America.

Bad Sponsors is also full of quirky stereotypes about people who move to the U.S. In one instance, Gurmessa mocks his inability to gain weight: “People who move to America often get a little heavy, but it did not work on me, and I even went out of my way to get all the burgers I could afford.”

Midway through Bad Sponsors, the reader is treated to Gurmessa’s ruminations on politics, diaspora, faith, racial discrimination, etc. For example, Gurmessa writes about seeing his own close friends gunned down or harassed by Ethiopian security forces merely for being Oromo and asking for a dignified existence. He also has pretty damning things to say about diaspora-based Ethiopian opposition groups – particularly the Oromo Liberation Front.

There are a number of books by Oromo writers (and about Oromo people) but very few memoirs. Hence, why Gurmessa’s decision to write a memoir is highly commendable. He explains the thoughts that went into writing the book: “I am not naïve to the fact that memoirists typically are famous people with a wealth of accomplishments and credentials who are often asked to write about their lives.”

“That does not mean a regular Joe has no story to tell.”

Bad Sponsors is available on Amazon as an eBook: http://www.amazon.com/Bad-Sponsors-ebook/dp/B00DCJ0M8Q