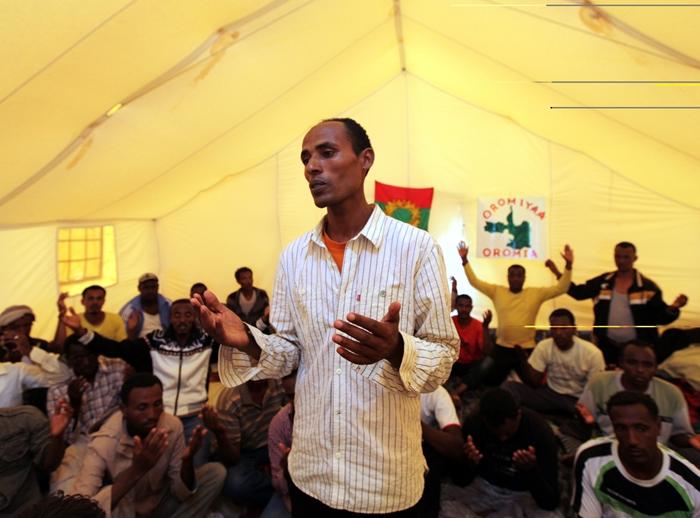 (OPride) – Oromo rights advocates and Ethiopian activists quarreled over Al Jazeera’s decision to address the plight of Oromo people during its flagship social media show, The Stream earlier this week.

The network’s announcement of the show, “Oromo seek justice in Ethiopia” on Monday evening drew a lot of applause, opposition, accusations, counter accusations, and denouncements on various social media networks.

Those who opposed the show questioned its timing amid Ethio-Egypt stalemate over the Nile; outright suggested that the Al Jazeera network was pulling for Egypt; decried that singling out the plight of Oromo foments ethnic division and violates Ethiopia’s sovereignty; and the list of accusations go on ad hominem.

On the other hand, Oromo activists welcomed the network’s decision to highlight their people’s untold story of injustice, historical and systematic marginalization, and their legitimate quest for self-determination.

The debate, while not new, continues even after the show in various forms, no less through a petition set up to demand official apology and explanation from Al Jazeera. However, even amid suffocating fear, suspicion, and attempts to silence the Oromo voice, the conversations generated are a testament to the fact that the plight of Oromo is not given due attention. Al Jazeera has barely scratched the surface.

It is important to note that on June 8 when journalist and OPride.com editor Mohammed Ademo pitched the story to Al Jazeera, even the Nigerian host Femi Oke had no prior knowledge about the Oromo. The notion that Al Jazeera was doing anti-Ethiopia PR for Egypt, when in fact the topic came from open editorial meeting with audiences, falls flat on its face.

Nevertheless, even for those who are familiar with the widespread refusal by most Ethiopians to acknowledge and discuss Oromo people’s continued plight, the outpouring of opposition to Al Jazeera’s coverage of Oromo people’s oppression was deeply disheartening and disturbing to witness.

As indicated above, Ethiopians gave many reasons for their protest against the show. Perhaps even more so for their fear and suspicion of the Oromo voice as a whole. Many resented the focus on the Oromo, citing that they are not the only ones being oppressed and persecuted in Ethiopia. For others, the focus on Oromo was simply seen as an issue meant to divide the country. Still many more dismissed the Oromo struggle as a “tribal” and narrow issue that “overstates” or dwells too much on past historical injustices.

Besides these spoken reasons given to oppose the show, the revelation of Ethiopians’ deep seated fear and repulsion of Oromo demands was troubling even for the most “moderate” Oromos. The recent controversies demonstrate that both ruling party supporters and other Ethiopianist activists, including diehard regime detractors, stood united against Oromo struggle for autonomy, justice and equality. The basis for their unity being fear and hatred developed over centuries.

“In Ethiopia today, as we speak, every dissenting Oromo is taken as OLF, by extension a terrorist,” said Ademo during the show on AJStream.  In fact, those who protested the show were quick to denounce the panelists as OLF cheerleaders – underscoring just how systematic and structural the abuse of Oromo dissent is in Ethiopia.

Oromos are not the only ones suffering, many Ethiopians protested. What proponents of this argument failed to see was that the Oromo do not claim that they are the only ones suffering. Rather, many Oromo activists sought to demonstrate that the suffering of Oromo people within Ethiopia is neither new nor would it be solved by a simple change of regimes.  Secondly, discussion of Oromo people’s suffering does not negate other’s persecution in Ethiopia. After all, if we follow the logic of the opponents, the normal and acceptable discussion should have followed in a way that oppression of Oromo would easily extend the discourse of how other nations within Ethiopia remain subjugated by Abyssinian ruling elite. This is the basic point they miss by failing to see the uniqueness of Oromo demands.

Ethiopianists refuse to acknowledge Oromo persecution because they know doing so entails 1) recognizing the just cause of Oromo people, 2) their right to self-determination. These responses are symptomatic of widespread resistance on part of Ethiopians whenever Oromos discuss their plight. They tell us, yes, Oromos have suffered, but Ethiopians need to heal, usually without even acknowledging the need for aggressive deconstruction of oppressing and dehumanizing past events which have a direct bearing on the present and the future.  In this case, healing Ethiopia requires silencing the voices of the victims and the oppressed, hiding the shocking stories of gross and systematic human rights violations that have been committed against Oromos for the last century. This clearly shows a deeply embedded unwillingness to talk about the structural and systematic violence that continue to be committed against Oromo people by the Ethiopian State and its successive authoritarian regimes.

By accusing Oromo activists of overstating the magnitude of past injustices, Ethiopianists also demonstrated their grave misunderstanding of Oromo struggle.  It is historical truth that the commission of systematic and structural violence against Oromo people did not begin with EPRDF, Ethiopia’s incumbent party. Nor can it be solved by simply changing this or that regime. Oromo struggle is against a system that keeps them politically, economically and socially denigrated, exploited, marginalized, and dominated. This requires dismantling of the entire system which has been built for the last century, predicated on the exclusion and exploitation of the Oromo people. This is why while Oromo people must resist the oppressive minority dictatorial regime; they must also fight against the old system upon which EPRDF has made its home

Even more troubling is the fact that whenever an Oromo speaks about gross human rights violations and systematic violence, northerners and the dominant political elite   freak out about the death of the Ethiopian State. This says a lot about their unwillingness to have an honest look at “their beloved” country. It is hard to understand how Ethiopianists love Ethiopia and its peoples,  as they claim all the time, yet willfully dismiss the plight of almost half of the country’s population as “narrow tribal”  problems that should not be addressed on any international forum or media networks.  The systematic and structural violence committed against a large segment of the population does not amount to a “narrow” focus by any rational calculation. The rush to denounce “ethnicity” as the primary ill facing Ethiopia, a country supposedly based on ethnic federalism, only shows the fear of Oromo is becoming more pervasive, powerful and blinding.

1. Ethiopianists continue to see themselves as “keepers” of the Ethiopian State. Whether Oromos, Ogadenis, Anuaks, Sidamas, and others want to be kept or not, they do not care. Ethiopianists still cannot begin to imagine a world where Oromos decide what they want.  They are far too invested in maintaining a system of violence and domination to ever listen to concerns of Oromo and other oppressed or marginalized groups in Ethiopia.

2. Narrow Ethiopian unity narrative reigns supreme – it is the law of the land and the people. Even those who present themselves as “liberals” seem unable to move past the same old patronizing, silencing, and tiring Ethiopian unity narrative based on domination. Ethiopians do not want Oromo stories told, unless it is told in ways that affirm the sanctity of Abyssinian supremacy and legitimacy.

3.  Given past and current socio political situations, it is hard to imagine when Ethiopianists will accept a world where Oromo people live in equality with them and others. Why would they be vehemently set on dictating what the Oromo should want, and how they should get it? If Ethiopianists believe that  Oromos are equal and are capable of making the right decision for and by themselves, why are they so hell bent on telling the Oromos  what is good for them  and what they should do to get what they have dictated the Oromo need?

4. Ethiopianists are still not ready to hear assertive and participatory Oromo voices. The very opposition of mainstream Ethiopians against Oromo story being told speaks a lot about the Oromo struggle itself. It is a struggle of a people who continue to be denied recognition in its fullest sense.

5. One of the questions posed online by Al Jazeera stream is “What do the Oromo people want? An independent Oromia state or autonomy within Ethiopia?” It is clear that Ethiopianists are not ready for either option. Unfortunately, Oromos cannot wait until they update their archaic and oppressive perceptions of themselves and others.

6. Overthrowing a system based on domination and violence calls for a stronger and more robust Oromo unity. This requires Oromos to work harder at dismantling divisive strategies that have been employed against Oromo unity to maintain an oppressive system on life support.  Appeasing Ethiopianists who refuse to recognize the humanity of Oromos can no longer be a winning strategy for Oromo liberation advocates. Liberation cannot be obtained by conceding a people’s identity and its very being. In fact, that is the worst kind of subjugation.

7.  Oromo-Phobia is alive and kicking. It is getting stronger than ever. Oromo people, and in particular leaders and activists must devise strategies to address this damaging fear.

8. Even amidst tactical differences on the way forward, Oromos, young and old, are united on one thing: the need for the realization of their right to self-determination. Antagonizing Oromo voice and attacking Oromo nationalism will only solidify the people’s unity and the future prospect of their victory. It would be wise for those concerned about the future, and dare I say survival, of Ethiopia to start listening, asking questions, learning about, and supporting the Oromo struggle.

*Ayantu Tibeso is a communications consultant and researcher based in North America.

Cover photo courtesy of Al Jazeera. Some things are better said by the speaker that uttered them. Ademo has collected some of the reactions as follows.