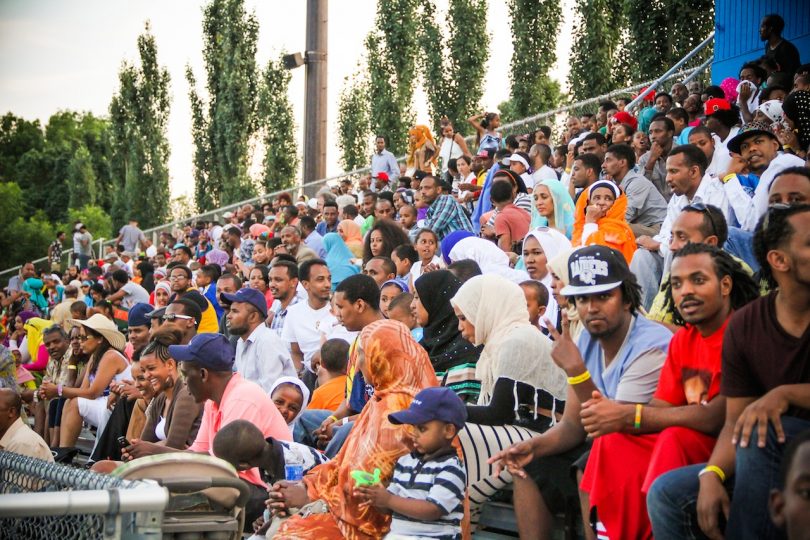 (OPride) – The Twin Cities, home to the “largest gathering of Oromo outside of Africa,” according to a report in the Twin Cities Daily Planet, hosted a plethora of summer events this week.

The 2013 North American Oromo Festival officially kicked off with a proclamation by Twin Cities’ mayors, Chris Coleman and R.T. Rybak, who established June 29 to July 6, 2013 as “Oromo Week.” Oromos from far and near are gathered in Minnesota, Little Oromia as they call it, for a soccer tournament, musical performances, Miss Oromo Beauty Pageant, and conferences.

Organizers said at least 450 to 500 people attended Ali Birra’s milestone event at Ramada Plaza in Minneapolis. “Ali Birra sang so many love songs; now he is our love song,” said Dr. Gemechu Megersa in his keynote address. Megersa and Birra have been friends for 42 years, according to tweets by Ayantu Tibeso.

OSFNA Soccer Tournament
The 17th Annual Oromo Sports Federation in North America soccer matches have been more competitive than previous years, according to eyewitness accounts. Sixteen teams from across the U.S. backed by their raucous fans faced off at Washburn High School. The events were festive, well organized and largely well attended.

However, many soccer fans also experienced disappointments. Two-time defending champions, Oromia 11 Starts, exited the match before the semifinals. The most heart wrenching game of the week was yesterday’s qualifying match between Ten Thousand Lakes (TTL) and Utta Wayyuu (UW). Nevertheless, at the start of the game players from both teams locked hands to signify unity and sportsmanship as well as to thank their dedicated fans.

Once the match began, TTL’s young squad maintained a comfortable lead of two to nil until the 80th minute. UW’s experienced players looked desperate at times but determined to bag the win. The game was tied minutes before the final whistle. The two teams could not break the tie with additional time. UW advanced to semifinals after a penalty shootout, leaving many a TTL fan tearful and frustrated with the refereeing.

Here’s a suspenseful live-tweet of that match:

The semifinal is expected to be even more hard-fought. Seattle’s Madda Walaabu (MW) will take on Minnesota’s Uttaa Wayyuu, while Dire Dawa faces Oromo United (OU) this evening. All eyes are on OU’s Fuad Ibrahim, who earlier this year made his debut in South Africa during Team Ethiopia’s historic participation in Africa Cup of Nations, as well as on MW’s Abdul Aman (Zigla) who also trained with Team Ethiopia. The Seattle Sounders Major League Soccer team drafted Zigla as a striker in 2012. During their encounter earlier in the week Zigla’s MW beat OU 2-0.

Many of you responded: