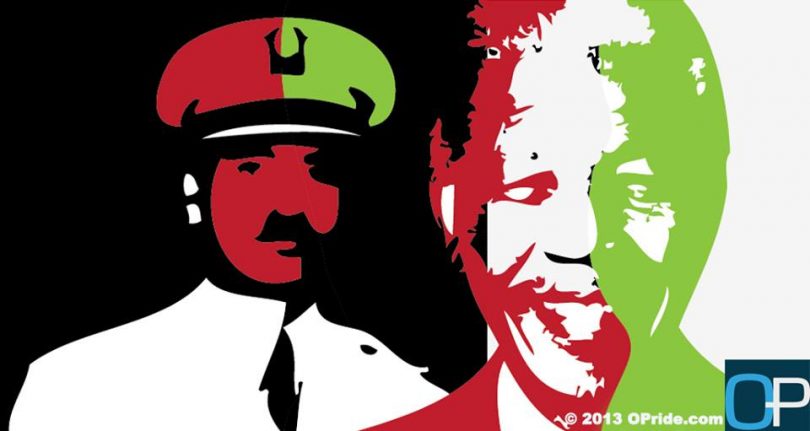 (OPride) – On July 18, 2013, South Africans and people across the world celebrated Nelson Mandela’s 95th birthday as he recovers in Pretoria hospital.

Since the United Nations ratified Nelson Mandela International Day as a day of service in 2009, once a year, on his birthday, people around the world make conscious efforts to embody the values and visions of this iconic figure that has become a touchstone of moral capital. On Thursday, citizens’ from the UN headquarters in New York to Pretoria, from Toronto and Boston to Nairobi, and even the International Space Station, commemorated the life and struggle of this exemplary figure in South Africa’s ‘long walk to freedom’.

Nelson Mandela is both a name and a sign. It is a name of a wise and kind leader, a noble laureate, and an honorary citizen of several countries, a man whose image represents a source of stability and co-existence. But most importantly, ‘Nelson Mandela’ is a sign and a signifier that even his detractors find it difficult to contradict. This sign transcends Mandela the man, the husband and the father.

Nelson Mandela is a signifier that gives a moral meaning and purpose to his people and many across the world. His legacy is preserved as a sign engraved into concrete architectures (streets, squares, bridges, and of course statues), and institutions (foundations, charities, museums) and commemorative items (monetary notes, gold coins, memoires and biographies). He is an embodiment of the values of the liberation struggle that set the standard for South Africa as a nation. He not only represents what is best in Africa but also encapsulates the best of humanity. But this Mandela has become a depoliticized figure, one of the few black saints in the same league with Martin Luther King, as opposed to, for example, Steve Biko and Malcolm X. The Mandela that walked tall from his cell after 27 years of thinking and reflection has also spent 40 years of his life fighting for the dignity and humanity of his people.

On June 21, 2013, I had the honor of visiting Liliesleaf, Rivonia, where several high-ranking members of the African National Congress (ANC) including Mandela were arrested and sentenced to life imprisonment after what is known as the Rivonia Trial. It is here that Mandela set up the ANC’s armed wing Umkuhonto we Sizwe (Spear of the Nation) and formulated its military strategy. Fifty years later, Liliesleaf is a site of memory – it is no longer referred to as a site of sabotage and terrorism, it is officially called ‘Liliesleaf—a place of liberation’. An award winningnational heritage site and a resource center, Liliesleaf dramatizes and enacts events that took place under South Africa apartheid system.

But there is one thing that particularly captured my imagination –a story of the first weapon in the struggle against that racist and unjust order. As I quietly walked through the state-of-the-art facility, snapping as many photos as I could, I randomly pressed a button underneath a monitor. It was the story of a mysterious pistol given to Nelson Mandela as a gift by Ethiopian Colonel Taddesse Birru in the early 1960s.

South African journalist and Mandela’s friend, Allister Sparks, told the Telegraph in 2011, “the gift had meant a great deal to the freedom fighter” who later became a symbol of liberation and freedom throughout the world. The yet to be found mysterious pistol is seen in South Africa as a national treasure estimated to be worth 22m rand (1.9m GBP). While the pistol is ‘essentially symbolic’, Allister notes, its symbolism is a result of its uniqueness as ‘Umkhonot we Sizwe’s first weapon’.

But Tadesse gave Mandela more than just a pistol – a military training that has become the basis for the ANC’s armed wing, Umkhonto we Sizwe (Spear of the Nation). While this history is largely erased from mainstream discourse about South Africa’s struggle, as is indeed Mandela’s revolutionary legacy, Liliesleaf is one such place where the contribution of an Oromo freedom fighter is being celebrated. While South Africa has become the state of its own people, Ethiopia has grown so oppressive as to deploy certain aspects of the very strategies and tactics used by Apartheid South Africa to eliminate the likes of Nelson Mandela.

While political repression is ubiquitous, the Oromo, Ethiopia’s single largest ethnic group, are particularly singled out as targets of Apartheid style legal persecution. The trial and conviction of Bekele Garba and Olbana Lelisa under terrorism charges is the latest in high profile proceedings against Oromo opposition party leaders and activists. 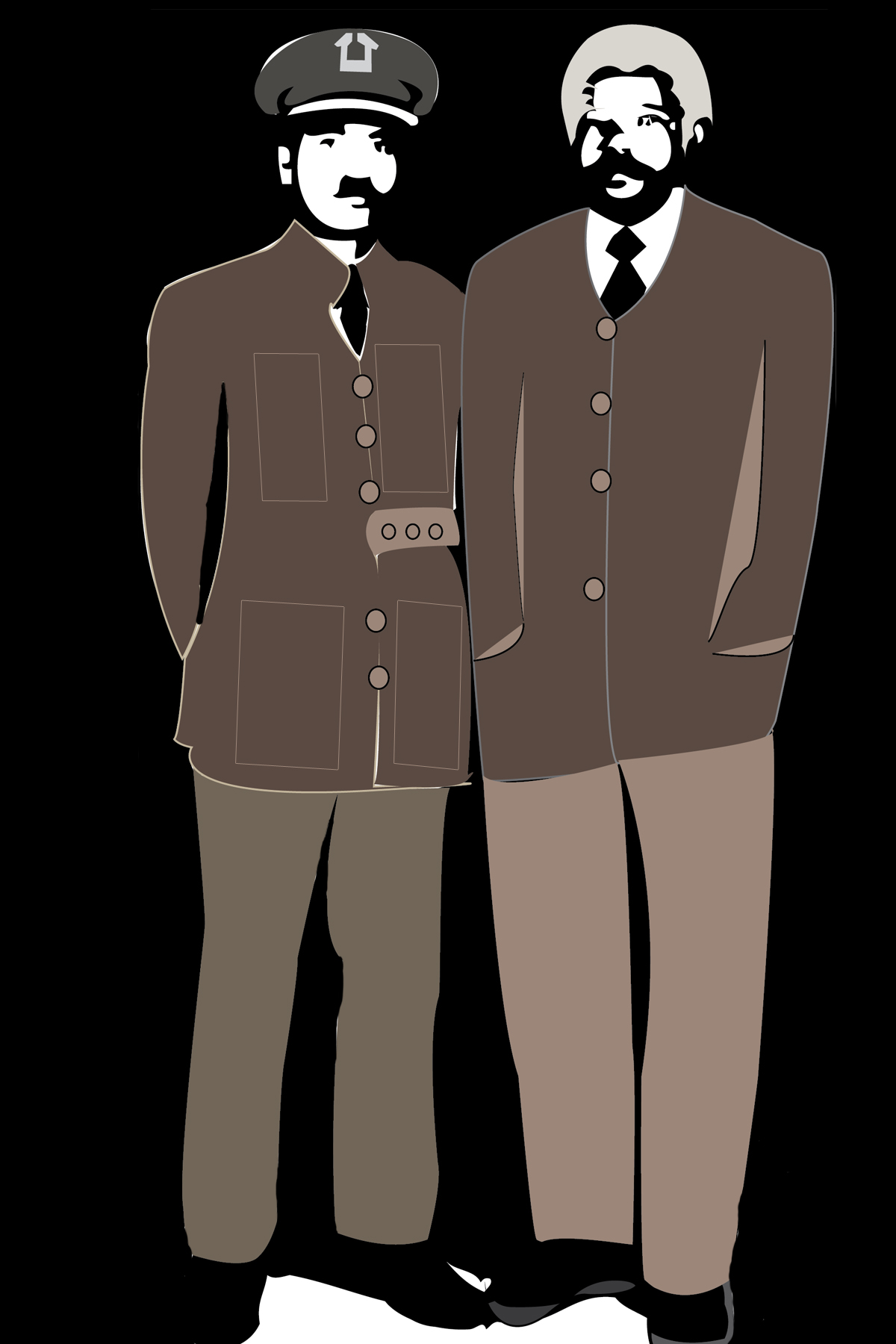 Just like Apartheid South Africa strategically mobilized the containment of communism to delegitimize and eliminate men of exemplary courage and sacrifice during the liberation struggle, Ethiopia is using the fight against terrorism against the same kind of people, for the same purpose, and with the same effect. Like Apartheid South Africa, the regime in Ethiopia understands the shudders these terms send to its American and European allies the moment one is accused of these crimes.

Ironically, some of those who are now busy celebrating Mandela Day are the same nations that denounced freedom fighters of Mandela’s stature as ‘terrorists’. For instance, U.S. President Ronald Regan went one step further publicly reaffirming his support for Apartheid South Africa, as “a country that stood with us in every war we ever fought, a country that is strategically essential to the free world’s production of mineral”. Margaret Thatcher called the ANC ‘a typical terrorist organization’ and Mandela a ‘terrorist’, adding, ‘Anyone who thinks it is going to run the government in South Africa is living in cloud-cuckoo land’.

Law and Justice in Ethiopia Today and Apartheid South Africa

Let me make myself as clear as I can: I am not drawing a parallel between Ethiopia today and Apartheid South Africa. I am interested in a very specific logic and rationality that the two-system share: the deployment of law and institutions of justice against legitimate political adversaries. And in both cases, the strategy is both local and global. With the complicity of a superpower that prides itself as a champion of democracy and human rights, Ethiopia cynically and blatantly usurps constitutionally guaranteed rights and freedoms. What makes this violent repression even more repulsive and infectious is the fact that it is being done in the name of the law, before courts, and with the language of justice, just like Apartheid South Africa did. Nothing is more politically productive than repression in the name of the most concealing and neutralizing of instruments –the law.

The irony, however, is that not even in an openly authoritarian system such as Apartheid South Africa has justice and the rule of law become so farcical as to defy comprehension. In fact, if justice is an enterprise that can be abstracted from its totality and judged in its singularity, it is safe to argue that the scales of justice in Apartheid courts is more evenly tipped than their Ethiopian counterparts. 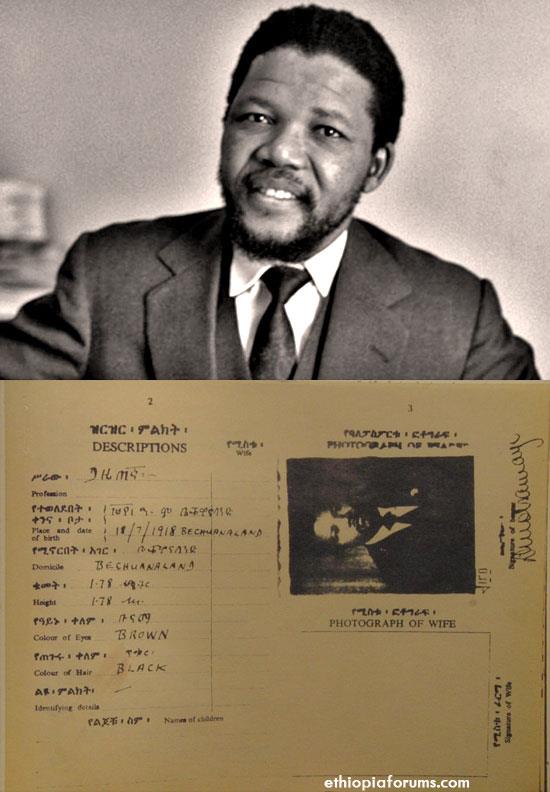 With all the distinction that applies, Apartheid courts often upheld formal legality, and resisted state interference in their domain including in high profile trials. While Apartheid courts enforced repressive legislations, they acted, to the most part, within the framework of that racist constitutional order and resisted direct government intervention in their domain. In the Treason Trial, the court acquitted most of the defendants including Mandela after a lengthy trial. In the Rivonia Trial, Justice De Wet upheld Mandela’s right to contest his accusers despite the government’s determined attempt to mute him and his co-defendants.

On the contrary, Ethiopian courts have allowed the government a free reign to use them as technologies of oppression that conceal and rationalize its repressive logic under the guise of law and legality. In a country constitutionally committed to “building a political community founded on the rule of law and capable of . . . guaranteeing a democratic order”, the courts participated in perpetuating the government’s excessive abuse of power and its endless contempt for the Constitution.

Notwithstanding its fundamentally oppressive character, Apartheid courts were not as arbitrary as their Ethiopian counterparts. As most observers of that system testify, “the [judicial] enforcement of racial inequality [under Apartheid South Africa] is not tantamount to arbitrariness” of the sort that is so ubiquitous in Ethiopia.

One of the defense lawyers at the Rivonia Trial, Joel Goffe, wrote the following about the integrity and independence of the presiding Judge: “I do not believe Mr. Justice de Wet took or would take instructions from anybody, nor do I account for his behavior by the popular idea that he was ‘told’. He was a rather arrogant man, proud of his position as judge and of the family tradition . . . an obstinate and self-willed man, who would not, I think, have taken kindly to either direct government or even indirect political intervention in his domain.”

But the ultimate proof of this is Nelson Mandela himself. In hisautobiography, ‘Long Walk to Freedom’, Mandela notes, “The court system, however, was, perhaps the only place in South Africa where an African could possibly receive a fair hearing and where the rule of law might still apply.”

Like Mandela, Col. Tadesse Birru was first tried, condemned to life in prison, and subsequently reprieved by Haile Selassie’s autocratic regime. The Dergue later rearrested and executed him in March of 1975 for no apparent crime than struggling for the dignity and freedom of Oromo people in Ethiopia.


*The author, Awol K Allo, is the Lord Kelvin Adam Smith scholar at the University of Glasgow Law School, UK. Previously, he was a lecturer in law at St Mary’s University College, Addis Ababa, Ethiopia.