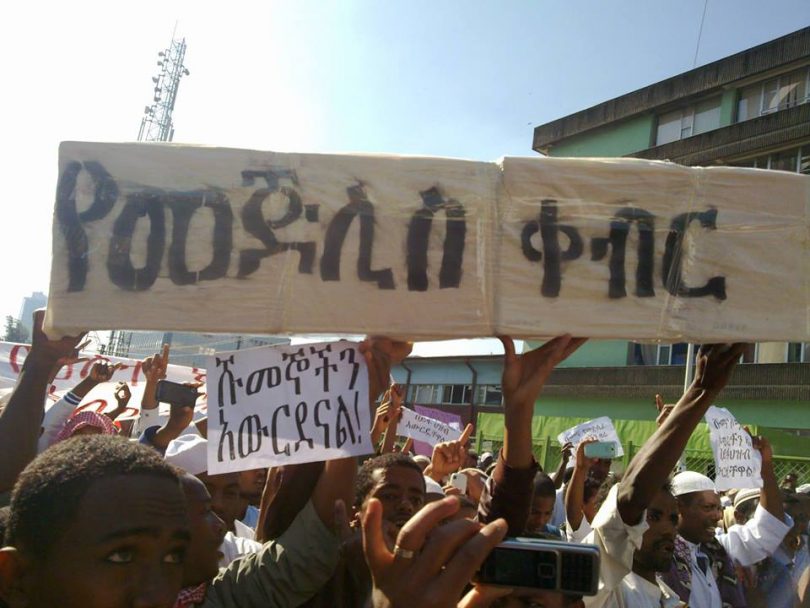 Police began rounding up peaceful protesters returning home near the Ministry of Justice in Addis Ababa shortly after the Eid prayers concluded at the national stadium, according to  eyewitness reports on Twitter. Those detained inside the Ministry’s compound were ordered to sit on the ground, the reports said. Early Thursday morning, many complained about being roughed up on their way to the overflown prayer sites.

Ethiopia’s capital, Addis Ababa, remained tense all week with heavy military and riot police presence leading up to end of Ramadan celebrations. The latest protests are part of a two-year-old peaceful campaign by the Muslim community, who make up about a third of Ethiopia’s 93 million population, against government interference in religious affairs and to demand the release of jailed Muslim rights advocates. A key U.S. ally in the Horn of Africa, Ethiopia denies interfering in religious affairs and says its largely Sufi Muslims are being radicalized.

The state-run Ethiopian Television, ETV, on Thursday cut its live coverage of the Eid ceremony abruptly as the prayers concluded at Addis Ababa Stadium in the capital before the faithful broke into denunciations of the government’s actions. Before Salat-ul-Eid began, Mejlis leaders, which the protesters say are handipicked by the government, and a representative from the city’s Mayor office made subtle political statements. At the end of the Eid prayer, activists can be heard chanting “Allah Akbar” in the background – forcing ETV to quickly switch its feeds back to headquarters for hourly news. ETV then reported the Eid celebrations were orderly and worshipers returned to their homes peacefully.

In similar protests, police in the northern city of Dessie fired machine  guns and tear gas, indiscriminately beating the protesters, according to a Facebook post by activist group, Dimtsachin Yisema, the clandestine protest organizing body. During and after the Eid prayer, the group posted live updates including photos and videos, in Amharic, from various locations around the country.

Most of the updates touted the success of a nationwide anti-government demonstration focused on a call for the removal of Ethiopian Islamic
Affairs Supreme Council leaders, the Mejlis. “As of today, the illegally elected Mejlis leaders are dismissed by the public,” one banner posted
by the group read. Activists say the Ethiopian government appointed political operatives to the country’s highest Islamic body ignoring their demands.

The two-year-old protests began in 2011 after the government, through Mejlis, tried to impose an alien Muslim sect, Al-Ahbash. Police arrested 29 Muslim activists, including members of a committee elected by the protesters to arbitrate their grievances with the government, in July 2012 and later charged them under its sweeping anti-terrorism legislation.

Widespread crackdown and arrests were also reported in Awaday town, Eastern  Oromia, and Illu Abba Boora zone, in western Oromia on Eid day. In other towns like Dodola, West Arsi Zone of Oromia region, majority of the town’s Muslims boycotted the Eid prayers opting to pray in small groups at their homes. Federal police through the government mouthpiece ETV said the Eid-al-Fitr celebrations around the country were largely peaceful and acknowledged arresting an undisclosed number of what it called “extremists” in Addis Ababa. ETV also revised its initial reports to say “some arrests” were made.

listen to ‘Ethiopian Muslims celebrate Eid with protests’ on Audioboo

The arrest of Muslims in Ethiopia on Thursday came less than a week after police gunned down some 16 civilians and arrested hundreds in Kofele district , south-central Oromia. The “massacre” in Kofele last week was set off after police tried to arrest a local Imam in a nearby town of Wabe, according to eyewitness reports. When the Imam was whisked away by those gathered for morning prayers, police took his wife and children further angering the locals. Hours of confrontation between local Muslims and the police ended with the death of two civilians near the town of Totolamo.

The killings led to spontaneous protests in Kofele and other nearby towns, prompting the regional police to call for a backup from a special rapid force stationed in Awassa, the capital of southern nationalities region. In addition to the 16 “confirmed” deaths, local reports indicate at least 37 others were severely wounded, while hundreds remain incarcerated in makeshift prisons. Several prominent Muslim leaders have also gone into hiding due to fear of arrest. Most of the prisoners are now being moved to undisclosed locations overnight, locals said. There is heavily armed military presence in and around Kofele with a large contingent still stationed at two schools in the central Ethiopia town.

In a further blow to the government’s efforts to systematically takeover mosques, a succession battle has been brewing between the government appointed Mejlis representative in Kofele and the current office holder, Mr. Tibesso Gammachu. Gammachu refused to turn over power, the local office, and official seals after a disputed election last year of his successor. Gammachu’s wife remained incarcerated on Wednesday with two children one of whom is a year-old baby, according to a family member who now resides in North America.

The New York-based human rights group, Amnesty International USA, on Thursday called on the Ethiopian government to halt the arrest of peaceful protesters and to setup impartial investigation into the death of civilians in the Horn of Africa country. “The Ethiopian government’s ongoing repressive crackdown on freedom of speech and the right to peacefully protest has to end now,” said Claire Beston , Amnesty International’s Ethiopia researcher.

These reports of further deaths in the context of the Muslim protest movement are deeply worrying. There must be an immediate, independent and impartial investigation into the events in Kofele, as well as into the four incidents last year which resulted in the deaths and injuries of protesters.

*This report has been updated to reflect new information from Kofele, Dodola, and Addis Ababa since the publication of the breaking news story.