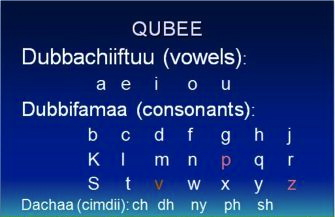 (OPride) – The Minneapolis Community and Technical College (MCTC) will be the first college in the U.S. to offer an Afaan Oromo course this September, the instructor said.

Adjunct Instructor Mathias Gudina will be teaching a two-level course, Afaan Oromo I and II, starting this fall to introduce students to one of the ancient and most widely spoken languages in Africa.

Considered the lingua franca of Ethiopia, Afaan Oromo, the language of Oromo people, is the third most widely spoken language in the continent, after Hausa and Arabic. In the Horn of Africa alone, there are over 45 million native Afaan Oromo speakers.

Beginning this September, MCTC students will be able to advance themselves in Afaan Oromo. “This introductory course series will teach you how to read, write and speak the Oromo language as well as master Qubee Afaan Oromoo (the Oromo alphabet),” reads the online course description.

The idea for teaching Afaan Oromo as one of several foreign language courses offered by the college came when associate Professor Kano Baja approached Gudina, a former language instructor, with a proposal.

Gudina then developed the lesson plan as part of the course offerings through the college’s Continuing Education Unit. Administrators reviewed the proposal and later approved it. Oromo I and II are introductory courses that will focus on teaching the Oromo alphabet Qubee ­­– adopted from Latin letters in 1991 – Afaan Oromo grammar, sentence structures, and conversations.

Gudina has taught Afaan Oromo since 1993 in Europe, Oromia, and the U.S. Most recently, in 2008, he taught introductory Afaan Oromo at Our Redeemer Oromo Evangelical Church in Minnesota.

“I wanted to take [the course] to higher education where there are more opportunities to use technology and a support system to deliver quality teaching,” Gudina said in an email response to OPride.

In Ethiopia, under emperor Haile Selassie’s rule, the use of Oromo language was widely prohibited, especially in schools, government offices, and the media. When the Dergue regime was overthrown by a coalition of Oromo and other rebel fighters in 1991, Ethiopia began to recognize other languages and nationalities within its borders.

The New Education and Training Policy allowed native languages to be established in school systems. Since 1994, Afaan Oromo is the official language of the Oromia region and is taught in both high schools and colleges.

In order to become a professional in Oromo linguistics, literature and language, colleges in Oromia region now offer a BA in Afaan Oromo. Addis Ababa University has a Post Graduate Program.

In a world where technology has established English as the dominant global language, preserving foreign languages or taking language courses are as culturally significant as ever. Cognizant of this significance, Oromo activists from around the world took to social media to celebrate the news last week when it first became public.