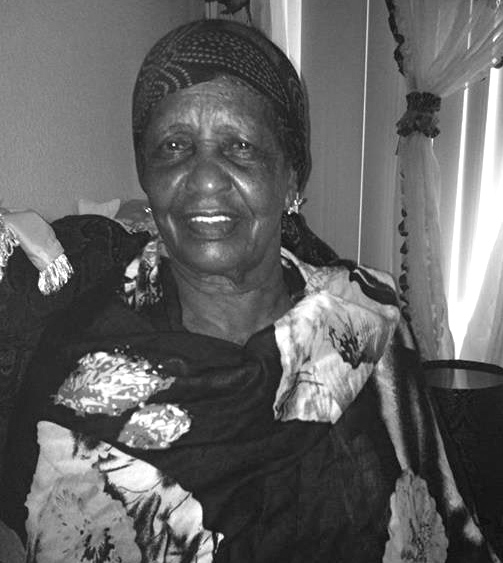 Makka — or as she is affectionately called Akkoo meaning grandmother in Oromo — is the oldest wife of the late Hajii Adam Jilo Webo, a prominent figure in the Oromo struggle for freedom. Webo died in exile in 2005 after decades of resistance against three Ethiopian regimes, including the current one.

Aayyoo Makka, who came to the U.S. in 2007, now lives with her grandson in Minneapolis, thousands of miles away from her homeland, which she profoundly misses. Born sometime in 1910s in the Bale zone of Oromia region, Akkoo spent her early childhood herding cattle when not tending to house chores. Like most women of her generation, Makka, who did not attend school, married Webo at an early age. She led a good and happy life amid her extended family network, since they had a lot of cows, camels, and goats – thanks to the abundance of grazing land in the area.

I spoke to Akkoo as part of upcoming plans to tell the untold stories of many unsung heroes and heroines in Oromo struggle during a commemoration of the 50th year anniversary of the onset of Oromo people’s armed resistance against Ethiopian tyranny.

“I never even told these stories,” said Makka as her face glowed and her voice sank. “Now, I am ready to use the rest of my life to tell them, if God willing, so that your generation will finish what your forefathers started a half century ago.”

In early 1960s, conflicts began to pile up over grazing land rights, unbearable taxation, land inheritance and classification, and religion between indigenous Oromo farmers and armed Abyssinian settlers in the Bale region. The Oromo were dispossessed and systematically impoverished while corrupt and incompetent Ethiopian elites expropriated their land. Estimated at over 40 million, the Oromo are Ethiopia’s single largest ethnic group.

Absent a democratic means to channel their grievances, a gallant son of Oromo, General Waqo Gutu Usu, began to clandestinely mobilize locals to check exploitations and repressions of the Ethiopian empire through a language the empire understood best – armed resistance. He subsequently went to Somalia and acquired military training and arms giving him some firepower. This movement, sometimes dubbed the Bale Oromo rebellion or uprising, paved the way for Oromo people’s ongoing quest for self-determination by putting up the first most serious challenge to the Ethiopian empire. Waqo and the movement he helped inspire remain the beacons of Oromo resistance. He died in exile in 2006.

During a recent visit, Makka told me her near-death ordeal in one of these battles, when Ethiopia’s mechanized army raided her village with dreadful war machines like jets and tanks – to “punish,” for once and all, mindless nomads, as the empire then pejoratively referred to a peasant army that confronted it with outdated rifles acquired from Somalia.

Makka vividly recalls a scene of mayhem during this battle when helicopters came making a reconnaissance and suddenly began bombing the villagers as they prudently tried to escape. “It was a little before Thuhur [the noon prayer] when we ran to the bushes grabbing only things that were at our sight as helicopters hovered over us to map the area and then jets came to unleash their death dealing weapons,” said Makka.

She serenely looked up at the sky, raised her hands to a level of her chest and said, “Galanni ka Rabbiti, hanga hardhaa ka na jiraachise” –Praise be to the Lord who let me live till this day.

“I took my two youngest kids and run as fast as I could into the bushes. The helicopters flew above us once to capture photos and then, returned to destroy whatever was captured,” said Makka as sadness took over her face. “I cuddled up the kids and laid on top of them to hide as the firings rattled the area.” Makka talked about one incident she still regrets as tears gushed down her cheeks. She remembers leaving behind a young woman who had given birth just few weeks before this date. The woman was later found dead hugging her child after the mayhem.

Makka said her survival was almost miraculous as bullets torn the trees around her. She remembers confused and terrified neighbors coming from their hideouts when the jets were gone. Some cried for their loved ones killed during the aerial bombardment while others began desperately searching for those missing. I was amazed by how the distant memories of trepidations and tribulations of a nonagenarian woman from a war torn country continues to prevail.

A series of battles during this period are famously known as Weeyra Dhombir – named after the assault rifle used by the Oromo fighters. The first battle took place at Malka Anna near Ganale River in 1963 – sowing the seeds of Oromo people’s armed resistance against the Ethiopian empire – and this year marks its 50th anniversary. To remember this landmark event, a celebration will be held at Saint Thomas University in Saint Paul, Minnesota on Oct. 20, 2013.

Makka never dreamt she would leave her country, let alone crossing an ocean to live in a country where she now finds herself a perfect stranger. Prior to her resettlement in the States, the only thing Makka heard about America was that Haile Selassie’s fearful military machines came from America, a country that humbly welcomed her family. Makka, who spent over a decade at a Kenyan refugee camp, highly appreciates the freedom she has in the U.S., even if adjusting to the American lifestyle has not always been so easy.

“Back home people knew their neighbors, and you’d go talk to them for hours,” she said comparing the two worlds during my visit on a recent Sunday afternoon. “Here, you don’t know your next door neighbor’s name. Even, if I do I can’t talk to them because I don’t speak English.”

Makka valued speaking in Afaan Oromo as we conversed in the Arsi dialect. Language remains one of her biggest challenges in the U.S. as she still struggles to speak English. She loves talking to younger kids but can’t always understand them, as many Oromo children born in the diaspora do not speak Afaan Oromo very well. Although she enjoys the luxury of her new life, Makka said, “Biyya teenna baay’ee yaade”— I miss my country so much.

Despite these challenges, Aayyoo Makka remains positive and jovial. She has strong spiritual and emotional connection to Oromia. She was delighted to see pictures from my recent trip to the homeland, including some of Mada Walabu, her place of birth. With most of her peers long rested, Makka hopes to visit home soon so as to ease her protracted homesickness and smell the scents of Oromia once more.

* The author, Abdullatif Dire, is a third-year Physiology student at the University of Minnesota Twin Cities. He’s the recipient of 2011 Gates Millennium Scholarship [OPride’s profile here]. He can be reached at aadire2015@gmail.com.