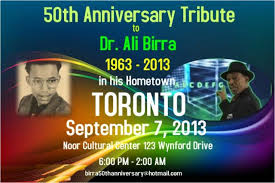 Last week’s musical tribute, the second this year, organized by Oda Relief Association of Toronto, Oromian- Canadian Society of Ottawa and Dirre-Oromos of Toronto was attended by more than 300 people.

“The night was kicked-off with a breathtaking moment welcoming the legendary artist entering the audience hall, accompanied by ladies dressed in Oromo cultural dresses, and the first ever song played by Dr. Ali Birra in 1963 ‘Biradha Barihe’ playing in the background,” the organizers reported.