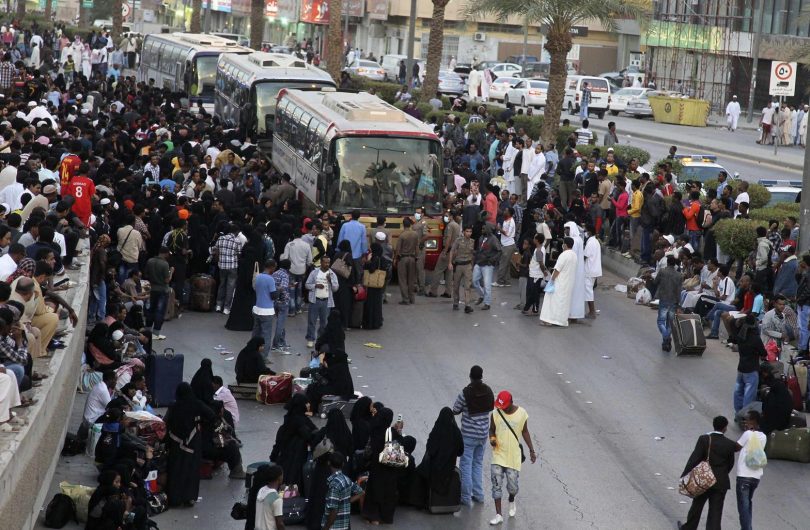 (OPride) – At least three Ethiopian citizens had been killed in Saudi Arabia and scores wounded following a visa-related crackdown that began last week.

On November 8, when police started the field security sweep, in a matter of hours, police rounded up hundreds of migrants who did not have “legitimate” residency papers.

The following day, at least two people, including a Saudi national, were killed in clashes between police, foreign workers, and vigilante Saudi citizens. Reports in the local media put the number of those arrested in thousands.

Ethiopia had called on Saudi authorities to investigate the death of its citizens. And it had reportedly sent a delegation to facilitate the repatriation of more than 17,000 Ethiopians now facing deportation.

The mistreatment of foreign workers in Gulf States, including Saudi Arabia, is not new. Alem Dechasa’s assault in 2012 in front of the Ethiopian consulate in Beirut infuriated many. A mobile video showing Dechasa being beaten by her captors went viral, shedding some light on the misery of more than 200,000 domestic Ethiopian workers in Lebanon.

Early in 2012, the deportation of 35 Ethiopian migrants, 29 of them women, from Saudi Arabia for practicing a ‘banned’ religion made international headlines. But the many unreported crimes perpetrated by police against these workers are extremely revolting. Women were raped and men tortured.

Ultimately, for those who cross wild seas and travel miles in the scorching desert of North Africa and Yemen to get to Saudi Arabia, life has less to offer. But for their smugglers who make thousands in a day, it’s a spring in the middle of desert. Lest we forget, the ongoing crackdown on migrants in Saudi Arabia is just a drop in the ocean compared to the thousands abused in the households of the wealthy Arabs and those who die when boats capsized even before they get there.

As we express our collective shock at the Saudis and even praise corrupt Ethiopian officials for posting updates on social media, let us also remember that Ethiopia’s unwillingness to protect its citizens from illegal human trafficking and create better opportunities at home is equally, if not more, culpable.

The ongoing Saudi police crackdown on foreign workers evoked bitter memories of my time in the Middle East studying Arabic. During my four-month stay in the region, I traveled to Oman, Dubai, and Turkey; transit hours ensured that I witness gruesome realities of human rights violations. I saw many familiar looking faces in the waiting areas desperately looking for help, often with no luck.

It’s hard to explain a complex country like Oman, much less based on a brief stay. The generosity of ordinary Omanis resonates across the country and the beauty of the desert landscape blew my imaginations. However, beneath this beautiful cosmos lies the sad and discomforting condition of domestic workers including those from Oromia, Ethiopia.

Despite the hullabaloo about its miraculous economic growth, Ethiopia’s pervasive youth unemployment, lack of economic and political freedom, differential access to government jobs, and the promise of a better life overseas are forcing hundreds of young people to take dangerous trips to the Gulf region every year. This has especially affected Oromos and other minority ethnic groups in Ethiopia. Half of the migrants in Saudi Arabia are believed to be Oromos.

Two of the three women who were stranded at the Muscat Airport for more than 48 hours in February were Oromos. One of them, a young girl from Assela said she was 20 but looked much younger. These women make up approximately 20,000 “Ethiopians” in Oman. On my return flight last April, over a hundred women were being returned to Ethiopia. A few that I approached spoke fluent Oromo. Few non-Oromos in Ethiopia speak the Oromo language.

The Saudis have repeatedly underlined that illegal workers are unwelcome, but instead instituted a sponsorship program that gives Saudi employers extensive control over their employees. The Ethiopian government, human traffickers, and the scrupulous broker agencies in Addis all ignored these repeated warnings. Desperate job applicants looking to escape from repression and dire poverty have also missed the signs. Despite volumes of reports by humanitarian agencies and accounts of survivors, the international community did not heed pleas to pressure Gulf States to reform their labor laws.

Stories of young girls eloping to Arabia in the hope of a better life are common. I met several girls, some as young as 12 years, wondering around airports in Oman and Dubai. If they knew the reality of the slavery like conditions in Gulf States, these teenagers would have toiled their fertile land and made life out of it. However, avid brokers and smugglers who thrive on the misery of these youngsters often mislead them into signing up.

Ethiopia is known for its notorious and unregulated recruitment agencies. But the allure of a better life abroad is also exacerbated by remittances sent home by expats abroad. The “success” stories of those who send money home by working as domestic servants obscure the dire reality of the abuse they endure in the process. During recruitment, the unsuspecting youth were never told about the dangers of being caught without papers and working for total strangers or the total absence of labor laws to safeguard their welfare.

As a result, the illusion of job opportunities and remittances that could alter the living standards of their families often ends with physical abuse, mental breakdown, and psychological trauma. Burning of the limbs, sexual harassment, and cases where maids were killed and their bodies dismembered and dumped in the desert have been reported.

One of the girls I met at Dubai airport, Magallee looked exactly how I had imagined: house maids whose stories sound so unreal and undeserving, and yet it is true as daylight. Poorly dressed and malnourished, her horrendous story seemed fictitious at first but after this encounter, it was too true to be faked. Magallee was very fortunate to be at an airport not in the deserts. We made an instant connection, hurriedly walking toward each other as if destiny had brought us together after eternity. But beneath her smiles was a disheartened personality, a broken soul. Scanning her physique, it is easy to deduce that she had gone through hell to get there.

I wished to ask her to tell me if she was willing to return home, to her family no matter how impoverished they were. I would put down her exact response in this diary but I do not speak Amharic that well. She asked if the gate number was 8. I nodded. Magallee sounded fearful speaking Afaan Oromo, although she said she was one. The generational inferiority complex planted in the minds of Oromo people was evident from her mannerisms. Such is the story of Oromo people who fought against colonialism, but became victims of a ‘modern slavery’ both at home and abroad.

Magallee had a chocolate complexion. She was slender and an inch taller than I was. Perhaps frightened, shy or ashamed, Magallee avoided eye contact, but I stared into her eyes as if to get a glimpse of the suffering she had endured. Hoping to carry conversations and make her comfortable, I told her about my life. She looked baffled that I was on my way to Oman to study Arabic. My own privileges discomforted me.  She praised my accomplishments and noted how lucky I was to be educated.

Magallee had been to school but could barely read or write English. She came to Dubai in search of work after completing eight-grade in Ethiopia. Looking away, as if into the past, she told me how she made the worst mistake of her life three years earlier. She dropped out of school because she found no use for it. Even if she was educated, Magallee knew that without the right connections or membership in the ruling party, she wouldn’t be able to secure a job in Ethiopia.

Connections, she didn’t have.

Besides, most of her friends had left school and went to the Gulf region even though nothing of them had been heard to date. But like her friends, Magallee begged for money, sold what little her family had, paid a certain agency a lump sum to facilitate her employment, and purchased a one-way ticket to Dubai. She convinced her parents that by going to Dubai, she would change their lives.

Upon arrival in Dubai, a man she knew nothing of picked her up from the airport. But she felt safe because she knew a family member who was already residing there. She was immediately put on the job without any induction. An emirate couple working as teachers were to be her employers for the next two years.  She would have a total responsibility of running their house at all times. At 18, uneducated, and untrained straight from the rural Ethiopia, here she was being hired as a caretaker for a mansion in Dubai. Her duties included raising three children and performing all domestic chores such as cooking, cleaning, ironing, and hosting guests.

All the while, nothing was disclosed about her payments or contractual terms. She was only told that she would be there for two years. She was not to have a phone or keep in touch with the outside world, she would later find out.

Two years elapsed: Magallee was repeatedly beaten and abused, had her passport confiscated, denied contact with her family, and was paid only for the first year. She was glad for being able to send home that money.  When the two years passed, Magallee asked for her payments to go home. She was informed that she had to stay for another two years because she owes the employers money that they paid to bring her over. Shocked and confused, Magallee fell ill. Her health began to deteriorate. She could not visit a doctor because she had no money and she knew that if they paid for her medical expenses, the debt would go up.

Despite her illness, she had to maintain a regular workload, and when she could not perform her duties, she was locked up in a room. Tears rolled down her small eyes as she told me the story. She sobbed quietly so as to not attract attention, perhaps something she had grown accustomed to doing over the years. I wished all of it was just a dream. Magaalle could not say more. Even at the airport – far away from the house where she spent her darkest days and nights – she was afraid to speak up.

Her family knew little of her whereabouts, much less a return to Ethiopia. She worried about how she would be received at home. She carried a plastic bag in which her passport was wrapped. Nothing else. For many women like Magallee, this is a story of loss, disgrace, and disappointment. She hoped to ask someone to call her father once she arrives at the Bole airport.

And she knew her father’s number by heart.