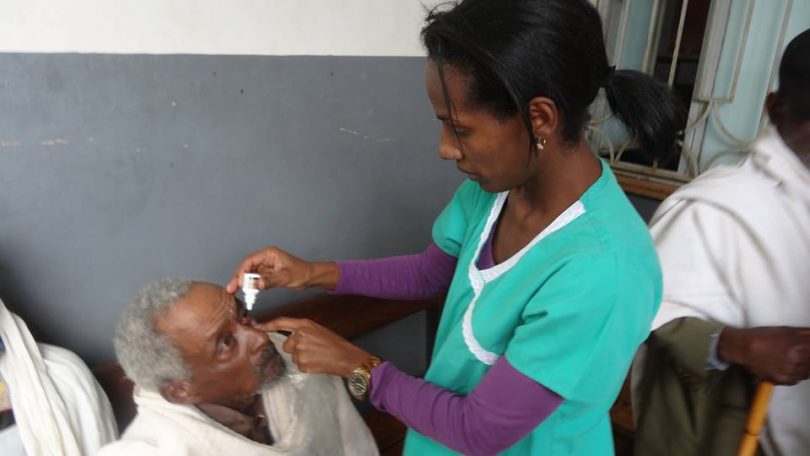 Located in western part of the Oromia region, Nejo hospital and its six physicians serve over 500,000 people. In this part of rural Ethiopia, where advanced medical treatments are almost always out of reach, villagers often walk 6-8 hours to seek medical attention. On Nov. 10, a team of 11 American doctors, nurses, and logisticians from northern California arrived in Nejo on a medical evangelism mission.

Led by Nejo-native Obse Lubo, the group has already restored sight to the blind, renewed hope to countless people with cleft lips, and provided much-needed medical training to the people of this underdeveloped region. Lubo who is on her fifth annual medical mission to the hospital, is founder of the EAMRF.

On the group’s first full day at the hospital, 39 patients received screenings for cataract surgery – while more than 260 people waited outside the eye clinic at Nejo hospital for their opportunity to be seen by Dr. Gerard Ardron, an ophthalmologist from Sonora, California. Assisting Dr. Ardron were his wife, Dr. Marigold Ardron, their son William, and two local nurses, who are being trained on how to use the donated state-of-the art screening equipment.

Meanwhile, Dr. Jonathan Freed, a plastic surgeon from Auburn, California, performed his own medical “miracles” by repairing cleft lips for over 13 people.

The oldest patient with a cleft lip was 50 years old; the youngest was six months old. Hundreds of villagers from the surrounding areas came rushing to Nejo Hospital for a shot at this life-changing surgery upon hearing the news that an American doctor had come to repair cleft lips.

“I will enroll him in school in September,” said an enthusiastic mother of six-year-old boy after her son, who had previously missed schooling for fear of harassment, received the surgery. “I have no fears now, my son looks the same as other kids in my village. I thank God for giving my son and me this opportunity. I thank all the American doctors that came here to help. My burden is off now.”

The Ardron family and Dr. Freed were joined in Ethiopia by co-founders of Here4them Scott Barlow and Mark Pierson; three nurses from California; an ultrasound tech; and four others who are helping with logistics and the organization’s evangelism mission. Volunteers organized by Here4them brought with them all the equipment and supplies needed to perform the surgeries.

More than 70 people including Nejo community elders, the Nejo Hospital director and doctors, Nejo’s City Mayor, and other government officials welcomed the medical team warmly and with much appreciation. In the first two days of the medical mission, Dr. Freed repaired 12 cleft lips and removed one cyst from an ear. He then headed to Gimbi Adventist Hospital, 55 miles west of Nejo, to do more cleft lip repairs.

Most of the patients coming to Nejo Hospital for the cataract surgery say that they have been blind for anywhere between 3 to 11 years. The youngest cataract patient was a 25-year-old college student; the oldest, 92 years old. All patients, no matter their age, were beyond grateful to have their blindness lifted. And were thrilled for a rare chance to carry on with their normal lives.