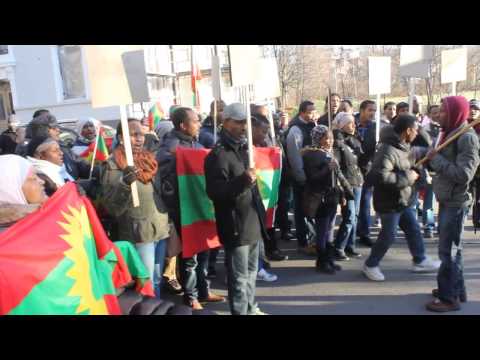 When the Saudi government started to crackdown on Ethiopian refugees and migrant workers last month, it was obvious that the consequent abuse was directed against all those who travel on Ethiopian passport irrespective of their particular national or ethnic identities.

From day one, we all reacted with anger, frustration, and despair. We were angry about the shameless infliction of brutality on these exilic souls referred to by the Saudis as ‘illegal residents.” We despaired at the lack of shame on the part of the Saudi police. We despaired at the lack of swift and appropriate response from the government of Ethiopia. We were frustrated by the total indifference of the international community.

Ethiopians of all colors joined hands in expressing this anger. We all agreed on the need to stop the violence. And that actions must be taken to support the victims by providing relief and protection through such measures as repatriation to their country, or facilitating the migrants safe departure to the countries of their choice, while also pressing Saudi Arabia to account for the atrocities perpetrated by its officers.

At first, the activists started with a tone that spoke more against the Saudis and less against the Ethiopian government. Some of the dominant voices among the Ethiopian diaspora who were unhappy with that narrative (and with Ethiopia’s response, or lack thereof) sought to change gears using the occasion to express their general protest against the Government of Ethiopia. At times, such a protest appeared inappropriate to the occasion or to the audience, and, in some instances, people went to the extent of fighting among themselves as a consequence.

On some of these occasions, I also observed the impropriety and the crudity of it all. I saw how this kind of activity risks the obfuscation of the message these protests were supposed to send. But even then, I understood its significance in venting out pent up political anger (which at times is so bitter only because of lack of political space at which to express it). I thought, may be, this is the diasporic folks’ way of reminding the public in whose countries they live about the problems that put Ethiopians in this position of precarity in the first place.

I thought, perhaps, this is the only way they participate in the political life of their country of origin—even by turning meetings called for expressing humanitarian solidarity into ones of raw hostility and agitation. I thought, may be, this is the only way they can keep politicizing the violence (in the good sense). May be, I thought, this invites a fertile ground within the context of which to understand the violence (by considering not just the atrocities in Saudi Arabia but also the systematic violence in Ethiopia that served as a push factor to create the refugee/migrant status for these victims there). I thought that perhaps this is another moment of political fecundity. This, I thought, is another moment of productive political conversation.

And then came the Oromos.

And they said, “We are Oromos, not Ethiopians. Stop the violence against the Oromos.” Then all hell broke loose in the dominant Ethiopian diaspora activist community. The anger turned against the Oromo now, not against the Ethiopian government, not even the Saudis. The violence of the Saudis became a non-issue. The social media community’s major preoccupation became why the Oromos say that, and whether they should be allowed to say that. As always Ethiopia’s problem became only Oromos and Oromia. It created an occasion for some to re-enact and foment long-held hatred for the Oromo. Some found an opportunity to indulge in a discursive violence that is beyond the pale.

I always thought that Oromos (and their demands) are one of the important high-stakes problems in Ethiopia.[1] But I never thought it was the only one, for it is only one of the several most important problems. Nor have I ever thought it is the only—or a unique – challenge posed by the ethno-national diversity, although it is increasingly coming to be portrayed as such.

But when the conversation shifted from one that condemns the Saudis to one that curses the protestors who demanded the cessation of violence against the Oromo, I wasn’t entirely surprised, but I was genuinely intrigued. And I asked questions.

Why is it that folks who used the occasion to put up a general protest against the government so shocked to see the Oromos, too, used the occasion to protest against the Government of Ethiopia? Why was it that the Oromos’ invocation of their particular lived experience taken to be so much of a heresy? Why is it that some of us feel justified in (de)selecting voices that can qualify for presentation in these platforms? Who are we to make judgments about who can protest and who can not?

Why don’t we try to make a closer analysis of the demographics of these refugees/migrant workers and their backgrounds? Why was it that this didn’t occasion an opportunity for a robust engagement with the push factors in Ethiopia? Why was it that we have not even thought of the political economy of repatriation of these victims? (Are they going to benefit from the repatriation? What are they being repatriated to? Where are they going? Who stands to gain from their repatriation? And who stands to lose? At whose expense do these acts of repatriation happen?

When the Foreign Minister, Tewodros Adhanom, said ‘We will bring them home,’ many people were heartened. I found myself thinking: What is home to the Oromo migrant? Where do the Oromo migrants go to? Is Ethiopia, the ‘home’ Foreign Minister Tewodros talked about, home to them, too? Has it been home for them before they left? What is home without your dignity? What is home when all you find there is the indignity of poverty, inequality, insecurity, and all forms of unfreedom? What is home to the homeless at home? What is home if it is a place where you have no prospect, no hope of dreaming your way out of your miserable existence, when it is a place where you can’t dream dreams that allow you to step out of your seemingly eternal precarity? What is home without your dreams (even dreams of self-estrangement)?

For some of them, home could be exile, only more exilic than exile itself. Perhaps more atrocious than the atrocities of the Saudis.

The debate in social media, and the reaction of most Ethiopianists, in its rage and fury about the Oromos distancing themselves from Ethiopia, seems to suggest that voices of protest are differently valued. Even protests initially meant to express mere human solidarity dissipate into resistance to the Oromo demand for self-distantiation, that perennial Oromo quest for justice expressed in the language of dis-association with/from Ethiopia. In this context, exilic Oromo’s homelessness and continued estrangement is not only underappreciated but also interpreted as an affront to Ethiopian nationalism. The self-distantiation (itself preceded by historic marginalization) from Ethiopia is taken, not as a corrective critique to oppressive state nationalism, but as a heresy that seeks to undermine and demolish this state nationalism.

State nationalism in Ethiopia is constantly unsettled. In its unsettlement, it is deeply wounded. In its woundedness and consequent insecurity, Ethiopian state-nationalism mourns its ‘loss’ every time its Oromo critique rears its head in resistance. Constantly haunted by its repressed other, it continues to be overly exercised by the voices of protest. The more distinct these voices (as they often become when the language used is ‘We are Oromos, not Ethiopians’), the more it provokes anger among state nationalists. By so doing, the former succeeds in its resistance. In their call for the Saudis to stop the violence against the Oromos (just as in their denial of being Ethiopians), they are not just resisting the blunt and more immediate violence Saudi officers are inflicting on them, but also making an indictment of the subtle and more systematic violence they sought to escape from as they migrated away from home. In a sense, they are seeking relief from the tragedy of being repatriated to the home that never was.

The Oromo self-distanciation also succeeds as a mode of critique (whose task is to unsettle, irritate, satirize, and destabilize existing assumptions and boundaries). Its success is incomplete, though, because the kind of conversation state nationalists are engaged in is not one of working towards focusing on the push factors but rather towards pushing the Oromo further away. The state nationalists still seek to silence the Oromo. By trying to deny space to their distinct voice of resistance, they even seek to condemn them to the very atrocities they were initially protesting against. They condemn these exilic souls further into exile.

In reacting to it angrily, the Ethio-nationalists sought to condemn them into the very suffering they were initially outraged by; they tried to deny them the right to distance themselves from the atrocities and the consequences thereof: the pain of loss, the anguish from attack and abuse, the sorrow from homelessness, the agony of exilic placelessness, and the suffering from all this and from a hope indefinitely deferred.

If home is relational (as I assume it is) and if it is made in the course of an intimate conversation with the relational other, to the extent it is not happening between and among Ethio-state nationalists and their Oromo critic; to the extent Oromos aren’t allowed even to ‘speak’ about their plights in their own distinct voice as Oromos; to them, home remains a longing. For, under the circumstances, they will never be able to find their home in a shared conversation. Perhaps for those of us who seek justice, home remains to be only in the longing, the longing to belong and unbelong at the same time.

The writer, Tsegaye Ararssa, is a Melbourne-based legal scholar and a graduate student at the University of Melbourne Law School.

[1] It has been a while since Paul Baxter captured the problematic and/or problematized nature of the Oromo relation with the Ethiopian state in, ‘Ethiopia’s Unacknowledged Problem: The Oromo’ (1978) 77 (208) African Affairs, 283-296. But even he didn’t conclude that the Oromo is the only problem of Ethiopia. Most recent debates on social media seem to obsess with it as if it were the only problem of the ‘polity’, especially when it comes to the issue of diversity. The Oromo demand is increasingly being presented as an exceptional one, sort of an aberration, to the pattern in the wider Ethiopia. The continued controversy around the demands of the Oromo, the continued failure to understand it (the almost deliberate predilection to misunderstand it), its continued return to haunt a state nationalism that repressed it in the past and is ill-equipped to address it in the present suggests that the Oromo question (and the question of the Oromos) is still unacknowledged for what it is, at least not in its own terms.