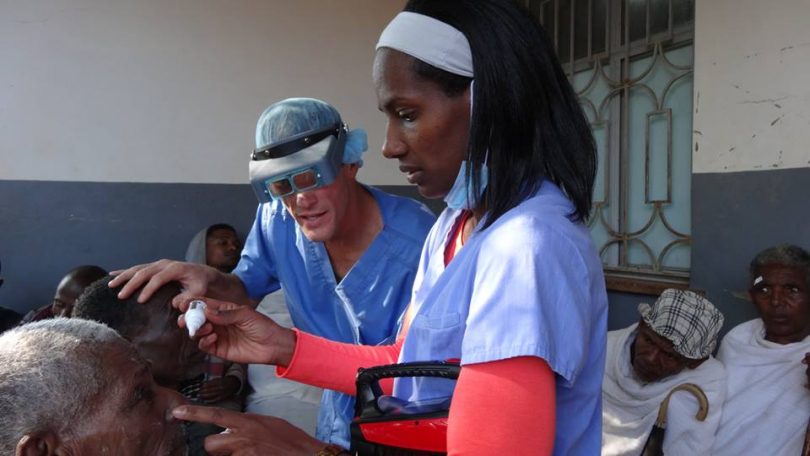 (OPride) – Tamiru Banti’s father walked six and a half hours to get to Nejo Hospital so that his son can be seen by a volunteer eye doctor from California.

Tamiru, 20, lost his right eye at the age of two. His long walk to Nejo Hospital was not a usual trip, but, for Tamiru who rarely leaves his village, it was a journey to reclaim his childhood and the future he once thought lost.

The loss of sight had kept Tamiru from attending school. “I’m determined to go to school when the school year starts in September,” enthusiastic Tamiru told Dr. Dr. Gerard Ardron, the American ophthalmologist who performed the surgery. “Now I willl also be able to help my father on the farm.”

Tamiru’s father was even more emotional. “I have been waiting for this day to come,” he said. “God had answered my prayers and sent these angels to restore my son’s vision and his life. I’m at peace now that my son is able to see.”

Tamiru is one of the hundreds of patients who came to Nejo hospital seeking eye treatment. The next day, Dr. Ardron operated on an elderly couple that traveled three hours on foot to reach Nejo. Married for over 30 years, cataracts had blinded them both in their left eyes years before. The husband, Obbo Terfa T, had been blind for almost five years while his wife had been blind for over three and half years.

They spoke about how blindness had made their lives as farmers very difficult. “We are grateful and lucky to get a free cataract surgery on the same day,” said Obbo Terfa. “Once again, we are a whole person.”

The pair left the hospital with smiles on their faces and a revived hope for their future. Over the course of the week, due to the number of patients that came seeking cataract surgery, Dr. Samuel Bora, an Ethiopian ophthalmologist with Tropical Health Alliance was called in from different city to help perform the surgeries on his day off.

Bora performed 32 surgeries in two days before heading to Mendi, a town 75km West of Nejo, for a cataract campaign.

All in all, Dr. Ardron operated on 162 patients during his visit to Ethiopia. The American doctors, nurses, and logisticians departed Nejo but their volunteerism has already made a lasting impact. Since their departure, a local nurse Misgana Mosisa had performed eight more surgeries on his own.

Sadly, over 300 patients who were registered for the cataract surgery were turned away due to lack of time and resources. However, Dr. Samuel Bora with Tropical health Alliance had promised to come back to Nejo for cataract campaign in June of 2014, the East African Medical Relief Foundation (EAMRF) will help planning for the campaign and logistics. Even if they must wait, some of the patients who were turned away will no doubt have their visions restored.

After the cataract campaign at Nejo hospital was completed, Here4them founders, Mr. Mark Pierson and Scott Barlow spent another week at Gimbi Adventist Hospitals conducting cataract campaign with two ophthalmologists from California and the Washington State.

The Nejo trip organizer, Obse Lubo trained nurses at Nejo, Begi, and Gimbi hospitals in Western Wollega zone on infection prevention guidelines. The training was well received by the nursing staff and hospital administrators. Eight nurses who are studying Nursing at University of Missouri- Kansas City prepared the guideline. The nurses have never been to Nejo or Oromia before, but they have been corresponding with Obse over the past 10 months to learn about the Oromo people, and state of healthcare in Oromia. The print out of the guideline was placed in medical ward and labor and delivery departments at all the hospitals for the local staff as a reference. If implemented, the guideline will tremendously reduce the spread of infection at Nejo hospital and other area hospitals.

On its fourth mission, EAMRF has also provided Nejo hospital with much-needed medical equipment including two brand new AED monitor (defibrillator) and cardiac medications, antibiotics and prescription eyeglasses. Rotary Club of Castro Valley donated the AED monitors while Memorial Medical Center in Modesto, California and the Modesto Vision Center provided the rest of the supplies. Coral Parish, a volunteer Nurse from Northern California, donated 600 pieces of reading glasses to Nejo hospital eye clinic, which were distributed to the people of Nejo and surrounding towns free of charge.

“My heart is filled with a lot of gratitude for our supporters, who made this mission trip the more special,” EAMRF founder Lubo said after returning to California. “So many lives were touched by the surgeries that were performed by our volunteer team.”

Lubo expressed her heartfelt gratitude to all the volunteers from California including Mark Pierson and Scott Barlow of Here4them, Dr. Ardron’s family, Dr. Freed, and the Here4them, which played a vital role in coordinating this year’s trip.

“This year’s trip really changed my life,” said Lubo. “Seeing the transformation that has taken place in Nejo since our first mission in 2009, especially the work on the Oromia Diagnostic and Imaging Center was like watching a child grow.” Lubo is still fundraising to build the center.