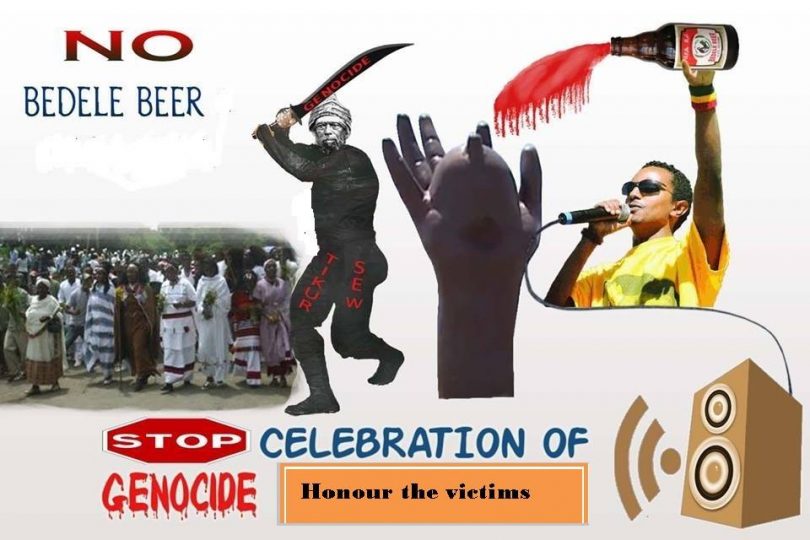 Bedele Brewery, a local subsidiary of the Dutch beer maker Heineken NV, announced its agreement with Kassahun for a year long national tour at a press conference in Addis Ababa last week.

Kassahun, better known by stage name Teddy Afro, is a polarizing pop star in Ethiopia. His fans admire his musical talent while critics despise his unapologetic hero-worship of past Ethiopian rulers. Teddy has songs idolizing both emperors Haile Selassie and  Menelik II.

The viral campaign, which goes with a hashtag #BoycottBedele, is asking beer drinkers in Ethiopia to ditch Bedele products and also pressure regional officers to withdraw the sponsorship. It has reportedly been featured on the state-run Oromia radio, which broadcasts in Oromo language to millions of listeners in the populous state.

Not everyone is happy with the campaign. Several Ethiopian activists have characterized the campaign as ’emotive’ and questioned the motives behind the campaign. The backlash against Teddy is in part heightened by a comment the singer made in an interview with local magazine, in which he reportedly said, Menelik’s war of conquest in southern Ethiopia amounted to ‘a holy war.’ Others cautioned that Teddy’s crusade gaffe was ‘unconfirmed’.

However, the organizers insist that, while the comment might have given them a renewed impetus, Teddy’s tour would have been boycotted even without the comment. “Teddy’s glorification of the 19th century monarch, who committed ethnic cleansing against various nations and nationalities in southern Ethiopia, is not new,” reads their press statement. Others worry that the campaign amplifies an already tense ethnic relations.

However, as with all discussions on Ethiopian politics, the lack of acknowledgement for past injustices and nuance is self-evident from responses to the campaign. Many Ethiopian activists denounced the campaign without acknowledging the idea that “one man’s hero is another man’s genocider.”

Ethiopia has a contested history. But almost all historians agree that Menelik’s ambitious greater Abyssinia campaign was brutal. “Wherever he faced fierce resistance, Menelik responded with the most barbaric and horrific forms of violence sometimes cutting off hands of male adults and breasts of women,” wrote the Boycott Bedele campaign. “Menelik’s soldiers settled on the land they conquered, continuing with their brutality as they expropriated land and turned the indigenous population into serfs.”

This remains one of the most contentious events in modern Ethiopian history. Menelik’s statue stands erect near Addis Ababa City Administration not far from where his army massacred Oromo peasants at the battle of Gulale. The Oromia Regional Government has recently erected statues in Anole and Calanqo – where such heinous crimes as mutilation and mass killing took place – in remembrance of those who perished under the barrel of Menelik’s guns. In essence, Ethiopia’s history is fraught with painful episodes many of which are rarely, if ever, acknowledged.

The campaign organizers say the next step is distributing brochures across Oromia, especially in Jimma, Dire Dawa and Adama towns where Teddy is expected to hold concerts. They are asking locals to stay home and more importantly use civil disobedience to obstruct the concert.