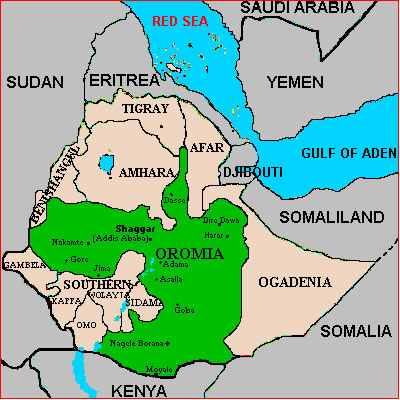 (OPride) – There is an ongoing coordinated attack on the right of nations and nationalities to self-determination in Ethiopia. This campaign is led exclusively by the Amhara elite with the aim of creating delusions among the general public.

They deceptively attribute the failure and brutalities of EPRDF, Ethiopia’s ruling party, to its policy of ethnic federalism. Ethiopia adopted federal government arrangement in early 1990s on an ethno-linguistic basis in an effort to decentralize the Amhara-dominated highly centralized structures of imperial Ethiopia.

By attributing the failure of the ruling regime to ethnic federalism, the Amhara elites want to score two goals: to take back the Menelik palace and demolish self-determination of nations granted by the 1994 constitution, at least in theory. They curtly refer to this arrangement as tribal politics (ye-gosa poletika) and a linguistic based division (be kuankua kefafelun).

Indeed, it is difficult for ordinary individuals to disentangle the socio-economic and political failures of EPRDF from the so-called “discontents” of ethnic federalism. However, this is not due to the failure of the structure per se but rather of the regime’s unwillingness to implement constitutionally mandated rights of nations.

In their advocacy for a return to the pre-1991 centralized state structure, these elites often criticize ethnic federalism for weakening the Ethiopian identity. Whenever tribal clashes occur – including instances where the conflicting tribes share the same ethnicity – the Amhara elite deliberately blame ethnic federalism to mislead the public and whip up public opinion against the federal structure. In this context, they try to use public grievances toward the regime for their disguised agenda of reclaiming ‘one Ethiopia.”

In addition, since they cannot dismantle self-determination alone, the Amhara elites hope to ride on public grievance both to abolish ethnic federalism and overthrow the regime. However, they seem not to comprehend that such a misguided strategy risks further balkanization of the country, not to mention it’s too weak a strategy to be taken as an alternative to EPRDF.

The current geo-political boundary of Ethiopia was formed roughly about a century ago when King Menelik II of Abyssinia conquered the states and kingdoms to the south and southeast of its territory. While his war of conquest was one of the bloodiest in the country’s history, understanding how the right to self-determination of nations came about and why it is vital to the territorial integrity of the empire requires closer analysis of the post war period.

After the forceful incorporation of southern nations into Abyssinia, Menelik and his successors designed a strategy to preserve the empire intact. At the heart of this strategy was a plan to undermine the languages, cultural heritages and the economies of conquered nations. They established a feudal system whereby the natives were required to pay at least a quarter of their hardly earned produce to landlords. In other cases, the natives were evicted to free up land for settlement of people from northern chiefdoms. Such mass evictions over a protracted period of time particularly targeted at the Oromo. For example, until 1940s and 50s, many Oromo clans from Shawa were forced to flee their original homeland and relocate to the southeastern parts of Oromia in search of a farmland. Besides economic exploitations, the feudal state also conducted extensive campaigns to exterminate native people’s cultural heritages, religious institutions and languages. In some places, the effects were so expansive that people concealed their innate identity and changed names in order to assimilate.

It was only in 1950s that organized movements to curb the exploitations of the state began to coalesce in various parts of the country. With the help of these movements, the feudal system was abolished in 1970s. While it ameliorated the sufferings of the masses to some extent, the extractive state structures were left untouched by the reform. For example, given their differential access to educational opportunities and the enabling imperial structures, the feudal Amhara rulers continued their dominance of the country’s politics and economy. Forced to study in alien language, few from other nations managed to achieve academic success in those days.

Limited reforms did not allow for self-determination of nations, either. For example, until 1990s, attempts to transform Afan Oromo to a written language were repeatedly thwarted. Those who tried to devise an Oromo writing script were targeted and killed. The awakening of oppressed nations and nationalities with access to education posed a grave danger to the status quo.

Subsequently, the brutal economic, cultural and political oppression gave birth to dozens of ethnic-based liberation fronts. In the later parts of 1980s, these forces aligned to squash the military and political power of the Amhara based rule. In 1991, they drafted a transitional constitution that became an antidote to the country’s most fundamental problems through the right to self-determination. In theory, the ethnic self-rule freed all nations from the century old economic, cultural and political domination by the Amhara ruling class. Moreover, it became a shield for endangered languages, cultural heritages and identities from the inertia of the country’s institutionalized assimilationist policies. It allowed the nations to manage their land and other resources.

In this context, it is difficult to argue against the relevance and legitimacy of the right to national self-determination. In other countries such as India, Canada and South Africa, such rights are in fact accompanied by ‘affirmative actions’ of one kind or another for historically marginalized groups

However, much like the reforms of 1970s, instead of establishing a truly decentralized and inclusive governance structure, the ruling Tigrean elite, TPLF, imposed its own prototype of extractive political and economic institutions using their comparative military advantage. It replaced forces that fought for the self-determination of other nations by quack organizations made up of incompetent, craven, self-seeking and less educated individuals from each of these nations. These individuals are used as representatives of diverse groups for the purpose of international propaganda consumption.

Nevertheless, the constitutional reform erased restrictions on the use of own language for administrative and educational purposes, and the right to preserve local culture, historical heritages and identity. TPLF’s opportunistic behavior and the inability of oppressed nations to compel the regime to respect hard earned constitutional rights is now giving the Amhara elite to tout a return to their outdated model of government. They attack self-determination while ironically accusing TPLF for hijacking the victories of the oppressed people in pursuit of its gluttonous economic exploitations and political domination.

At a quick glance, one may presume that Amhara’s deep-rooted scorn for TPLF is intertwined with that of self-determination and their inability to retake the state power. I believe such a conjecture is mistaken. First, had the problem been the partially implemented self-determination, such a sentiment would have been shared by others ethnic groups. In addition, Amhara elites lament that the TPLF failed to respect the rights of individuals and nations, and that it ‘divided’ the country along linguistic boundaries.

They also argue that the current structure limits the rights of Amharic speaking people to move around the country in search of better opportunities. For example, the Ethiopian Satellite Television Service (ESAT) runs a youth talk show dubbed ‘Yewetatoch wuyiyit’, the first three rounds of which tried to “reveal” how ethnic federalism undermined the mobility and thereby economic benefits of Amharic-speaking groups. This could well be one of the downsides of ethnic federalism, but why don’t we hear Oromos, Somalis, Tigreans and other language groups complaining about this? One wonders if a return to a “one language, one nation” policy the best way out as often suggested by these groups.

So why is it only the Amharas complaining?

It is simply because they cannot afford to be equal. In the pre-1991 era, Amharic was the only official language in every corner of the country. As a result, Amhara children had no problem getting admission to schools. Upon graduating, they had no constraints in moving around the country to seek better job opportunities. The same was true for well-connected Amharic speaking business owners. They could open up a shop or restaurant in Jijiga or Nekemte without having to speak the local language. The burden of learning the language was transferred from the businessman offering the services to local residents who seek those services. In other words, the locals had to learn Amharic in order to do business with them on their own homeland.

In those days, without speaking Amharic an individual from the Somali or Oromia region, who had no access to schooling, cannot even be hired as a driver, storekeeper or gardener in any government institution.

The 1991 reform flipped the odds by putting an end to Amhara’s privileged status at the expense of three-quarters of the country’s population. For those who had been favored for so long, the leveling of the field may seem unfair. But one reality must sink: a return to an Ethiopia where Amhara’s are once again the overlords is a foregone conclusion.

These groups don’t realize that their supposed unity agenda has adverse effects on the very virtues they vow to protect. The Amhara politicians’ demagoguery is filling Amharic-speaking innocent youth with illusions and empty hopes that everything that came with TPLF will go with it – soon. As a result, instead of adjusting to the changes in the system, most Amharic-speaking groups line up behind their politicians to abolish the system.

Once while traveling from Finfinne to Adama, I sat next to a young lady who cried hysterically all the way. Hoping to commiserate with her situation, I inquired what was wrong. She state that she had just graduated from a private college in Nursing and the Oromia Bureau of Health only selected their own “applicants” – those who spoke Afan Oromo. Puzzled by her anger, I politely asked how she hoped to work in rural Oromia without speaking the language. She reasoned never envisioning that not speaking a language would be a barrier to employment, and even confessed once ridiculing or walking out of Afan Oromo classes.

Many are running into similar problems. But instead of hoping against hope for a return to ‘united’ Ethiopia with Amharic as the only official language, Amharic-speaking individuals residing in the south should consider adjusting themselves to this irreversible reality.

At the moment, two opposing political narratives are dwarfing the struggle for justice and freedom in Ethiopia. While those who advance the ‘united Ethiopia’ political paradigm are hoping to undo the country’s ethnic federalism, their opponents are struggling to consolidate the gains that came with the structural changes. Had it not been for their amnesia, there are several lessons the Amharic-speaking elite could learn from the changes of the last two decades. Eritrea went while a loose confederation could have easily been pursued. And they blame TPLF for making the country landlocked. Continued attempts to scoff at national self-determination of ethnicities will only replicate this mistake.

And the Amhara elites have only themselves to blame for it.

*The writer, Hundanol A. Kebede, can be reached at hundiguddaa@gmail.com