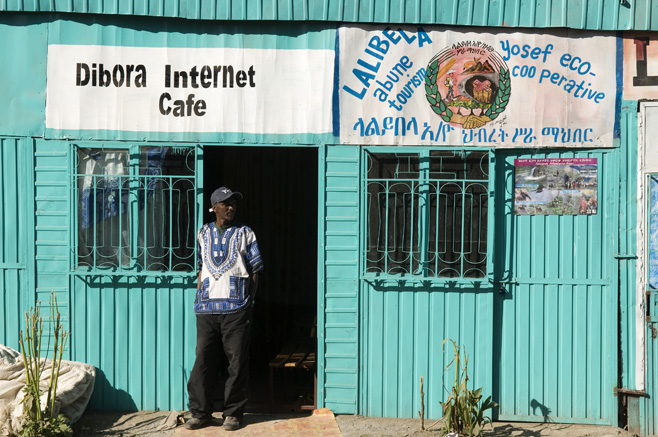 (OPride) — The Ethiopian government uses its monopoly over the telecommunications system to curtail the right to privacy, freedoms of expression, access to information and lawful opposition activities, the Human Rights Watch (HRW) said in a comprehensive report released last week.

The 145-page report, “They Know Everything We Do: Telecom and Internet Surveillance in Ethiopia”, conducted by Felix Horne and Cynthia Wong, sheds a rare light on allegations about Ethiopia’s blooming surveillance state.

“Information gleaned from telecom and Internet sources is regularly used against Ethiopians arrested for alleged anti-government activities,” the report said. “During interrogations, police show suspects lists of phone calls and are questioned about the identity of callers, particularly foreign callers. They play recorded phone conversations with friends and family members.”

While Ethiopia blocks almost all diaspora based critical blogs and websites, recently it has turned to “highly advanced surveillance tools to covertly monitor online activity and steal passwords and files” of prominent diaspora-based activists, the report added.

Even in rural areas, where access to phone and Internet services is virtual inexistent, the government uses extensive networks of informants and a grassroots system of surveillance to maintain control over flow of information, the HRW said. “We can’t go anywhere without them knowing, we can’t speak bad things about government without having trouble, we can’t get education or services without supporting them,” one farmer from Oromia told the group. While the regime uses threat of terrorism as a pretext, its “surveillance puts a significant focus on individuals deemed to be a political, rather than a security, threat.”

Ethiopia, which has acquired some of the world’s most advanced surveillance technologies, may soon scale up its unlawful and pervasive telecom surveillance, the HRW noted. The fear of surveillance has already forced many to self-censor thereby silencing independent voices and limiting freedom of speech and opinion.

Chinese and European firms, which provide the products, services and expertise to modernize Ethiopia’s state-controlled telecom sector, have enabled the government to build extensive infrastructure for surveillance, according to this report.

The HRW research, conducted between September 2012 and February 2014 in 11 countries, is based on interviews with more than 100 people, including former and current intelligence and security officials, Ethio Telecom employees, and other government officials.

The detailed report underscores disproportionate and widespread targeting of Oromo activists. “The ethnic Oromo population has been particularly affected, with the ruling party using the fear of the ongoing but limited insurgency by the Oromo Liberation Front (OLF),” it noted. “The government uses the specter of an ongoing OLF ‘armed struggle’ to justify widespread repression of Oromo individuals. Regional government and security officials routinely accuse dissidents, critics and students of being OLF ‘terrorists’ or insurgents. Thousands of Oromo from all walks of life have been targeted for arbitrary detention, torture and other abuses even when there has been no evidence linking them to the OLF.”

A former Ethiopian intelligence official told HRW, Oromo people, especially the youth, still hold a favorable view of the OLF. Ethiopian authorities use the organization, which it considers a terrorist, although it poses no such threat, “to marginalize Oromos — there is a threat from the idea of OLF, but not from the actual [organization.]”

The vast majority of the cases documented by Human Rights Watch involving access to phone recordings involved Oromo defendants organizing Oromos in cultural associations, student associations, and trade unions. No credible evidence was presented that would appear to justify their arrest and detention or the accessing of their private phone records.

The Ethio Telecom’s monopoly over Internet service provision has left the country lagging far behind regional average. Less than 1.5 percent of Ethiopia’s 94 million people are connected to the Internet and fewer than 27,000 broadband subscribers countrywide. Ethiopia also has one of the most expensive broadband in the world. While Wi-Fi Internet has grown in recent years, outside of major towns, speeds are excruciatingly slow, and are prone to frequent outages, according to the report. In addition, the report noted, the desire to control the telecom sector, is “stunting economic growth, particularly in rural areas, and limiting opportunities for the spread of ideas and information across the country.”