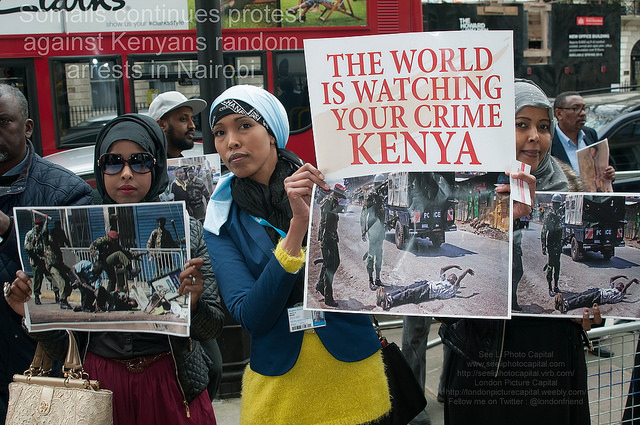 (OPride) — Since Kenya began its security operations on March 31, nearly 6,000 foreigners and some Kenyan citizens of Somali origin have been arrested.

So far, close to 200 people, mostly undocumented Somali immigrants, have been deported, according to local media reports. Thousands of detainees are being held in a temporary makeshift “prison” at Kasarani Stadium, the site of President Uhuru Kenyatta’s inauguration last year. Kenya is upping its counterterrorism measures in response to an upsurge in grenade attacks — the worst of which hit the Westgate Mall in Nairobi’s suburb last September.

The indiscriminate swoop has drawn the ire of human rights organizations. In addition to poor prison conditions, the Kenyan police is accused of not arraigning those detained within 24-hours stipulated by that country’s law. But these stories have already been reported in the mainstream media. With all attention focused on the prejudiced profiling of ethnic Somalis, Oromo refugees from neighboring Ethiopia say they are caught in the crossfire and that their plight have been overshadowed.

“More than 400 Oromos and other Ethiopian immigrants have been arrested in these crackdowns,” Canada-based Human Rights League of the Horn of Africa (HRLHA), said in a statement this week. HRLHA listed the full names of 49 Oromos it said were caught in the security dragnet. Over the last two decades, as the Ethiopian regime intensified crackdown on Oromo dissent, millions of Oromos have crossed into Kenya seeking asylum. Last July, the United Nations Refugee agency estimated there were more than 600,000 asylum seekers and refugees in Kenya out of which some 56,000 lived in Nairobi alone. Some 10,568 of those registered with UNHCR were from Ethiopia, the second largest segment after Somalis.

Nairobi’s Eastleigh neighborhood, where the crackdown is still ongoing, is home to Somali and Oromo refugees. Speaking to the Voice of America’s Jalane Gemeda on Wednesday, two Oromo migrants currently being held at Kasarani said they are legal refugees carrying UNHCR identifications.

Those on the outside say they can’t leave their homes due to fear of arrest. “We closed our doors and turned off the lights, but they are still banging on it,” Abdul J told OPride last night in an email from Nairobi, where the Kenyan police is still going door-to-door “literally arresting anyone who looks different.”

Others are desperately searching for and trying to free their loved ones arrested during the Stop-and-Frisk style sweep. “My pregnant wife, 17-month-old child and sister are in there,” Mahdi Ibrahim, 39, a refugee from Ethiopia told the New York Times. “This is the second time they come and arrest my family. Our refugee papers are valid.”

The refugees are calling on the international community to intervene on their behalf. They are also asking the Oromo diaspora to help amplify their “cries.” Kenya occasionally repatriates asylum seekers from Ethiopia. Several Oromo activists who have been refouled back to Ethiopia have disappeared and at least one person has died in Ethiopian prison over the last few years. Most Oromo refugees fear for their safety upon return to Ethiopia.

A few of those still in Nairobi have setup a Facebook page, Justice for Oromo Refugees in Nairobi,” to create awareness about their plight. Anthropologist Mohammed Isa, one of the group’s coordinators, have written about their ordeals in greater details on CNN’s iReport page.