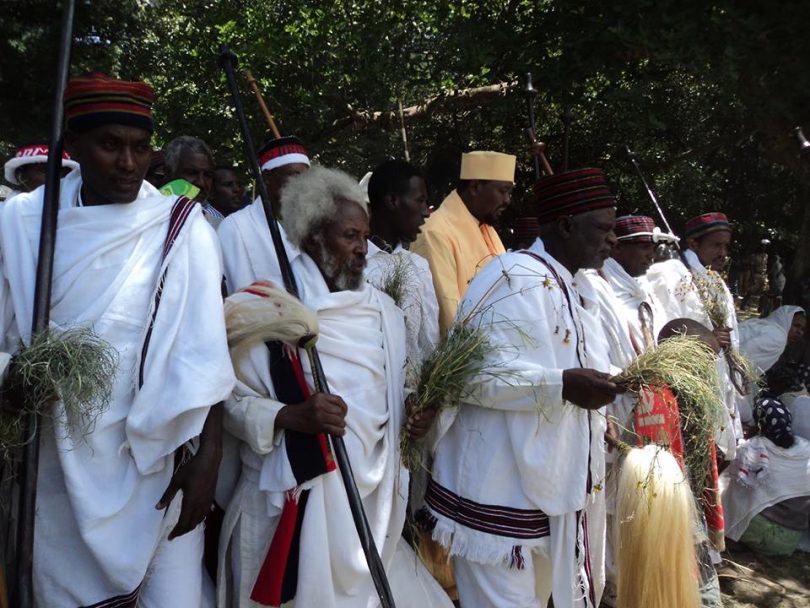 (OPride) — Sociologists use race, ethnicity, culture, language and religion as the most common basis of identity.

These factors dictate how people self-identify since individual’s self-perception comes from one’s genetic origin and socialization.

People identify as members of a certain race or ethnic community based on their subjective perceptions of self, learned through the process of acculturation.

Not unlike other groups, there are lists of identity markers that distinguish the Oromo people from others. We use this collective self-identifications based on common ethnic origin and similar psychological makeup to establish a claim for distinct Oromo identity.

In this sense, in order to claim an Oromo identity, one has to be born, adopted or socialized into Oromo culture. Using this logic, the notion that Oromo’s socio-cultural identity is different from Habesha (i.e., Semitic language groups from northern Ethiopia) is a sound and valid argument.

In fact, tracing one’s genealogical roots has a prominent place in Oromo culture. Oromos crosscheck strangers’ paternal bloodline to identify who is an insider and who is not or even in cases of arranged marriages.

Questions such as “Gosa tami? Balbala tami? Warra kami? Ilma eenyuti?” — what is your clan and moiety — still follow standard greetings upon initial encounters with Oromo elders. The sociological origin of Oromummaa, the Oromo national identity, lays in this search for one’s genealogical roots.

Definitions vary. For the purpose of this paper, Oromummaa refers to the socio-political value of an individual gained through socialization into Oromo culture, language and political experiences. Thus, under this construct, Oromummaa does not necessarily emanate only from being born Oromo since becoming is also a possibility.

In contrast to Oromo identity, the ethnicized Ethiopian identity is often characterized, among other things, by one’s ability to speak the Amharic language and membership in Orthodox Christianity. In principle, the Ethiopian identity is not based on one ethnicity. It is supposed to be a civic politico-legal identification that manifests the aspirations of all of its constituents. But Amhara elites distorted and ethnicized this outwardly ‘national’ identity from its inception to fit their own perceptions of self.

It is on those grounds that Oromo and other southern nations reject the imposition of Ethiopian identity on them even beyond socio-cultural differences with the Habesha. Ethiopia is not an ethnic entity. The wicked attempt to make it one has already failed. Thus, the rejection of Ethiopia as a state identity must be based on ‘political objectives’ that defy oppressive politico-legal systems instead of ethnic differences.

It is impossible to separate socio-cultural identity from politics. Any attempt to do so would be a futile exercise since people’s social construction and identity politics are inseparably related. Identity politics is nothing but a political activism by groups that are excluded from mainstream politics. It is a movement to mainstream one’s own agenda among competing ideas. Wherever there is marginalization, group consciousness naturally develops into a political action. Such is the case of the Oromo freedom movement.

Elites use socio-cultural identity as a basis of solidarity to mobilize an oppressed group in order to attain a political goal that protects both their identity and the group’s interest. Theoretically, such a political identity should be civic and universal, especially where diverse groups wish to live together in harmony under one system.

The assumption is that a value-based, overarching civic political system protects the socio-cultural identity of each group in the union. Ethiopian empire builders failed to envision this form of political identity from the beginning.

Oromummaa is but a manifestation of the political aspirations of Oromo people. As an organizing principle, it envisions common values and a certain worldview that embraces the principle of public governance. The struggle for reaffirmation of Oromo political identity is a quest for democracy, equality and respect for human rights.

Although this Oromo identity is fetched from a very particular historical experience, Oromo people’s political destiny should be articulated in a way that it depicts a vision for humanity. In other words, the Oromo political identity needs to be constructed as something more than Oromo’s mere socio-cultural identity.

It is a delicate, sensitive matter to disassociate the Oromo political identity (state citizenship) from the people’s socio-cultural identity. But notably the later (defined as being born Oromo) automatically excludes non-Oromo individuals living in our midst from membership.

Hypothetically speaking, passing Oromo socio-cultural identification test is not a requirement to become a citizen of the ‘republic of Oromia’. Non-Oromo individuals can be ‘naturalized’ citizens (Oromsiisu) as long as they pass a civic test. Otherwise, unless we take cautious steps in drawing these distinctions, we risk repeating the same mistake the Habesha rulers committed. At the same time, there cannot be two tiers of citizenship since differential treatment among citizens breads conflicts.

Oromo nationalist leaders should carefully articulate their political visions of what citizenship would be like under ‘republic Oromia’. How would a civic, inclusive Oromo political identity be characterized?

Living together with others under a democratic entity is not a strange idea to the Oromo. Scholars explain that the Oromo political identity is not an exclusivist concept. For example, a prominent Oromo sociologist, Assefa Jalata argues that the basis of Oromummaa must be built on overarching principles that are embedded within Oromo traditions and culture and, at the same time, have universal relevance for all oppressed people.

As Jalata points out, Oromummaa is an egalitarian democratic vision that stands for mutual solidarity and cooperation among all people who accept the principles of self-determination and multinational democracy. This is not a new concept per se. It is an old Oromo political value.

If immersion in Oromo culture is not a requirement for an individual to become a citizen of ‘Democratic Republic of Oromia,’ the same logic explains the possibility of the same individual becoming a citizen of ‘Democratic Republic of Ethiopia’ without the need to be immersed in a different culture. In that sense, the idea of being or becoming a citizen is simply a political exercise no matter the name.

The notion of ‘Democratic Republic of Oromia’ presupposes the existence of certain democratic values and a just political system that respects other people’s distinct socio-cultural identities. As such, becoming the citizen of democratic Oromia is not different from that of being a United States, (democratic) Ethiopian, or Canadian citizen. Therefore, propagating the formation of ‘democratic Oromia’ while disavowing the possibility of ‘democratic Ethiopia’ is a double standard.

Oromo’s democratic tradition holds perhaps the only hope to heal the wounds inflicted on people of that region by authoritarian Abyssinian rulers. The dividends of peace that can be earned from a just, multinational democracy outweigh the rationale behind rejecting an all-inclusive political system in Ethiopia. The robust Oromo democratic tradition lays a strong foundation for a system that overcomes old-age mischievous political practices. This is a lasting alternative to conceding to shrewd Abyssinian way or total avoidance of dealing with Ethiopia.

Authoritarian Habesha rulers excluded Oromo and other nations in the south from central power for far too long. They presented Habesha as morally superior race while Oromo and many indigenous people were thought of as mere inferior subjects. In many ways, they stole the Ethiopian entity from Oromo and others. To make matters worse, some among us followed that malicious track and disowned Ethiopia thereby validating Habesha’s conspiracy.

The Oromo hold the potential for the emergence of an all-inclusive democratic polity that can right historic wrongs and set a new standard of citizenship in which equality and democratic principles guide the political process.

Ethiopia principally belongs to the Oromo. Oromo’s egalitarian peacemaking tradition can transform Ethiopia into a prosperous, democratic, just and peaceful place for all to live. But Oromos can’t do it alone. In fact, such a future requires as much, if not more, from Habeshas including acknowledgement of historical wrongs and acceptance of a new political paradigm. That will be the foundation of a new political identity, which people from all backgrounds can wilfully buy into.

*Israel Fayisa is a former Oromiya Supreme Court judge. He can be reached at israelitansa@yahoo.com