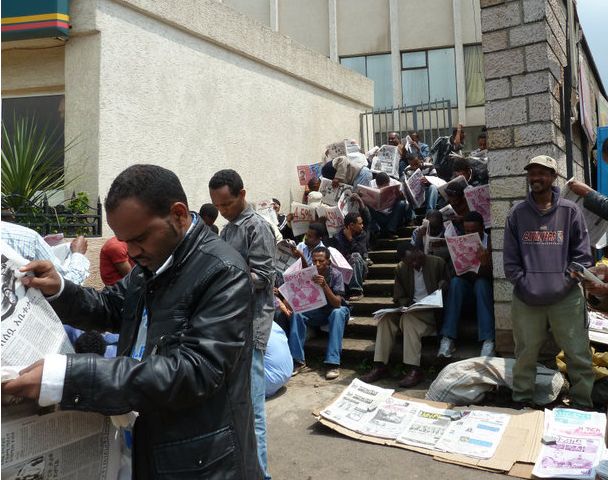 (OPride) — Ethiopia’s trials with press freedom and assembly have become almost proverbial. The government has devised several proclamations and directives to stifle freedom of opinion and expression.

As a result, dozens of newspapers and magazines have vanished into thin air. Dissident journalists are harassed, jailed or forced into exile.

The recent crackdown on six bloggers and three journalists, who now face charges of working with foreign human rights groups and using social media to incite violence, is but a fresh anecdote. The Ethiopian government has been jailing journalists, human rights activists and opposition leaders using its sweeping Anti-Terrorism proclamation. Only its archenemy Eritrea holds more journalists behind the bars in the continent.

In May 2012, authorities issued a directive requiring printing houses to remove any “illegal” content from their publications. The unduly broad provisions of the Anti-Terrorism Proclamation guaranteed any content, even those remotely critical of the government, could be deemed illegal. Almost all news, opinion and human rights websites are blocked inside the country. It is under this context that journalists, activists and politicians have been trying to raise the scepter of atrocities and rights abuses in that country. The government remains indifferent to international calls for liberalization and for opening up of the media environment.

“The fight against terrorism cannot serve as an excuse to intimidate and silence journalists, bloggers, human rights activists and members of civil society organizations,” said Navi Pillay, United Nations High Commissioner for Human Rights in a statement last month. “Working with foreign human rights organizations cannot be considered a crime. Over the past few years, the space for dissenting voices has been shrinking dramatically in Ethiopia.”

These legislations have also made it impossible for local and international human rights organizations to freely operate and investigate authorities actions. As a result, many have drastically scaled back their activities while others were forced to close down altogether. In order to make do under the circumstances, most independent journalists judiciously practice self-censorship, to the extent that many simply refrain from reporting on issues related to “democracy and human rights.” The press being handcuffed and the chocking of media houses have discouraged the public from coming forward and expressing their grievances and opinions.

“There is an evident desire among journalists themselves to improve professionalism and the quality of their media [but]…. many acknowledged that government pressure and self-censorship continue to hold down the potential for quality, independent journalism,” the World Association of Newspapers and News Publishers said in a report released last year. “Journalists have repeatedly expressed fears that they too could wind up in prison if they step beyond the boundaries of what is politically acceptable (even if the definition of political acceptability is ambiguous).”

Critical journalists are monitored by state intelligence, leading to an ever-present fear of reprisals and prosecution under the anti-terror law. As a result, most local media houses completely disregard reporting on “sensitive” topics, or simply provide one-sided coverage coloring their reports with developmental buzzwords.

The Oromo make up an estimated 40 percent of Ethiopia’s 92 million population. For decades, Oromo activists and leaders have been raising questions of freedom, justice and equality. However, many of these questions never received adequate responses in any meaningful way. The Oromo question remains the bottleneck of Ethiopia’s own existence as a state.

Addis Ababa, which Oromos call Finfinne, sits at the heart of the state of Oromia, for which it also serves as the capital. In recognition of this positionality, but more importantly the city’s historic significant among the Oromo, Ethiopia’s constitution guarantees “special interests” over the city to Oromia. For the last 23 years, Oromos have been asking the government to implement the “special interest” clause. But the government kept on turning deaf ear to these requests. Instead of allying existing grievances, the government came up with an “Integrated Development Master Plan,” as a means to gobble up more than 15 surrounding Oromia towns under Finfinne. This scheme to ‘annex’ more Oromo land in the name of “development” led to Oromia-wide opposition spearheaded by high school and college students.

Since April 25, 2014, students from various universities in Oromia have staged peaceful protests, urging the government to withdraw the plan and respect their state’s “special interest” over the city. Security forces brutally suppressed the protests, killing dozens of unarmed students, and leaving hundreds injured or behind bars.

The local coverage of the protests offer a best case study to look at Ethiopian media’s inherent, institutional bias toward Oromo stories. Given the foregoing discussion on Ethiopia’s challenging media environment, the dangers of balanced coverage are not contested. The government’s choke-hold on the media and fear of repercussions have discouraged journalists from visiting the scenes of protests and accurately reporting on the events. Ethiopia’s independent press is saturated in Finfinne, and many simply don’t have credible regional sources, especially in Oromia, who can feed them with the news of the protests. Besides, media institutions and some journalists consider approaching the protesters or contacting the victims’ families almost existential.

There is also an ideological bias toward “ethnic” based activism. In part this explains the reluctance among many journalists to visit some of the 15 towns included in the master plan and interview local residents and farmers. However, speaking to government officials and opposition politicians about the master plan, the protests and violent crackdown could have been done with minimum effort.

A closer look at reports by six web-based publications and three international correspondents reveals much not only about Ethiopia’s handcuffed press but also the deficiency of the so-called independent press itself. It took almost a month for most local outlets to offer basic, even if lopsided coverage on the cause of the protest and the causalities. Even considering the grim media environment, there were many missing links in those reports.

Others completely disregarded the matter and kept to their business as usual. For example, Addis Fortune, a weekly English newspaper with 10,000 monthly circulations, devoted only one single sentence to the protests its May 11 report about the master plan.

Awramba Times republished a video and text from EthioFirst blog. To his credit, the EthioFirst reporter went to the scene of protests in Ambo town. The online only publication provided coverage supported with text and videos of what it said were destroyed properties. It also interviewed residents of Ambo, students of the Ambo University and chief of the university all denouncing the destruction of property. The report’s focus on the damage caused to properties as opposed to the loss of lives and arrests of hundreds gives us a reason for pause. Besides, the reporter made no attempt to speak with protesters, victims or their families.

Others recycled government statements and news releases from opposition political parties. For example, both the English and Amharic editions of The Reporter made its first coverage based on government statements. The English edition of the newspaper tried to balance the story by asserting “independent observers and those who claim to be eyewitnesses say that the death toll and injuries might be higher than what has been officially admitted.”

Sendek Amharic newspaper, which gave its reporting five days after the protests began, referred to a press release from the opposition Oromo Federalist Congress (OFC) and later conducted interviews with the party’s leaders.

Addis Admas, another local Amharic daily, also did its initial coverage using government statement and anonymous sources from Ambo, Robe and Haromaya, where the protests took place. In a subsequent report on May 10, the paper reached out to a farmer residing in Sabata, one of the 15 towns included in the master plan, and offered local grievances over issues of compensation and threat to the farmer’s livelihood. Addis Standard, a local English magazine, also did its “best” by relying on sources from the universities where protests were reported, otherwise largely toeing the line from government statement.

Other newspapers offered sensationalized stories that reflect their bias more than journalistic inclinations. For example, on May 2, Addis Guday wrote, ‘Oromia: Gize Tebikiwu Yeminfeneda Bomboch-Yetameku ye politika bisotoch. Ye tebab bihertenynet tosoch’ roughly translated as ‘ Oromia: a ticking time bomb waiting to explode and a concealed political dissatisfaction. The scar of narrow-minded ethnicity” In all, almost no attempt was made to contact to the protesters or the farmers and residents affected by the master plan. And none of the aforementioned outlets treated the incident as a breaking news item.

Ethiopian journalism is still at its infancy stage. Restrictions against the press and physical harassment of journalist make it impossible to cover issues of public interest. The reliance on government press statement reveals the challenges of obtaining first-hand reports from the scene of the incident. The country’s ethnicized politics confounds the lack of impartial coverage. In a country where there is no single Oromo media outlet and given the jamming of diaspora-based websites, the Oromo are left with no voice so to speak. Dozens of Oromo newspapers and magazines that existed in the 1990s were either banned or forced out of business when Oromo journalists fled the country.

With a varying degree, both private and government media outlets share a common hostility toward Oromo interests. While some of the private media practitioners are in government pockets, others cater to non-Oromo political groups. The rest are far more concerned with making money and they know what their audience wants. “There is little independent media in Oromia to monitor these events, and foreign journalists who have attempted to reach demonstrations have been turned away or detained,” the HRW said. A case in point is the four-hour detention of Bloomberg’s William Davison on May 1, after attempting to report on protests that took place at Addis Ababa University.

In a nutshell, independent, objective journalism has essentially become a crime in Ethiopia. Given the highly restrictive media environment, Ethiopia’s “independent” press continues to teeter on the edge of death and survival. Under the circumstances, a lot of journalists have begrudgingly embraced the “developmental state” storyline. For others, strict self-censorship has become more of a norm. As a result, the professionalism and quality of Ethiopian journalism has been significantly compromised. Still more concerning is the inherent ideological and institutional bias toward coverage of “ethnic” stories, particularly stories about Oromo activism. The role of a journalist is to report on events as objectively and truthfully as possible. Journalists should act as non-participating spectators of events. When reporters become part of a story or offer their opinions, they are expected be transparent and issue a disclosure. These ethical values are rare in Ethiopia. However, if there’s any hope for future of Ethiopian journalism, Addis Ababa-based media houses should start checking their ethnicized and detached coverage of events outside of the capital.

Correction: The original analysis noted Bloomberg News “repurposed a government statement, with a passing reference to opposition leaders.” This was a mistake introduced during editing. The Bloomberg article leads with a comment from Bekele Nega, an Oromo opposition leader and references Fana BC on details of bomb blast at Haromaya University.

*The writer, Merga Yonas, is a journalist and graduate student of International Media Studies at Deutsche Welle Academy of Bonn Rhein-Sieg University. He can be reached at: yonasmerga@gmail.com