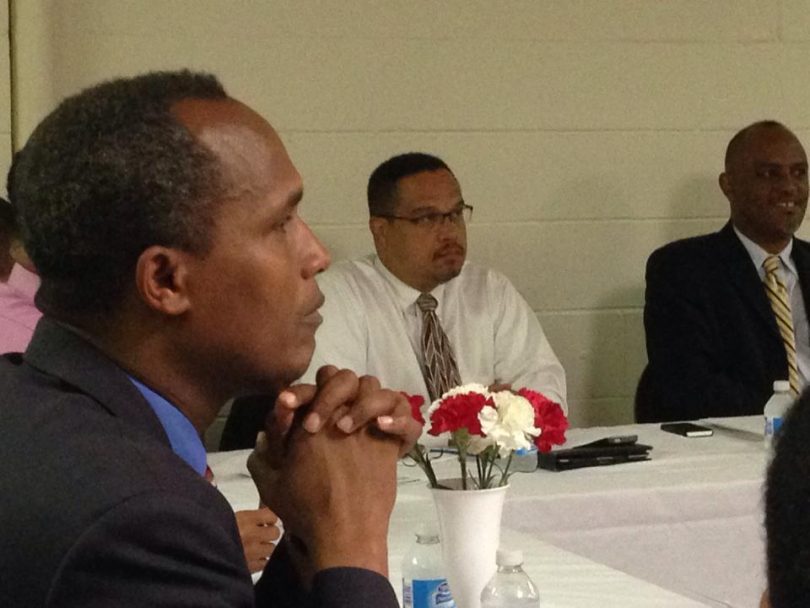 The Minnesota congressman joined members of the local community in Saint Paul, Minn. for an hour-long afternoon briefing on the state of human rights in Ethiopia.

Minnesota is home to the largest Oromo community in the United States. It is in recognition of the growing Oromo influence in the Twin Cities that the two-term congressman’s office organized the discussion at the community’s meeting hall. “Countries are not moral agents, including our own. However, at least here we can organize and change what the government does,” said Ellison, who also participated in a moment of silence in remembrance of those who were killed in Ethiopia.

“If you want the U.S. to act differently towards Ethiopia, organize yourself and take an active part in the political process; get ways to empower yourself economically and stay united as you are now.”

Dozens of people were killed last month following Oromia-wide protests that were sparked in opposition to plans to expand Ethiopia’s capital deep into the jurisdiction of the state of Oromia. Hundreds of students and activists have been arrested since the protests began in April in the continuing crackdown.

Last month, the Oromo Community of Minnesota (OCM) rallied at the state capitol and local youth activists joined with a three-day hunger strike pressuring the Minnesota House and Senate to issue a resolution that condemned the massacre of Oromo protesters.

Condemning the violence perpetrated against peaceful Oromo student protesters, the two chambers of the Minnesota Legislature, in their resolution, called on “the United States government to pressure the Ethiopian authorities to respect human rights and democratic process.”

The community’s ongoing mobilization drew the attention of Congressman Ellison’s office who requested the meeting with local Oromo leaders. Speaking to the new spirit of civic activism, Teshite Wako, who helped initiate the meeting, indicated that “We are learning and organizing and the time of ignoring Oromo concerns will soon be over.” “The Oromo, especially the youth, are dialoguing, mobilizing, and organizing like never seen before and the Oromo is bound to reap so many victories by sustaining the momentum and acting in unison, “ said Hassen Hussein, the executive director of the community who helped facilitate the meeting. Various community leaders and members of local Oromo churches, mosques, youth association, scholars and business owners attended the afternoon meeting at OCM.

In an opening speech welcoming the congressman, Mathias Gudina, President of OCM, noted, “by becoming the first Congressman and senior US government official to grace our community center with your presence, you have distinguished yourself as a great friend of the Oromo, thousands of whom are your constituents.”

The attendants shared heartfelt personal testimony on what is happening to their loved ones back in Ethiopia. Nagessa Oddo, a former prisoner of conscience, detailed his ordeals at the hands of the Ethiopian security forces after being detained for taking part in university student protests. “The Oromo are singled out and discriminated against in Ethiopia for being Oromo, and given its demography, poses the gravest threat to the minority group’s hold on power,” Oddo added.

“Even in the prisons the Oromo are singled out for harsh retributions.”

An American woman who went to Ethiopia to be with her family for the Muslim holiday in Addis Ababa recalled the harrowing searches, the dehumanization, and beatings she experienced on her away to the Grand Anwar Mosque. They asked the congressman to put pressure on appropriate authorities so that those responsible for the killing are held to account. The congregants demanded the following, which the congressman promised to deliver:

The congressman pledged to continue engaging with the Oromo community and encouraged them to get organized and partake in local politics. He stressed that in America only an organized community can achieve political objectives. Members of the community thanked the Congressman for taking the most difficult issues in Congress and ably representing the most diverse district in Minnesota.

In a related development, Senator Al Franken wrote a strongly worded letter to John Kerry, the US Secretary of State. Noting, as the country heads to the 2015 elections, that “there is considerable concern about whether those elections will be genuinely free, fair, and open,” Al Franken, in the letter, urged Kerry to make “respect for human rights in the government’s treatment of all ethnic groups central to our relationship.”

Minnesota’s other senator, Amy Klobuchar, is expected to join Senator Al Franken and Congressman Keith Ellison in condemning the killings in Ethiopia and urge the Ethiopian authorities to institute a political system accountable to the will of the people.