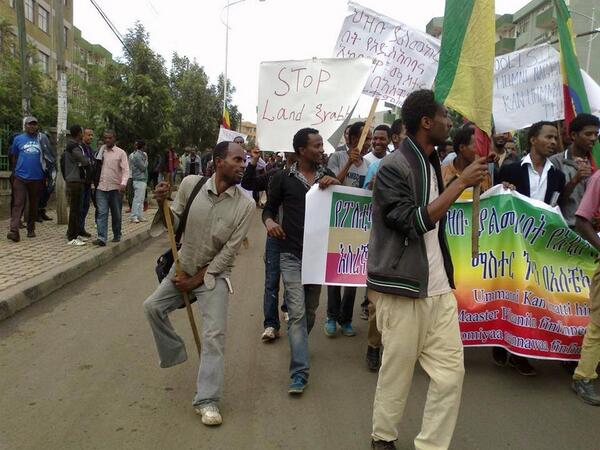 The resolution allows local government agents to intercept any communication with ‘suspected’ persons.

Since April 25, students across various Oromia-based universities have been protesting against the Ethiopian capital’s expansion, which they say would displace Oromo peasants from vital farmlands to make way for a state-led development. Dozens of student protesters have been killed and many others wounded by security forces. An unknown number of students have been imprisoned or dismissed from their studies in an ongoing security sweep intended to stump out the fervent opposition.

The current resolution, which was formulated by order from the higher echelons of the ruling party to muzzle all forms of dissent in Oromia, has been copied to all zones in the region, according to a resident of Dembi Dollo, who requested anonymity for fear of repercussions. It aims to silence any individual who opposes the master  plan, the source said.

The town of Dembi Dollo serves as the political and economical epicenter of the Kellem Wallaga Zone. It’s also one of the towns where the government faced a strong resistance against the proposed master plan. The resolution aims to clampdown on those who “condemn their policies” and also meant to warn the public against any support, the source added. In order to enforce the new directive, the regional government have deployed “more forces from police training camps before they even finish their training,” according to locals.

The resolution gives local authorities the “legal pretext” to eavesdrop on “short message service and mobile internet history” of those suspected of anti-government activities, according to this informant. Locals fear that the unprecedented bill will give pseudo local officials the impunity to lock up critics, real or imagined, at the snake-infested Dhidheesa federal prison.

In a detailed report last April, the Human Rights Watch noted the disproportionate targeting of Oromo activists in Ethiopia’s surveillance program. “A significant number of Oromo individuals have been targeted for unlawful surveillance,” the Human Rights Watch noted. “Those arrested are invariably accused of being members or supporters of the OLF…but in the majority of cases, Oromos were under surveillance because they were organizing cultural associations or trade unions, were involved in celebrating Oromo culture (through music, art, etc.) or were involved in registered political parties.”

Dembi Dollo’s district 4, dubbed the ‘enemy base’ by local officials, remains as the vexing point for regional government officials. It has also become normal to hear gunshots in the town, which has left the public in dire situation of insecurity. For instance, last week gun shots were heard three times in District (Kebele 02) behind the old bus station and no one could say who fired the shots and why. The unpredictable state of affairs have also created fear among the local security officers, who are now busy checking their own officers guns, according to local sources.

Human rights groups and activists continue to denounce the killing and arrests of the students and protesters. In its May 13 report, the UK-based Amnesty International noted, “many hundreds of protesters are reported to have been arbitrarily arrested, and are being detained incommunicado and without charge….detainees are at risk of torture.” But the ongoing security clampdown has received little media attention. The current resolution is likely to facilitate the ground for security officers to hunt, arrest and torture all those perceived as a threat.

The Oromo, Ethiopia’s single largest ethnic group, make up the majority of the Horn of Africa nation’s population. The Ethiopian regime, now in power for two decades, is focused on state-led development that critics say ignores human rights and press freedom. A part of this initiative, the controversial master plan to expand Addis Ababa’s territories will convert massive land currently held by subsistence farmers into large-scale industrial zones by uprooting the locals’ livelihoods.

*The writer, Merga Yonas, is a journalist and graduate student of International Media Studies at Deutsche Welle Academy of Bonn Rhein-Sieg University. He can be reached at: yonasmerga@gmail.com